Former Essendon full forward Matthew Lloyd has bee diagnosed with Bell’s Palsy. This is significant given that 2021 saw an alarming rise in sportsmen having on-field heart attacks, and he is the sixth high profile Australian to suffer an adverse reaction to the Covid jab within the last fortnight.

The exact cause of the condition is unknown, but it’s believed to occur when cranial nerves become inflames or swollen. It is most often temporary and can be treated through the use of oral steroids.

Speaking to the Herald Sun, Lloyd recounted the moment he suffered from the condition and was subsequently diagnosed.

“‘I had visited my parents and my right eye wouldn’t stop watering,” he said.

“It was about 6pm and I said, ‘Lisa (Lloyd’s wife) I’m not feeling too well’. I couldn’t control the spitting and I lost control of my mouth and could sense my right side dropped.

Lloyd initially feared he was suffering from a stroke, but he was eventually diagnosed with Bell’s palsy.

“I can’t blink, the eye might shut about 40-50 per cent and it dries out so I have to lubricate the eyes every hour,” Lloyd said.

Bell’s palsy affects roughly one in every 65 people.

In 2021 NSW Customer Services Minister Victor Dominello notably did a press conference with a droopy eye. The vaccinated Dominello was also diagnosed with Bell’s Palsy. 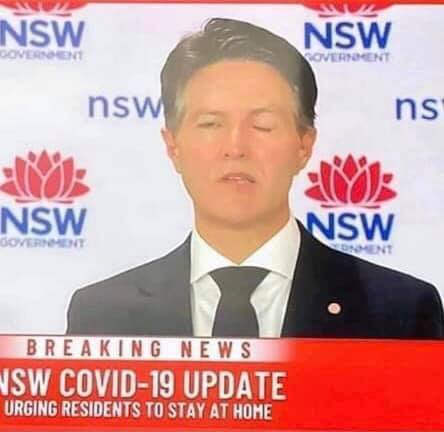 XYZ News has not been able to find any information on Lloyd’s so-called “vaccination status”, but we’re prepared to take a punt. It kinda fits a pattern: 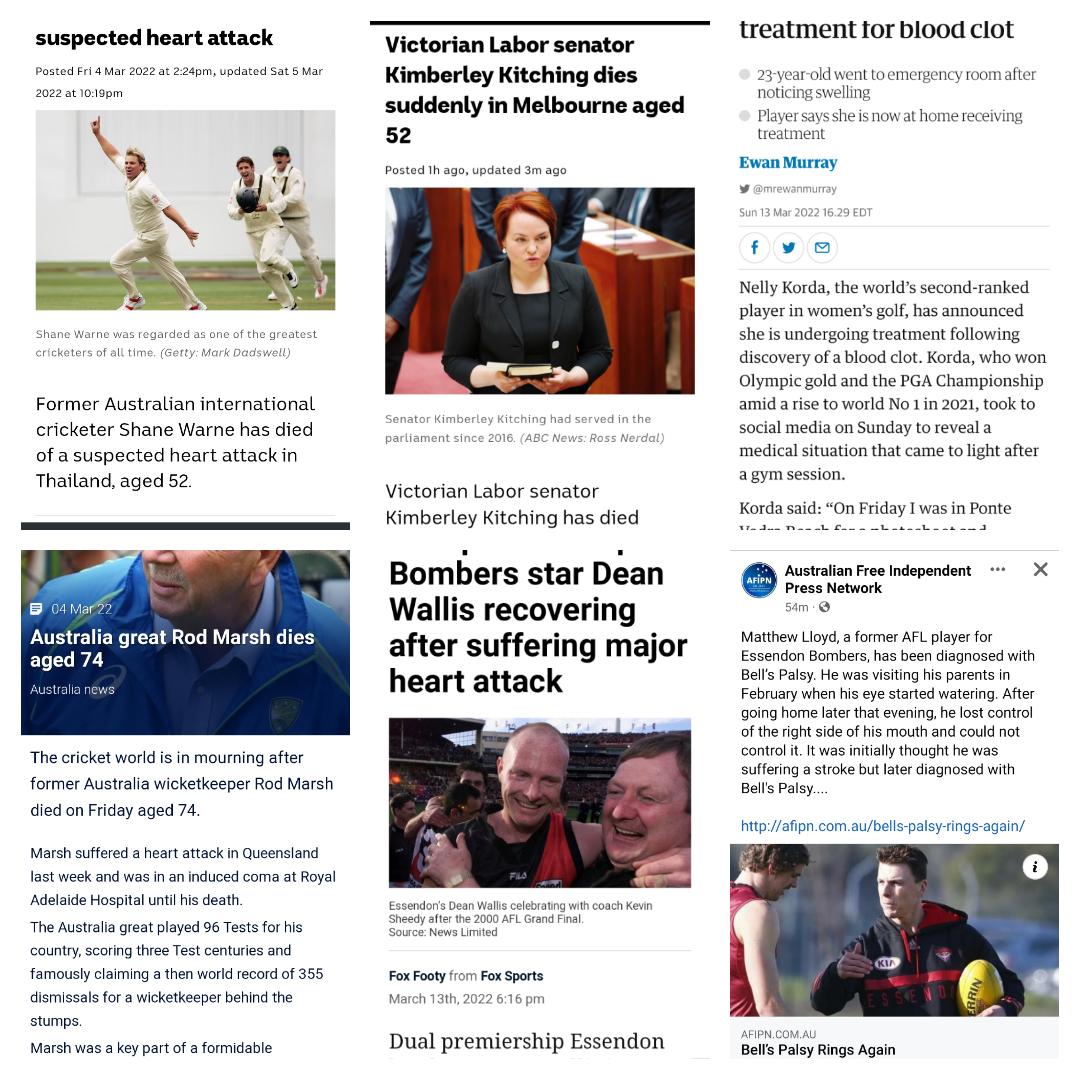 Obviously, this is too many adverse reactions to too many high profile Aussies in too short a period of time to be ignored, so the Lying Press has to find a way to acknowledge it without acknowledging it:

The sudden heart attack deaths of cricket legend Shane Warne and Senator Kimberley Kitching exposed how many people have missed out on getting health checks during the pandemic.

That they were both aged 52 and died within days of each other has made people in middle age take notice, added to by the heart attack also just suffered by ex-AFL player Dean Wallis.

Wallis, eerily also aged 52, survived and had emergency heart surgery. The two-time premiership footballer who played 127 games for Essendon is reportedly recovering well in Bendigo Base Hospital in Victoria.

But the Heart Foundation has been warning for months that more deaths from heart attacks in Australia were inevitable as 27,000 heart health checks were missed or delayed because of Covid-19’s affect on the medical system.

This is one of the more ingenious lies I have seen from the Lying Press regarding their excuses for the inexplicable rise in heart attacks. I’ve seen some doozies. 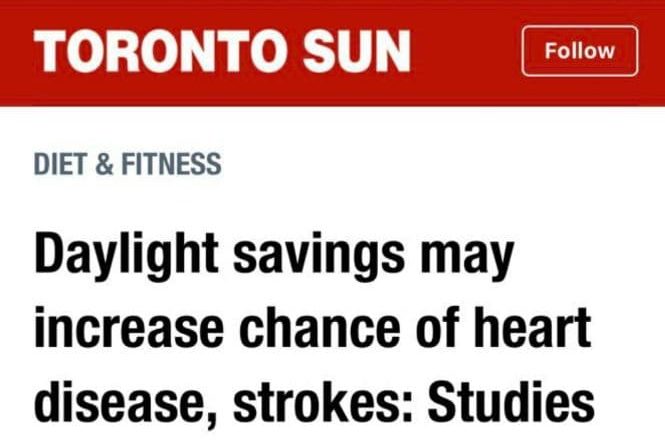 However, this one mixes a lie with the truth, hence why it is so effective. Of course people have avoided going to the doctor during lockdown, and of course this has affected people’s health. This was by design. It was an intended consequence of the lockdowns, and it is happening globally. All the flow on effects of the lockdowns – the shortages, longer waiting times, inflation – are designed to cost lives.

It is how you start a genocide without making it look like you’re starting a genocide. This cost in lives caused by fluctuations in the economy is well documented and is even acknowledged by the Hellmouth:

Regarding the effect of the vaccines, they may well be intended to reduce fertility and induce VAIDS. Whether the adverse reactions are an intended consequence, a bonus feature, or just good old fashioned medical negligence remains to be seen. Curiously, Google is actually allowing an article on Pfizer’s almost 1300 listed adverse reactions to slip through the algorithm.

After nearly a year of being pestered, shamed, coerced and guilted into receiving one of the COVID-19 vaccines, Joe Biden on Jan. 4, had the nerve to say there is “no excuse for anyone being unvaccinated.” With the proof in black and white from the U.S. Food and Drug Administration itself, we actually have 1,291 “excuses” to remain unvaccinated, Mr. President….

The recently released information includes 42,086 serious case reports, occurring in the first three months of the vaccine rollout and summarized in nine single-spaced pages entitled “Adverse Events of Special Interest.” Which means, since the end of February 2021, these side effects have been known. Yet to this day, all we hear from medical professionals, and those in public health authority is that the vaccines are safe. Additionally, there is the truly outrageous fact that the vaccine companies are completely immune from liability.

So you’re saying the jab is an experimental gene treatment which literally alters people’s chromosomes and it’s not a conspiracy theory.

Remember when all those conspiracy theorists were posting their concerns that the new mRNA technology could change one’s DNA? And then all the “fact-checkers” were working overtime to label those dangerous posts as misinformation? But all the while, the FDA knew that this syndrome was a possible side effect of the vaccine. 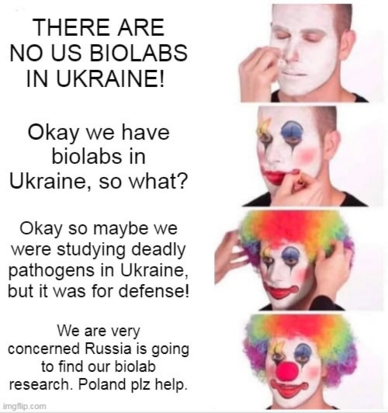 The list of hard-to-pronounce adverse events is presented in alphabetical order. A few I picked out that sounded familiar are arterial thrombosis, autoimmune endocrine disorder, cardiopulmonary failure, central nervous system lupus, colitis ulcerative, early infantile epileptic encephalopathy, multiple sclerosis, myocarditis, rheumatoid arthritis, testicular autoimmunity, and vagus nerve paralysis. The events were classified as either serious or non-serious, however only serious cases were included in the report. There were over 22,000 serious general disorders reported, 14,000 serious nervous system disturbances, 8,000 serious musculoskeletal and connective tissue disorders and 7,000 serious gastrointestinal disorders. The words autoimmune and thrombosis showed up a lot on the list. There were 270 “spontaneous abortions.”

“Cardiopulmonary failure” and “myocarditis”, both openly admitted. Note though how they won’t openly acknowledge the link to the spate of health issues affecting high profile ticket takers across the world for no reason whatsoever. 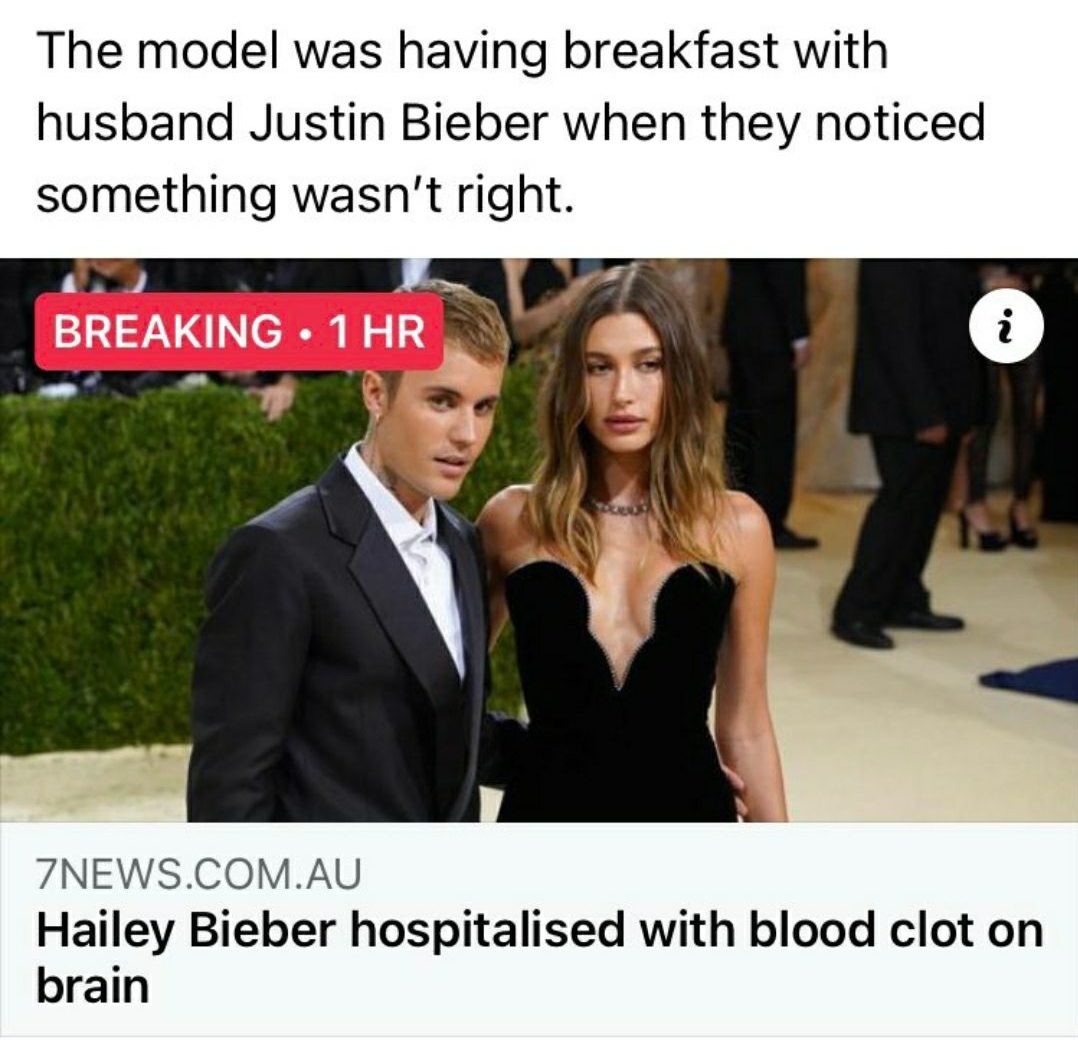 The role of the Lying Press is to keep us constantly disoriented, providing conflicting information and above all maintaining a state of constant fear. Hence they allow a trickle of truth to slip past the gatekeepers without ever connecting the dots, while simultaneously pushing the fourth jab. 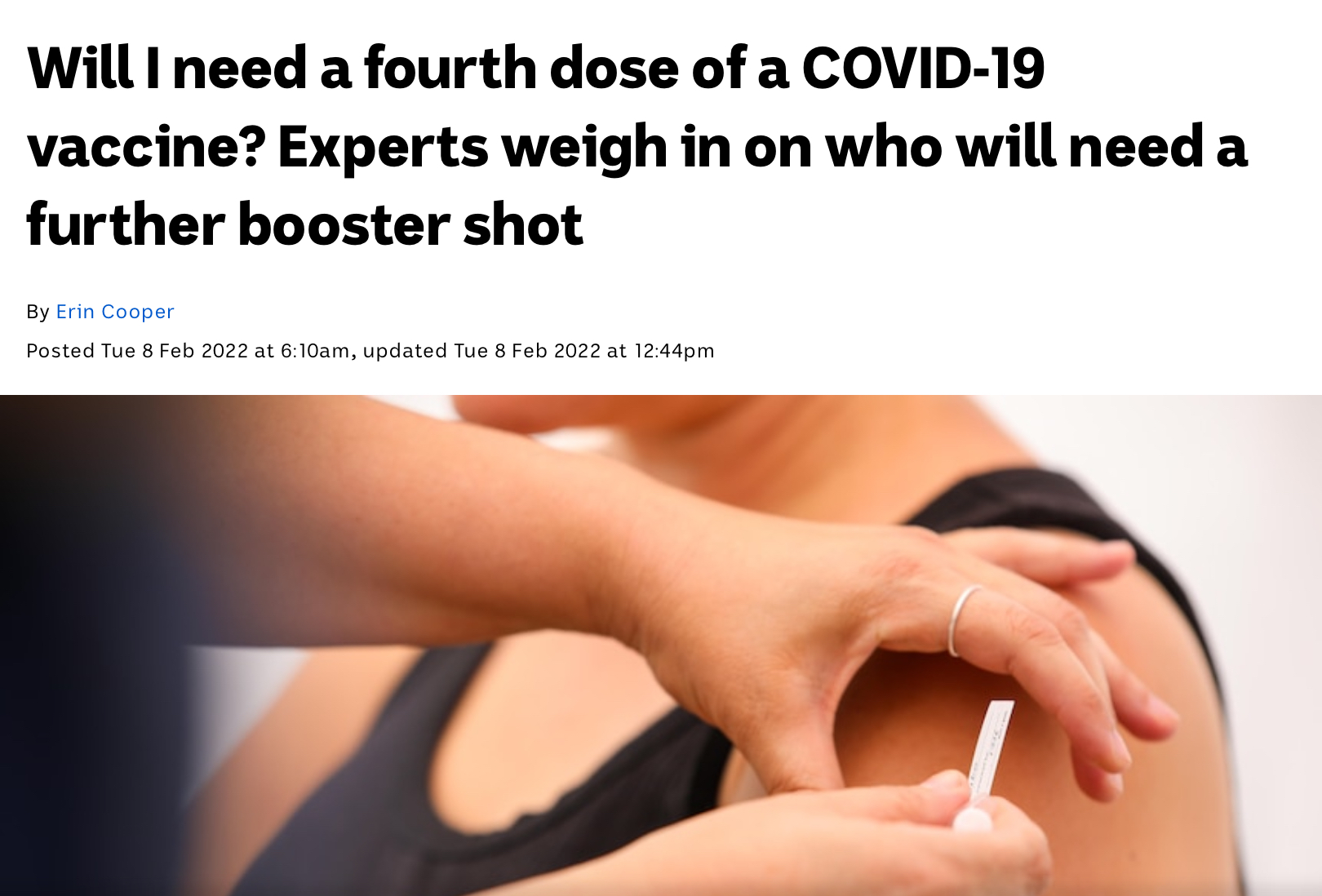 Above all, you must sacrifice yourself for globohomo.