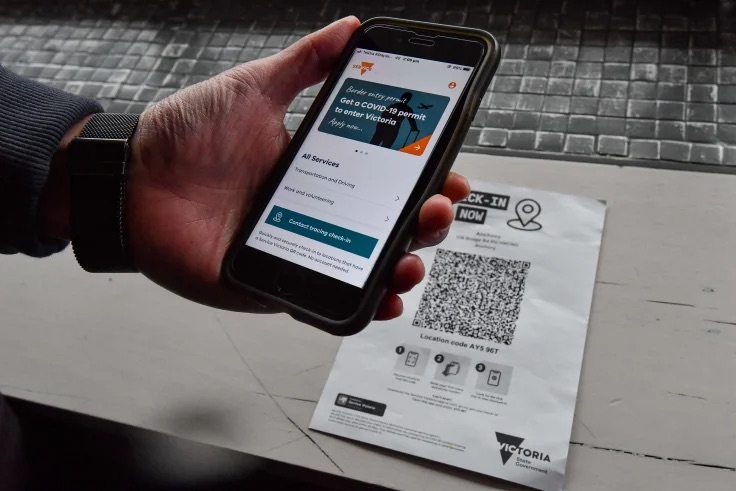 Bumbling Brett Sutton’s infamous admission, that if the Victorian government can’t enforce check-ins they’ll scrap them, could very well come back to haunt him:

The Department of Jobs, Precincts and Regions met with hospitality and retail groups on Friday to discuss how making the Covid-19 booster mandatory might affect their staff and customers, The Age reported.

A third jab could be required meaning that unvaccinated and double-jabbed residents would no longer be allowed to visit hospitality venues.

You’re only ever one booster away from being unvaccinated.

During discussions, the group, which included National Retail Association, Restaurant and Catering Industry Australia and the Franchise Council of Australia, also spoke about the future of QR codes.

There were talks about their usefulness, with health authorities less reliant on the app as they scale back on contact tracing and shift their focus to high risk close contacts.

According to data obtained by The Age, there’s been a huge drop in Victorians using the Services Victoria app to check into business and venues, with 800,000 fewer QR code check-ins recorded during the second week of January compared to the first week of the year.

Regarding overall check in figures:

That’s a tad over a 3% drop. January is generally pretty slow and people do use other methods to check in, but a downward trend is apparent and it’s nothing to sneeze at (yes, that pun was 100% intended.) Victorian retailers are certainly taking it seriously:

“It’s a very polarising topic,” she told The Age. “When this was in place last time we had members who were having human excrement smeared on their windows, they were hiring their own security and people were being attacked. We have great concerns about having to go through that again.”

XYZ News has reported multiple instances of people lashing out, including pushing a so-called “Covid marshal” down an escalator, arson attacks on Covid infrastructure and self immolation. These are just the tip of the iceberg, with tens of thousands of incidents occurring across the state.

The Victorian Regime has outsourced the enforcement role for its check-in regime to ordinary people, ie it is relying on its subjects to enforce tyranny on one another because it doesn’t have the resources to be everywhere all at once. It makes examples of the occasional rule breaker, hoping that it will intimidate others into compliance.

However, it’s not working. Increasing numbers of retail staff are looking the other way when people don’t check in. Tens of thousands of aggressive incidents have intimidated retailers to the point where they are more scared of their customers than they are of the Victorian government.

What this means is that tantrums and tirades by irate customers are not immature, unfair or counterproductive. They are coldly calculating, effective, and a winning strategy.