We’ve had a small victory. As usual, we have to read between the lines to find it:

The manufacturer of the AstraZeneca COVID-19 vaccine has confirmed the contract in place with the federal government will be fulfilled, and that manufacturing will go on into 2022.

It came after reports that vaccine production would halt in Melbourne by the end of this year, due to the demand for Pfizer and Moderna.

However, a CSL spokesperson told Nine’s Izabella Staskowski that manufacturing would continue into next year and the full contract for 50 million doses would be met.

Any excess jabs will go to neighbouring countries, under a decision made by the Federal Government and backed by CSL…

Mr Hunt named Fiji, Indonesia, Vietnam, and Papua New Guinea as countries that could benefit from the ongoing manufacturing.

If they’ll take the poison. Now for the necessary juxtaposition, otherwise known as cramming opposite words together in the vain hope that nobody will notice.

The safe and effective vaccine received a lot of criticism despite being approved by the Therapeutic Goods Administration (TGA).

At one stage, Queensland Chief Health Officer Jeannette Young told people under 40 not to get the AstraZeneca vaccine, even though it was approved for use by ATAGI.

If it is safe and effective then why would a CHO say it’s not? If the risks of blood clotting were so minimal – a claimed 4-6 per million – then why would a Chief Health Officer recommend people under 40 don’t take it? Chief Health Officers are literally the people being held up as the arbiters of whether we get to visit grandma. This isn’t some weirdo on the internet we’re talking about here.

Yet concerns about the efficacy of a Covid vaccine have caused a contract with a major vaccine manufacturer to not be renewed, with excess stock to be palmed off to whatever third world neighbour will take it.

What this tells us is that concerns about the safety of “safe and effective” vaccines are real, they are warranted, and that activism about their dangers has caused tens of millions of AstraZeneca doses to become worthless in Australia.

Australian data bears out the danger of vaccines in Australia. Data from Europe is showing alarming excess death rates amongst the young, ie from vaccines. Politicians are deliberately fudging the numbers of people hospitalised woth Covid and who have died with Covid who are vaccinated. The latest example comes today from Victorian Deputy Premier James Merlino, who very carefully claimed that of the people hospitalised with Covid yesterday, 90% were not “fully vaccinated”.

That’s what I deduce from his info. pic.twitter.com/XiJuX8tiEk

Given that “fully vaccinated” is classified as having had two doses of a Covid vaccine, with the second dose being administered at least two weeks ago, this could very well mean that every person in Victoria hospitalised with Covid has had at least one jab.

Basically, they are lying to us about the numbers and the danger of the vaccines, and the Lying Press is doing everything it can to make it look like AstraZeneca is doing anything but fleeing Australia with its tail between its legs. 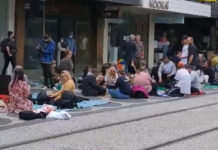 Do you have a licence for that picnic?