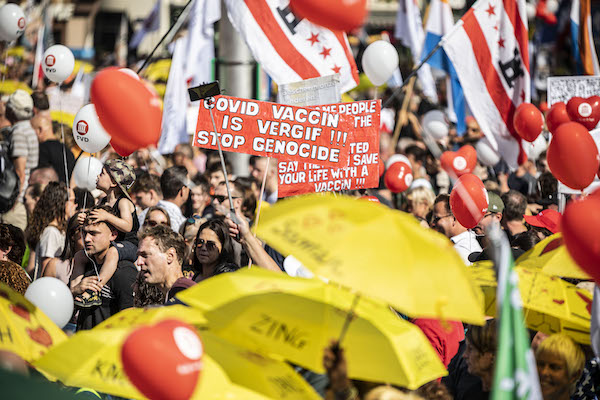 Yesterday 150,000 people took to the streets of Amsterdam to protest the government’s proposed policy of requiring vaccination as a condition to entry for businesses such as bars and restaurants. This approach mirrors the hard line already taken in France which has seen widespread unrest as a consequence.

But if the media was your main source for information, then either the Amsterdam protest did not happen or the numbers were dramatically downplayed. A colleague who attended the protest said that when he got home he turned on the main news bulletin to see how the media would spin the events in which he had firsthand knowledge.

The protest didn’t even make the news.

Eventually there was some coverage on smaller Dutch sites, such as this one, but the numbers were hugely downplayed as already stated.

More than 20,000 people took part in Sunday’s demonstration against the government’s coronavirus rules, city officials say. The organisers had said they expected 50,000 people to take part in the protest.

I work with many emergency services personnel and my contacts said that the numbers were at least 150,000. The crowd apparently was well behaved and in good spirits but the numbers clearly show that ordinary Dutch people will broke no further tightening of the totalitarian rule-set under the guise of a supposed pandemic. The same day, 70,000 Dutch crowded into the country’s small race circuit for a memorable grand prix race, putting the face to the lie of the true state of affairs as regards pretend disease.

But the ordinary citizens who are protesting the loss of their rights are being portrayed in a controlled and consistent manner by the media.

The demonstrators ranged from people claiming the government is creating ‘medical apartheid’ by introducing coronavirus passes for events, to anti-vaxxers, conspiracy theorists, and extreme right-wing groups.

Focus on the use of ‘extreme right-wing groups’. That is now the preferred moniker for anyone who opposes such arbitrary impositions on their lives and persons. Other Dutch media did away with any mention of simple anti-vaxxers and labeled the entire crowd as right-wing extremists.

To their detriment. The media still seems to think that extreme right-wing is an insult. But with so many ordinary people seeing with their own eyes the active deceptions in place and the attempts to directly stigmatise them, all this is doing is propelling those same people to begin embracing the attempted ad hom labeling. If simply protesting the draconian attacks on fundamental rights makes you extreme right-wing, then maybe extreme right-wing is the place to be. And perhaps people will then gravitate to extreme right-wing parties. After all, if you can’t escape them then you may as well join them.