A Victoria Police spokesperson has told one of Australia’s leading newspapers that extreme anti-lockdown extremists have been trying to find out the identity of officers who were forced to discharge their weapons on violent rioters in Melbourne’s CBD on the weekend. 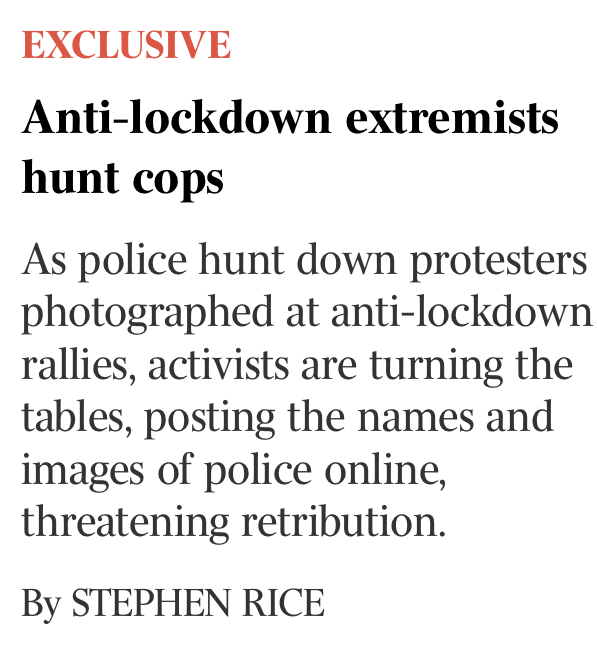 Fake news had been circulating on encrypted chats and fringe websites that one man suffered internal injuries as a result of being hit by rubber bullets at close range during the riot. 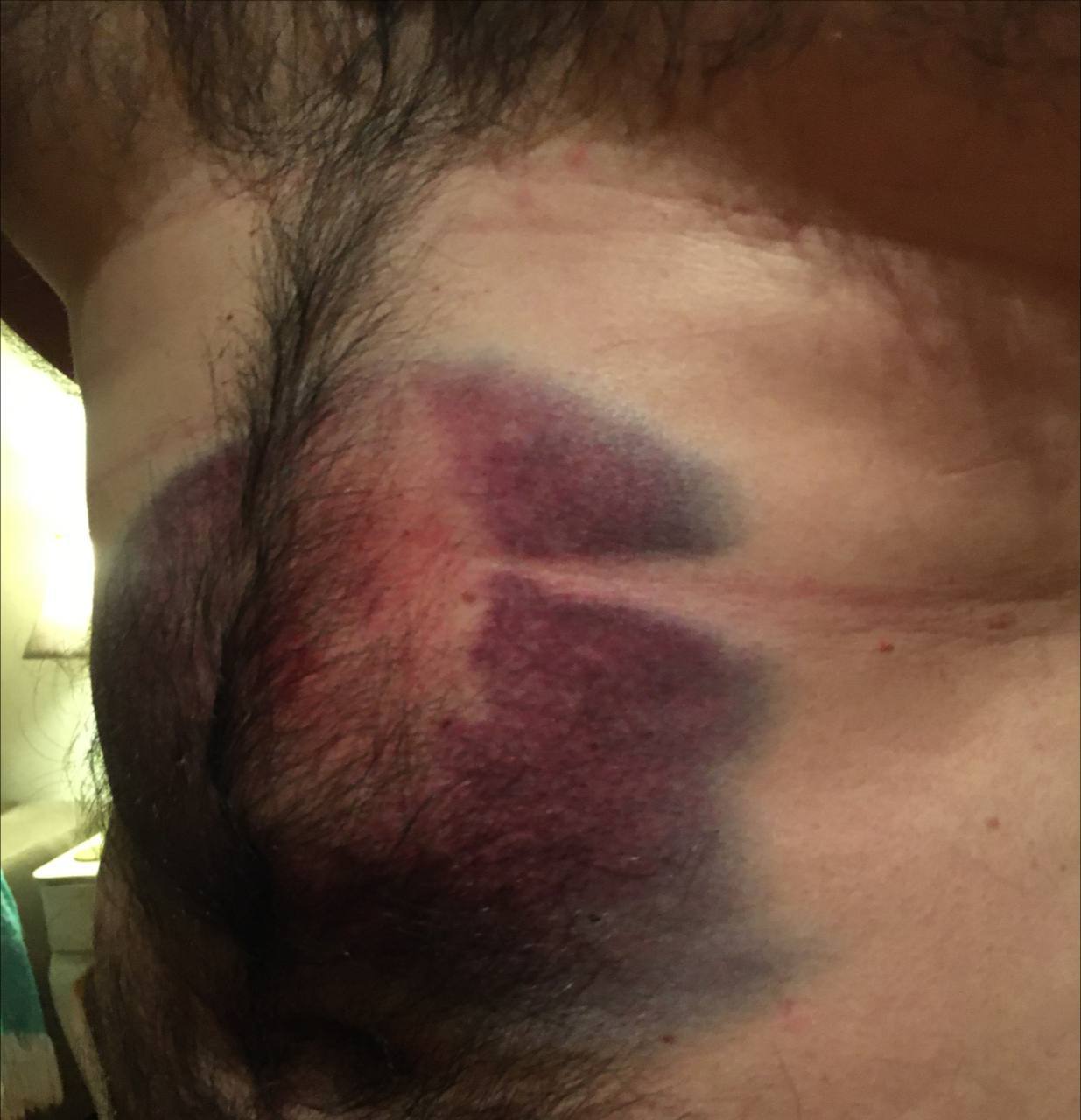 I was one of the ones shot with pepper pellets in Melbourne and then with a rubber ball bullet from less than three metres away.

I am a peaceful person and human rights activist who has been speaking up about the dangers of lockdowns for our children and businesses and I always attend the rallies to ensure that everyone is calm and peaceful.

I put myself in the firing line when I saw the guns drawn as there were children and elderly people in the crowd and I did not think for a second that our police would open fire on unarmed civilians.

I now have a 2cm x 4.8cm internal tear in my abdomen and internal bleeding. The emergency ward doctor said that if it had hit my chest or other parts of my stomach I would of died and if a child had been hit they would of died too. This should never ever happen again. We must find peace.

Angry unemployed losers and incels have responded by sharing photos the badge numbers of brave polices officers who risked their lives to defend public safety by firing rubber bullets at protesters at close range. 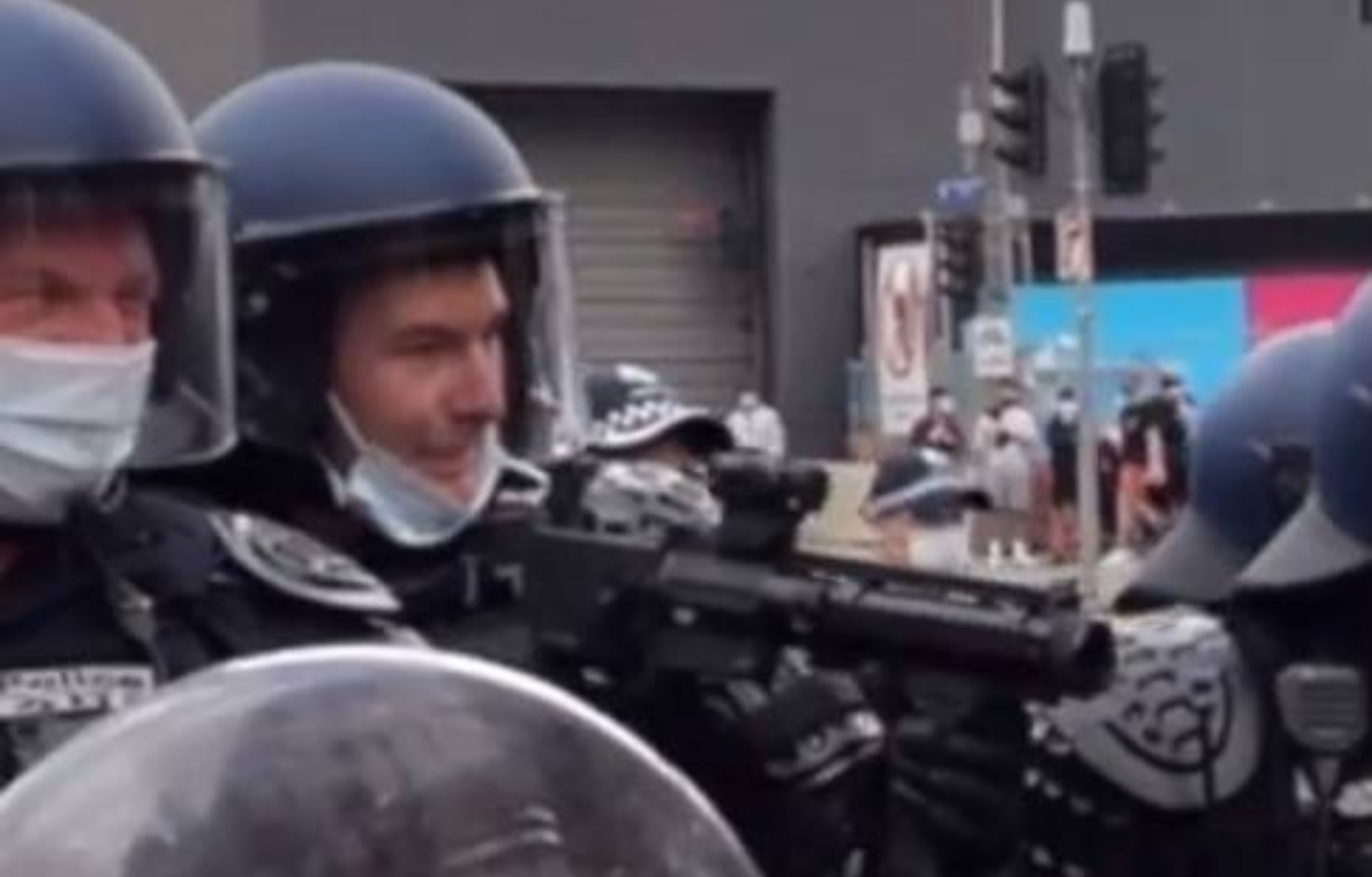 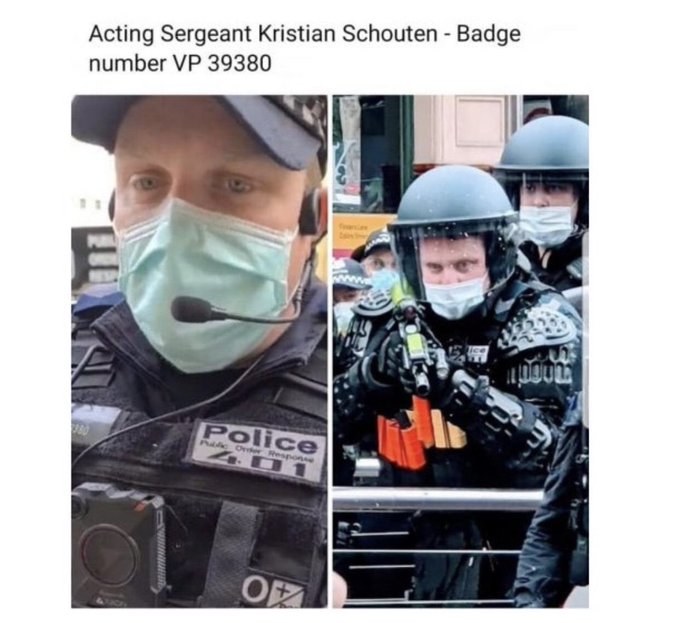 One police officer has even received letters using such threatening terms as “democratic system” and “responsibility”, accusing him of being a “bully”. 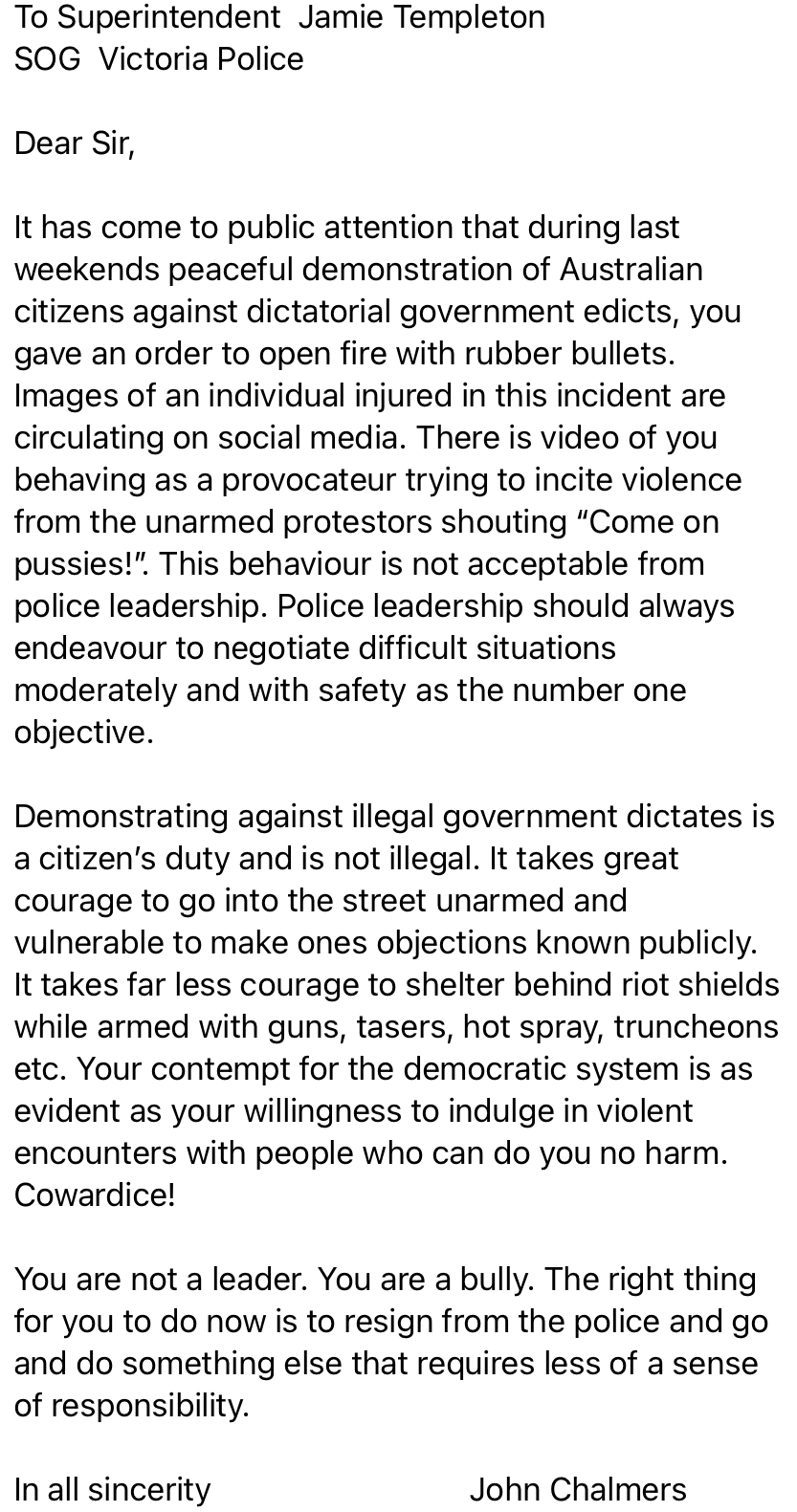 The accusations are based on video footage which has circulated on BitChute, a haven for hateful extremists.

The Victoria Police spokesperson had the following to say on the matter:

Citizens under our jurisdiction have to understand that only we have the authority to dox people. An example of good doxxing is how we recently colluded with Channel 9 and terrorist group Antifa to reveal the identities of extreme far right extremists. We did so to protect the Australian community from their message of hate. It’s hateful to be White.

Similarly, we had to shoot extreme anti-lockdown extremists in the stomach at close range with rubber bullets because we had to protect the Australian public from their hateful, selfish refusal to follow the rules.

If these angry men and incel losers don’t understand this already, let me make this really, really clear:

It’s okay when we do it, but it’s not okay for you to do it.

The Victoria Police spokesperson also said that those who have had at least one Covid vaccination shot now have the right, under measures which are hoped will reopen Australia’s economy, to wish death upon those who do not follow the rules. 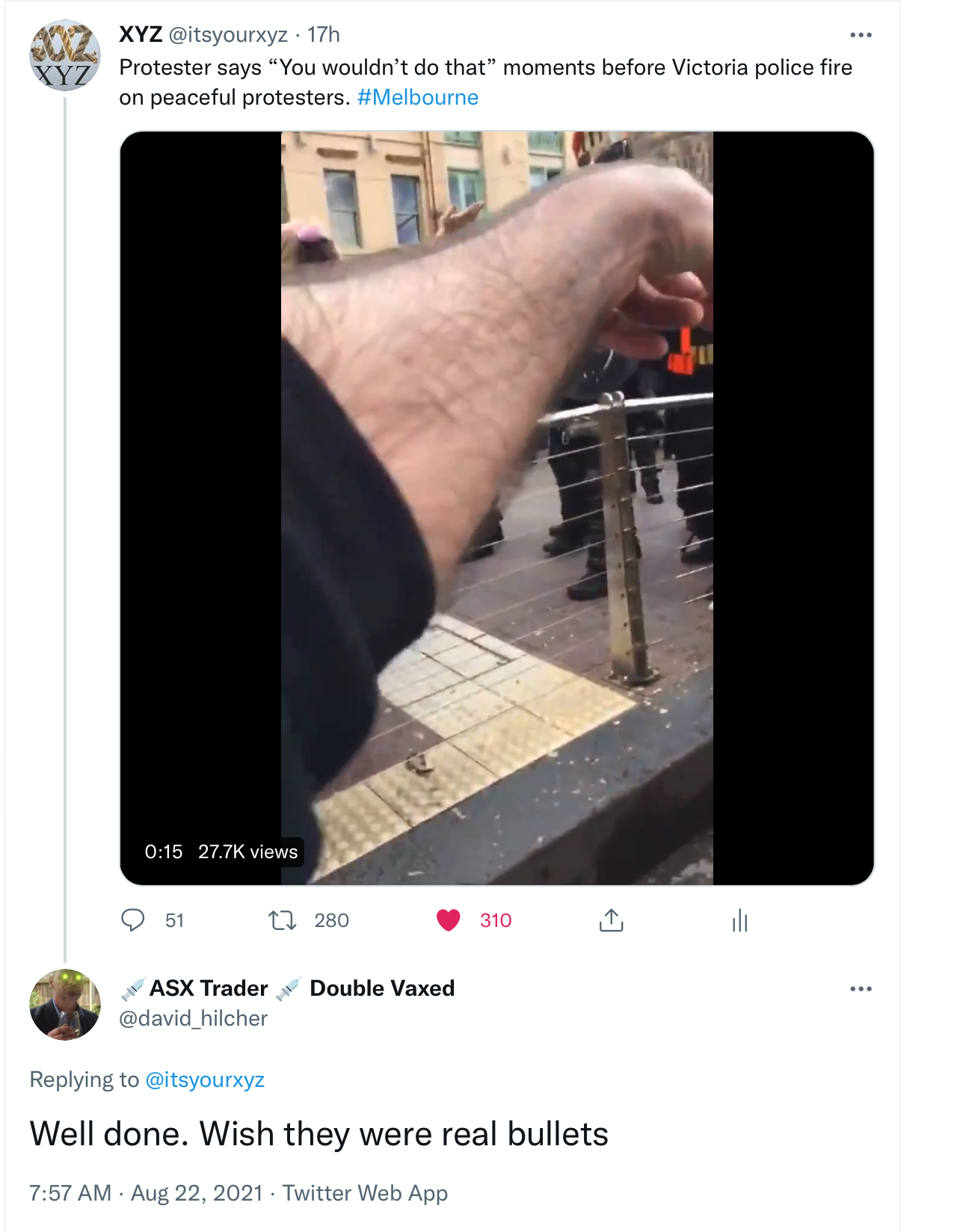