Roosh has made the following observation on Twitter regarding the way the state is contracting out the role of mandating unnecessary and harmful coronavirus vaccines: 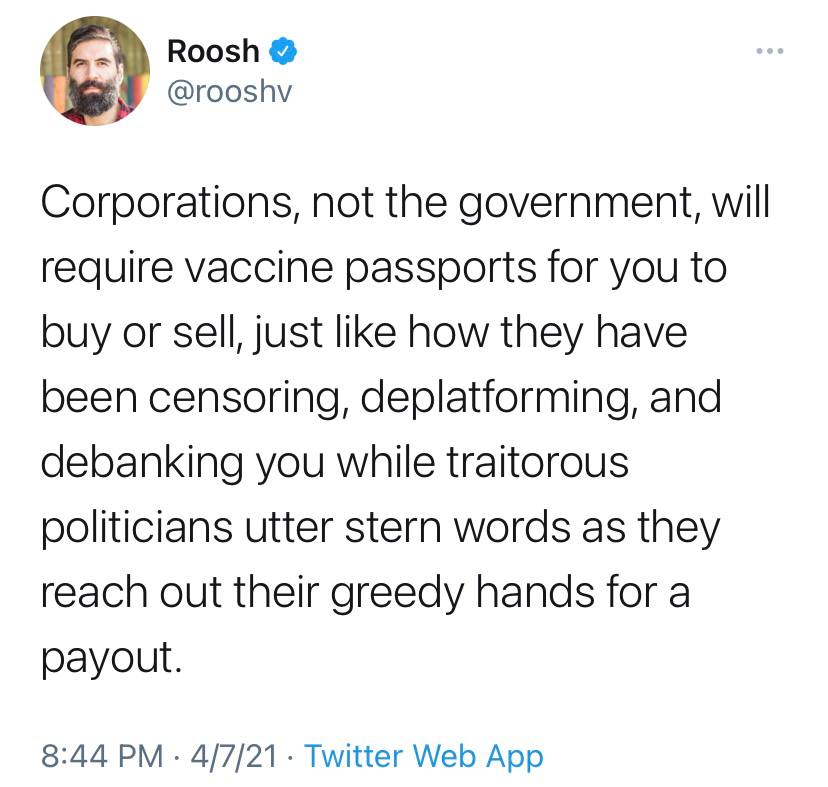 Just Red Pills v2 expands on this, highlighting how libertarian argument has been hijacked by communists:

Watch how many Libertarians, AnCaps, and “Conservatives” attempt to justify this by regurgitating phrases like “private businesses should be able to do anything they want” or “would you rather have the government tell you what to do”

The communists have simply modified their positions so corporations impose their totalitarian policies instead of the government.

Libertarian ideology has no answer to demographic replacement and it has been powerless to stop Western governments systematically stripping citizens of our rights during 2020-21.

Matty’s Modern Life notes the insidious nature of corporations – by their very nature they reinforce the power of the state and are in turn reinforced by the state:

If “libertarians” actually wanted a “free market” they’d be calling for an end to all corporate law, thus the end of what we call a corporation.

These are all creations of the state, so when they censor us or refuse us business and the state does nothing about it, they are indirectly enacting the will of the state.

You can’t have a “free market” while you also have state created monstrosities that can use their privileged position to create monopolies and abuse people indirectly.

All business should be either sole traders or direct partnerships, at most trusts where all the beneficiaries are clearly listed.

This may mean we take a short term economic hit (maybe not though), but the long run benefit is more competition, more jobs, and monopoly/oligopoly becomes all but impossible.

The only people who truly lose out are major shareholders of corporations, their executives, and the politicians they buy off, so nobody actually loses but the super rich and parasitic.

The truth is, libertarians don’t care about liberty at all, they really only care about their own degeneracy, which is nothing but slavery to sin.

Matty’s last sentence is the crux of the matter. If your focus is on the fulfilment of personal pleasure the result will be slavery to your desires rather than freedom.

If you want to oppose the system, join the organisation the system is most obsessed over. And get engaged in collective action to secure the existence of your people.

People have had enough. pic.twitter.com/870XHfXFuU