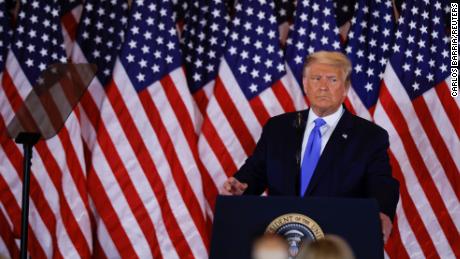 For an entire week the media the world over has attempted a coordinated gaslighting operation to convince their dwindling viewership that Joseph Biden won the 2020 US Presidential Election.

Gaslighting is a method used by an abuser to alter the sense of reality of their victim. Generally this is done by twisting the truth of something that happened in the past, or denying that it even happened. Skilful abusers can alter reality immediately after it happened, and really skilful, or desperate, abusers attempt to alter reality in real time.

Problems occur for an abuser when their victim steadfastly refuses to accept their alternative version of reality, and instead cuts off contact in oder to live their own life according to truth and an acknowledgement of reality as it actually is. We refer to this process as ‘taking the red pill’.

In 2016 the people of America rejected the false reality presented to them by the media which told them that Hillary Clinton had a 90% chance of winning the US Presidential Election. The abusive media responded with predictable tactics, issuing non-apologies pledging to do better next time before switching to a new lie – Russia hacked the election – and repeating this fake news over and over again.

Popular elections have been a constant thorn in the side of the media’s attempts to alter reality. Western bureaucracies and legal systems, otherwise known as the Deep State, can do their best to disrupt the political agenda of politicians elected by we the Aryan people who just want our various countries back. Bankers can do their best to present us with puppets who will promise us whatever is needed to get elected, but implement the will of the bankers once in office. Converged corporations, institutions and the ever subversive academia provide back up for media lies, and perform a charade pretending that the false media reality is real.

But we pesky Americans, Aussies, Brits, Italians, Poles, Hungarians, we steadfastly refuse to vote according to their false reality, so the only solution is to rig elections as well.

Intriguingly, the groups tasked with stealing the election for Joseph Biden were so sure in the ability of the gaslighting media to alter reality that they did not even try to conceal what they were doing. We thus have a situation where Donald Trump, his team, his supporter base, and people who support the nationalist cause worldwide are playing a game of cat and mouse, constantly sharing ample proof of voter fraud while Big Tech social media takes it down as fast as it can, and the lying press labels it all as “baseless accusations” and “conspiracy theories”.

The current unknown is whether or not the Democrats have the courts covered. Given Trump will take his case to the US Supreme Court, we will in the coming month likely discover why the left in America melted down so dramatically over the death of Ruth Bader Ginsberg, or why they put up such a relatively weak fight to oppose the nomination of Amy Barrett.

The biggest red pill in all of this, even bigger than the mountain of evidence being compiled that he won the election, is the simple fact that Donald Trump has stood his ground.

He was supposed to have given up by now, to sob, “Yes, it’s all true, you’re right, I’m sorry.” We were all supposed to have been demoralised by now and retreated to the cheap plastic thrills offered to us by the modern world. Instead, Trump supporters have only intensified efforts to circulate proof that he is the real winner of the 2020 election.

Gaslighting becomes useless when its intended targets refuse to accept the altered version of reality and reject the influence of the abuser.

This is 2016 on steroids. It is the culmination of lie upon media lie being debunked at every turn. We cannot expect the fake news media to stop lying, but it is possible that media empires of lies will come crashing down in the wake of the result.