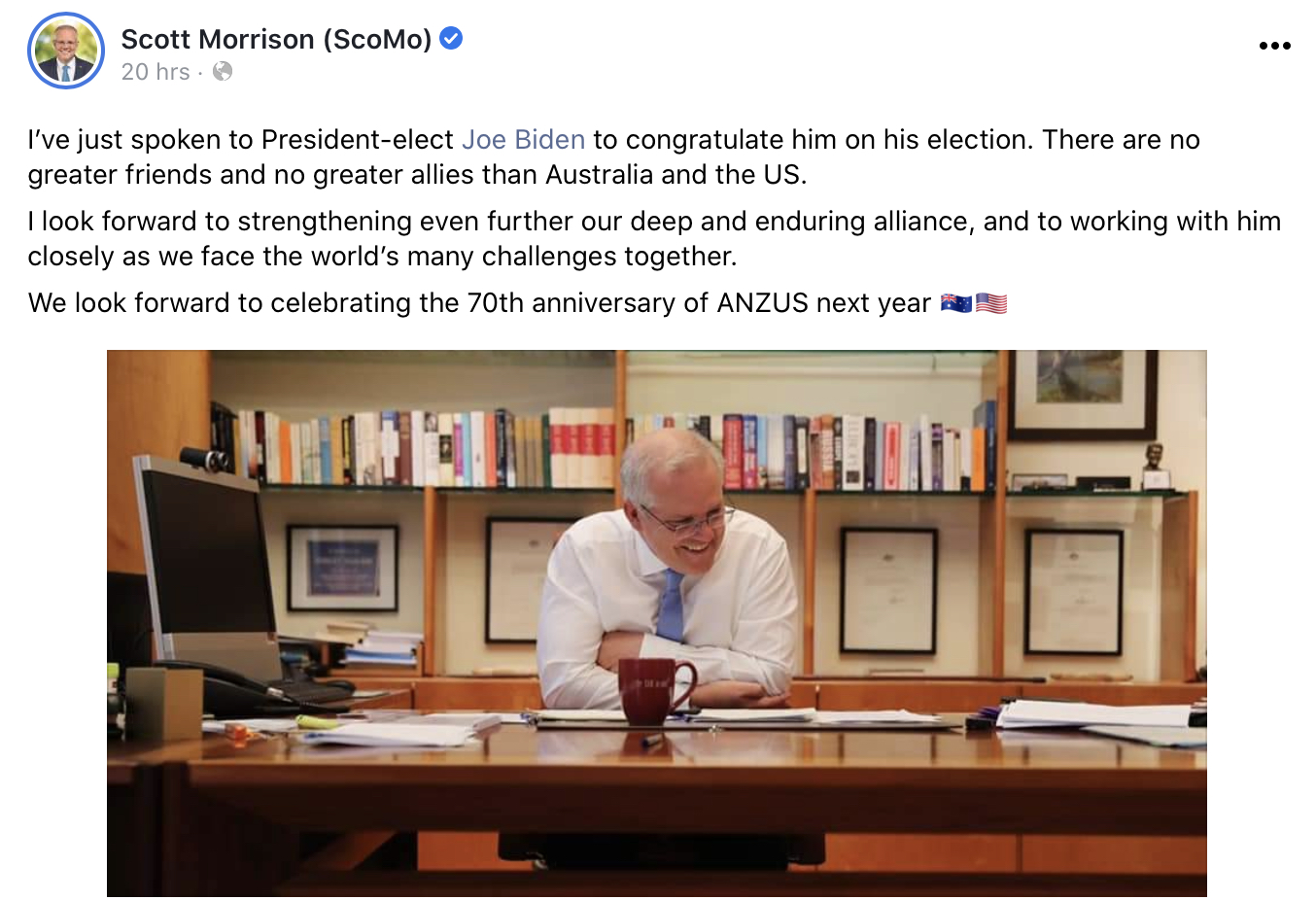 He’s an idiot. The media does not declare victory in a Presidential Election, the Electoral College does, and the result will likely be decided in the US Supreme Court. The Australian public has been quick to point this out. 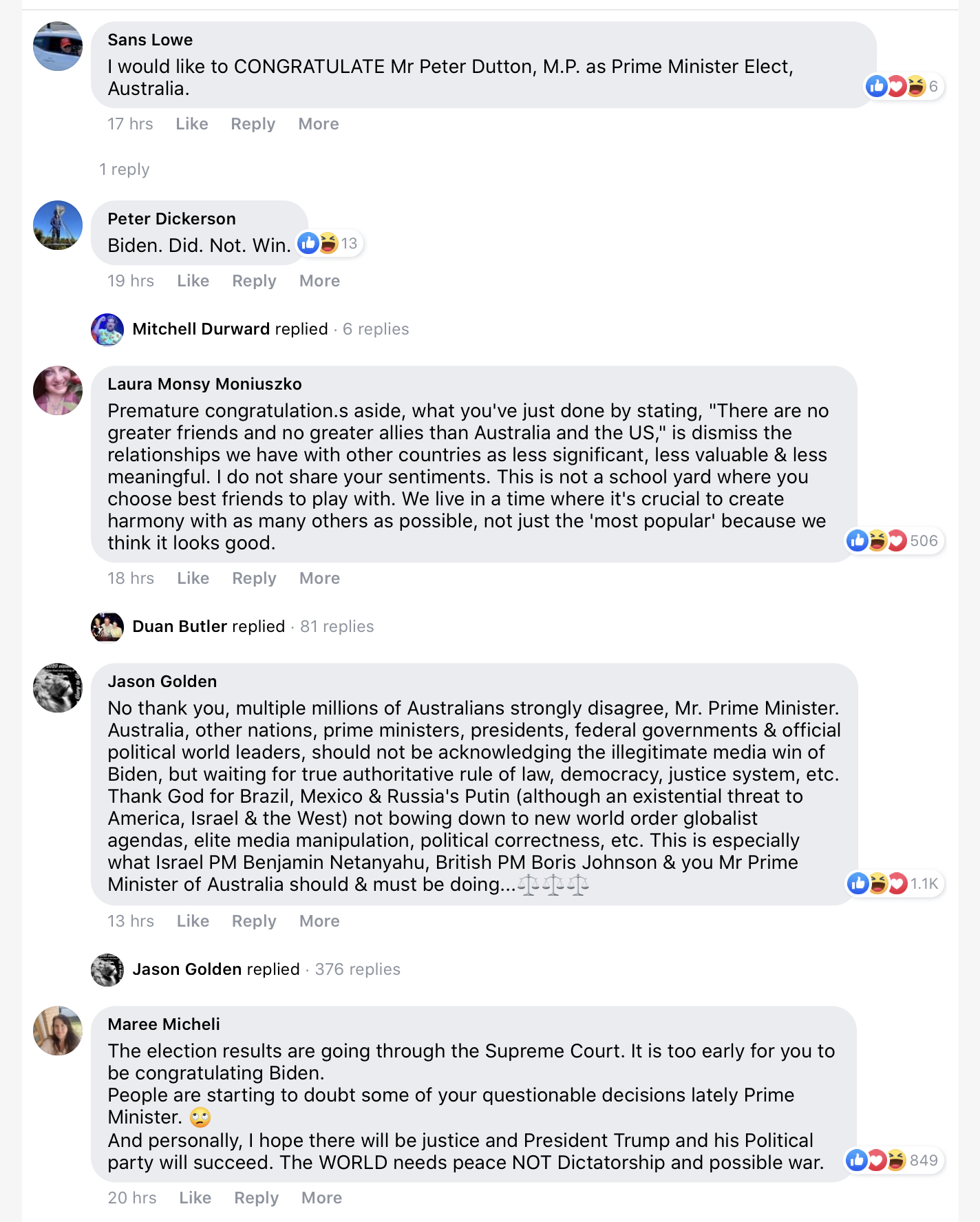 This screenshot is enough as these first five responses are representative of the rest of the comments. You can confirm this for yourself here.

Morrison’s getting destroyed, on a platform as pozzed as Facebook. Even the few shills in the thread who voice support for Morrison and Biden are getting wrecked.

Nobody believes that Joseph Biden has won this election. There are growing mountains of evidence of massive voter fraud, because the fraudsters were so confident of the media’s ability to cover up their crimes that they didn’t bother to hide what they were doing. 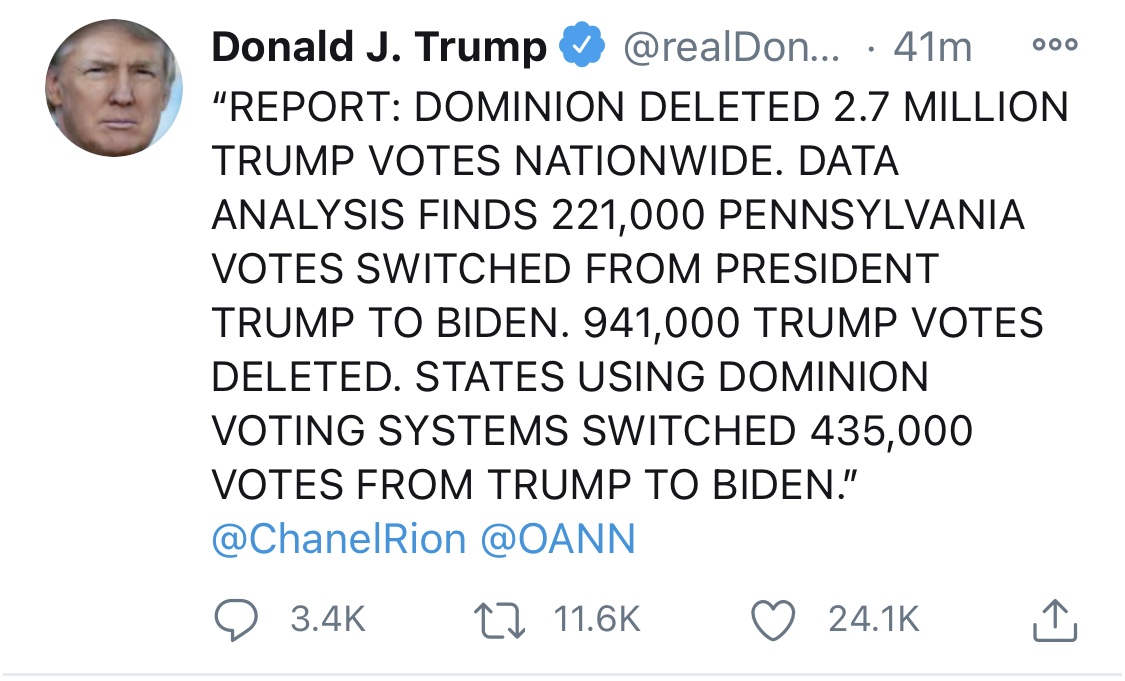 What I find intriguing is this unfinished list of leaders who have “congratulated” Biden on his “victory”:

Here is an incomplete list of those who have not:

I see four points of interest:

1. These contrasting lists can be used as a rough guide as to whom is on the take from the Great Reset globalist faction owned by Bill Gates, and those who are not. A notable absentee from the latter is Hungary’s leader Viktor Orban, who described Donald Trump as his “Plan A” but has still congratulated Biden. I wonder what they have on him?

2. Belorussian opposition leader Svetlana Tikhanovskaya has congratulated Biden while Lukashenko has not. Lukashenko refused a World Bank bribe to shut down Belorussia and its economy to ‘protect’ his country from coronavirus, and has wound up with a colour revolution on his hands.

3. Many of the leaders on the latter list are regularly decried for their so-called “anti-democratic” policies, as though this is supposed to be a bad thing. What is democracy today? Democracy is Liberalism, the foreign-planted ideology that insists that we must do everything we can to upend every idea, every moral good, every institution, anything that holds us together and connects us to our past. The endpoint of democracy is a dark, homogenised nothing. It is not so much the Autonomous Individual, but the Atomised Individual, defenceless against the tyranny of the state.

4. Some on the latter list have been friendly to Donal Trump and America, some have not. America’s opponents have the luxury of not having to toe the CNN line. They also understand that a rocky relationship with a clearly identified and robust opponent is far less dangerous than an ideology which says that we are all the same and must blend all of the countries and peoples of the world together to avoid future conflict.

Nationalism secures the existence of every people. Globalism is truly genocidal.