Karl Marx wanted a philosophy for all of life. Not an abstract philosophical splitting of straws, disconnected from reality, but a comprehensive system of thought. Don’t think of Marxism as an economic system alone – it’s a worldview, a whole way of thinking. It’s more than an idea, more than any fact. It’s a story about an eternal struggle, the cycles of history, and the oppressed rising up against those more powerful. It’s a story we can tell ourselves that explains the world and our place within it.

Therein lies much of its power, because human beings are all about stories.

Advertising targets this aspect of human nature. Did you know that advertising offers you a story to tell about yourself? Here’s one I’m sure you’ve heard before:

“Once upon a time there was a man who Dared to be Different. He drove his car boldly through wild wastelands and flooded rivers, and stood upon a high mountaintop, experiencing a sense of exultation in his conquest of the wilderness. Life in all its opportunity was spread before his feet.”

We’re meant to resonate with that story, and want to put ourselves inside it – by buying the car. It doesn’t make sense. We end up living in the city and driving shiny off-road vehicles to our office jobs. But we’re human beings and we don’t care about making sense. We’re all about feelings, and we’re all about stories. Those things make sense to us.

Stories are powerful – they shape the way we see the world. Stories operate at a level more immediate to us than truth or facts, because stories are our way of interpreting dry data and integrating it to our lives. The same facts and circumstances can appear in a very different light depending on the story you tell about them.

Marxism is a very satisfying narrative, a story about the brave resistance who band together in solidarity and compassion with all the oppressed, taking part in the great struggle of history. To be a Marxist is to put yourself inside that narrative and identify yourself with its heroes, while fighting its villains.

Ever wonder why they’re so blind to reality? They’re wrapped up in their story. To them, you’re not just a random, mild-mannered schoolteacher who happens to think immigration should serve the interests of the host country. You may not realise it, but you’ve been cast as the Racist, and the Nazi – characters in their story – while they themselves are cast as Indiana Jones. It doesn’t matter what they do when they’re fighting Nazis. And they don’t have to look outside the story to ask themselves what’s really going on, because they already know. The story makes sense of it all for them.

Laugh at them if you like. But you must understand that they’re human beings, and it comes with the territory. Perhaps it’s their way of finding purpose, and understanding existence. Animals might be content with food, water and sex, but we are self-aware, Pygmalion’s living statue, seeking to understand the world in which we’ve found ourselves.

“Man does not live by bread alone, but by every word that comes from the mouth of God,” said Jesus Christ, two thousand years ago. You can argue, if you like, about what exactly will fill the hunger we have in our souls for something more. Perhaps you don’t think it’s the words of God. But it’s easily demonstrable that our needs stretch beyond the material.

We need something to live for. Our culture tells us to live for happiness, and we reply “Great, but what exactly is that?” But it shrugs its shoulders and says “I give you prosperity, not philosophy.” It is materialistic, hedonistic, and postmodern.

Postmodernism hurts, because it’s the loss of a story. It hurts us to feel that we are random molecules, fragmented and alone in a meaningless universe. No meaning, no purpose, no point. That way lies nihilism, the ideology of suicide. The dark irony of our materialist culture is that while it’s great at supplying our material needs, it can’t do a thing about the inexplicable hunger in our souls. 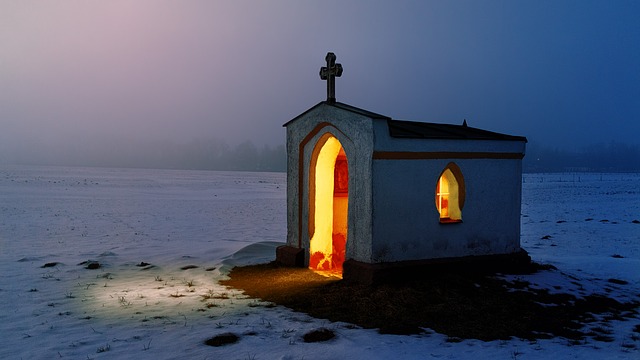 Christianity is also a story. Being a Christian ties you into the great narrative of creation and redemption that overarches the entire history of the world and stretches into eternity itself. At a guess, I’d say that radical Islam is also a story – one about brave freedom fighters that battle degeneracy and evil, and after dying a glorious martyr’s death, achieve paradise. There’s something to be said for a story that places you in the middle of a cosmic struggle between good and evil. It gives you a sense of purpose. Sometimes people die for their stories. Why not? Stories are more than life itself. Man does not live by bread alone. What is life if you have to live alone, in exile from your story?

Now in case an atheist was to say to me, “See how foolish religion is, and what atrocities it drives people to commit,” I would reply that atheists are not exempt. They too need a story, something to hang their lives on. Some take up the story of the great struggle between Religion and Progress. “Religion poisons everything!” they proclaim loudly – which is demonstrably false, although the phrase has a nice ring to it. You know when you hear it that they’ve found their story and cast their characters in it, heroes and villains alike. Atheists need a story as much as anyone else.

Not all stories are created equal. If you’re reading this, chances are you’re not keen on the story of the great struggle between the proletariat and the bourgeoisie, played out in our times by unkempt students with megaphones outside the state library. Chances are you think that story ill-founded and destructive. And I’d agree with you. But you must understand the name of the game. Because stories can trump facts, if you want to fight a destructive narrative, then you’ve got to build a convincing story of your own. Conservatives have been fixated on facts, logic and truth, and perhaps we’ve forgotten that we’re dealing with human nature. With our somewhat naïve faith in reason and the moral high ground, we’ve forgotten that it’s not just about what you say – the facts – but how you say it. A compelling narrative resonates in a way that pages of statistics really don’t.

I ask you, then, who are we? What is the world? What should we live for, and what is our role in these times? We have no choice but to accept one or other interpretation in answer to these questions. So choose wisely, and create well.

Last week I rewatched the musical Into the Woods (would definitely recommend). In the words of the witch, “Careful the tale you tell … that is the spell.”