In the event that I one day need to deal with a potential father-in-law, one of the ways in which I will probably make myself unpopular with him is to explain that I will not under any circumstances ask him for his daughter’s hand. Dating leads to marriage; what sort of man would allow his daughter to date a guy, fall for a guy, say yes to a guy and then, only then, figure out that said guy is actually unworthy of her? A man with a complete lack of courage, integrity and honor, that’s who.

If they are telling the truth, the Roy Moore accusers, like the Trump accusers before them, completely lack courage, integrity, and honor.

It’s not as though Moore has lived in the shadows and came out of nowhere to win the primary election. He has been an Alabama state judge, Alabama Supreme Court judge, and also Alabama Supreme Court judge (again). Although US judges are elected officials, he was fired from the Supreme Court twice for transparently refusing to implement federal court orders he didn’t approve of. In addition, he ran in two primaries for Alabama Governor. During the course of these election campaigns, including the state senator primary election, none of his political opponents figured out he was actually a kiddie fiddler who deserved cement boots and a free swimming lesson, and none of the women alleged to have been kiddie fiddled thought it was worth their while talking about it. However, when Judge Moore won the Republican primary by securing the endorsement of the Bannon-Breitbart machine, it was only then they suddenly remembered he had sexual contact with a 14-year-old four decades ago, so you might as well be elect Mohammed to the Senate as far as Jesus is concerned. 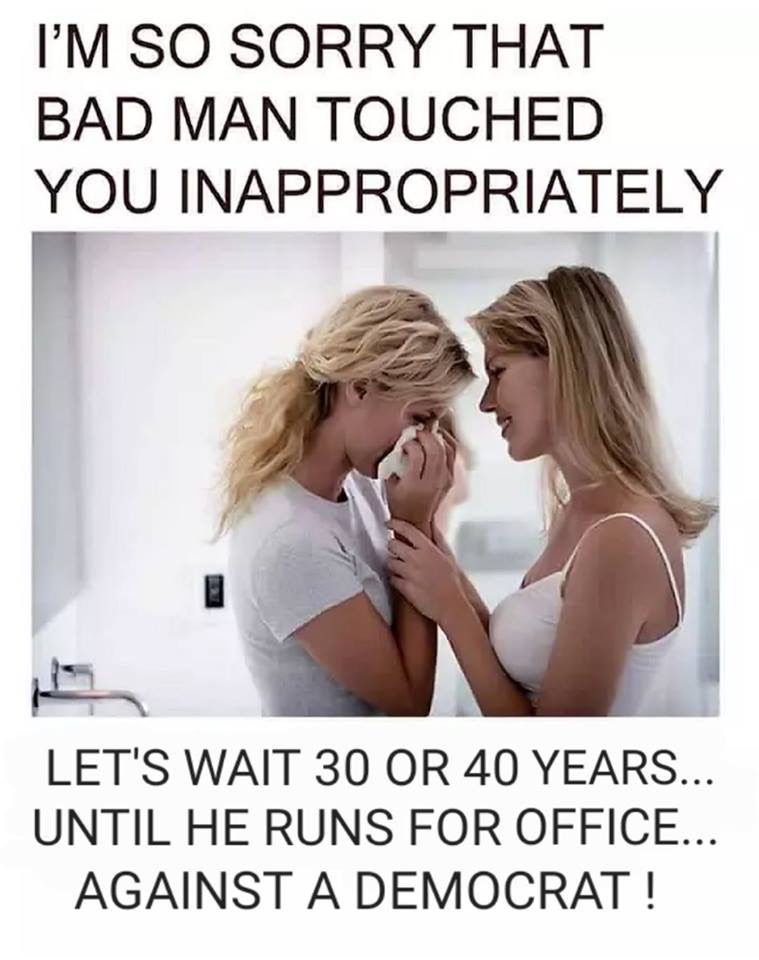 But you didn’t come here to learn what would have been the case if. You read your XYZ because you want the truth, which is that a prenatal infanticide advocate won a crucial election because the Washington Post 1 paid Leigh Corfman and Beverly Young Nelson to accuse the opposition candidate of non-lethal abuse of minors who were at the time fully capable of dialing 911. This generated so much outrage that voters engaged in totally-not-illegal interstate voting, resulting in the unheard-of feat of a midterm election turnout of 92% of the last presidential election. Perhaps the allegations contained many contradictions and maybe they did fabricate evidence, but voters who are informed enough to know that were never going to vote Democrat in the first place. They’ll just read the headlines and say this: 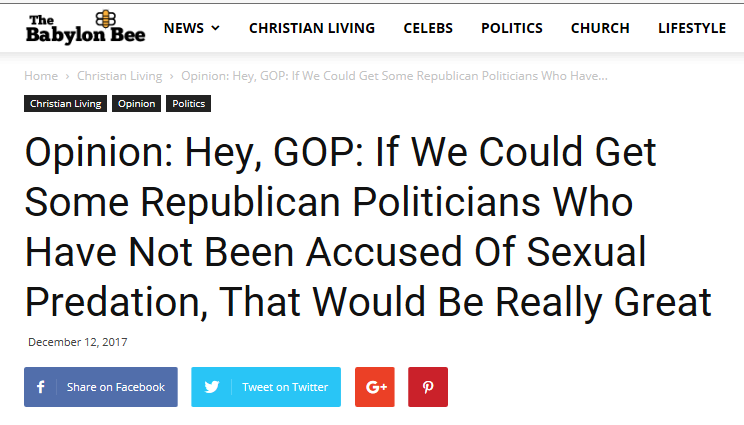 This political attack is an appeal to conservative integrity in general and Christian integrity in particular. The allegations against Moore were swiftly followed by a sudden change of heart from the mainstream media about how Christians should act. In the place where they previously asked why Christians can’t celebrate sexual perversion like normal people, now they started bashing Christians over not caring enough that their candidate was a sexual pervert. (Remember, this is the age of #MeToo; allegations must be reported as truth, or else you are a rape enabler.) Christianity Today also jumped in on the action, proclaiming that Christian Integrity™ was ‘severely tarnished’ by the whole schmozzle regardless of who won.

This attack works because voting for an alleged pedophile is contrary to Christian integrity. As Christianity Today so correctly points out (emphasis mine):

“When a public Christian is accused of some immorality, the honorable and moral thing to do has been to take a leave of absence until the matter of settled. This is precisely what Moore, who sees himself as a godly and moral candidate, has refused to do.”

Once upon a time this wasn’t such a bad thing, because another thing that is contrary to Christian integrity is slander. Once upon a time there was an unwritten agreement that these accusations were treated extremely seriously, by the accused and by accusers. That is simply no longer the case. The Democrat party is the party of Harvey Weinstein, Kevin Spacey, Al Franken, and others. They couldn’t possibly care less about Christian integrity, other than as a useful tool to manipulate voters who have it. The quislings at CT actually touched on this point, but then proceeded to argue that “turn the other cheek” somehow means that Moore should have stood aside even if the allegations were false, so that conservatives / evangelicals could collectively look virtuous on Twitter while civilization is razed to the ground 2.

The fundamental question conservatives have to address in the wake of all this is whether they actually care about conserving anything, or whether they just want to inflate their own ego by losing to prenatal infanticide advocates in the most honorable manner imaginable.

CT lays out the case for the former course of action (and by action, I really mean the exact opposite of that):

“Some have argued along these lines: We have the best chance in decades of reversing Roe v. Wade, protecting the religious liberty of the church, and reversing unjust and immoral laws! Let’s say for the sake of argument that such a political agenda could be enacted in the next few years by the means chosen — electing and supporting officials whose behavior is widely viewed as immoral. Will our political enemies be convinced of the righteousness of our moral agenda? Or will they think we are hypocrites who are using political power to force our wills on others? Will they more deeply respect us, or will they more deeply resent us and disbelieve our faith?”

These people are never going to respect you. They didn’t respect Jesus for doing good, and they aren’t going to respect you either. If you do anything good they will actually hate you and maybe even try to kill you for it. If they do respect you, it isn’t because they respect you, but because you are a useful idiot. As soon as you cease to be useful to them you will be lined up against a wall and shot.

This how evil works. Evil hates everything that is good in the world, and it cannot be bought, bullied, bargained or negotiated with, unless of course you are offering the destruction of something virtuous, noble and good. Evil cannot be virtue signaled into submission. The only way to win against evil is have nothing to do with it and to kill it. Do to it as it would do to you, but do it first 3.

If we are going to have any chance of doing anything good politically, then we need to seriously review the way we think about integrity. Traditional conservative politics is broken; we need to adapt to this new political reality.

But it starts with the realization that journalists are the lowest form of human life. It starts with telling them they have no integrity and have absolutely no right to question or comment on the integrity of anyone else. It starts with taking the fight to the fake news that caused this dilemma in the first place.

I’ll write about alternative integrity more when my thoughts on the topic are clearer. Please share any of your own thoughts in the comments section, which I will monitor closely.