In response to the chaos caused on Tuesday when feral leftists deliberately parked a car across train tracks to prevent a Flemington-bound train from taking passengers to the Melbourne Cup, Melbourne Metro are today deploying armed drones to clear tracks of any obstacles which may arise:

“In other train news …. Metro will be using drones around Melbourne’s train network today.

“That’s because Oaks Day is the “busiest day of the year” for Metro, given the combination of extra services for the races, combined with usual work day services.

“We already have a large number of CCTV cameras and deploy security teams to key locations, and we’re bolstering this using leading technology. On Oaks Day we will use remote piloted aircraft to provide a live video feed to our control centre and Victoria Police so we can quickly respond to any incidents,” a Metro statement read.

“On Melbourne Cup day a Flemington train was delayed when protesters parked a car across the tracks, blocking the train.”

Commentators have described the decisive action as ‘awesome.’ In the past, helicopters were used to dispel dirty hippies. In the current year, we use drones. 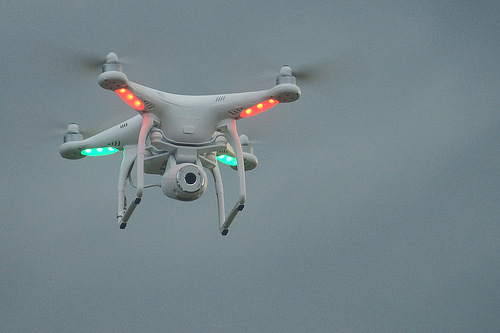 It is understood that the drones will operate above 15,000 feet to avoid ground fire and surface to air missiles, and they will employ the latest facial recognition software so as to avoid human error.  Spokespeople for Metro refuse to specify what kind of armaments said drones will utilise, other than to say they will be ‘tactical’ in nature.

The Nuking Risk Index (NRI) has subsequently downgraded Melbourne’s chances of getting wiped off the map from ‘critical’ to ‘very high’.

The Australian Greens initially expressed concern regarding sorties by the killer drones, but hastily walked back statements once it was revealed that Barack Obama and Hillary Clinton would be personally overseeing the operation. The Greens later released a statement on Twitter declaring that they abhor racism, sexism and bigotry of any kind.

A short fat man claiming to be the Victorian Premier informed The XYZ that when he visited command HQ he felt welcomed the moment he stepped into the office, and that they have some very proactive HR and anti-bullying processes in place which he was sure would lead to beneficial outcomes.