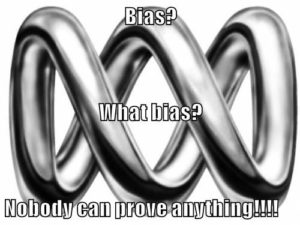 Feathers are ruffled over at the ABC. Managing Director, Michele Guthrie is demanding an apology from the online Editor at Quadrant, Roger Franklin, for an article he wrote concerning the terrorist attack in Manchester on children and their carers attending a concert. Franklin expressed his frustration over the Q&A program the night before Manchester became the latest city in Europe to suffer at the hands of yet another extremist follower of Islam, who emerged from the apparently unknowing Islamic community, to slaughter the innocent.

American Physicist Lawrence Krauss appeared on Q&A as part of the panel, and he expressed some patently vapid views on terrorism, including that Americans are more likely to killed by a falling refrigerator. Krauss was given the insiders run by host Tony Jones, as he expressed a set of views that seem well outside any area of expertise that he might legitimately claim, but those are matters of no moment, when the views are of the kind acceptable to the ABC mindset and deny or diminish the existence or the magnitude of the threat posed by Islamic inspired terrorism, or any policy change that seeks to address it.

Franklin wrote something that I suspect many people feel, which is that there would be a sense of justice if attacks of this kind fell upon those who spend so much time denying the existence or threat posed by Islamic-inspired terrorism and ridiculing and insulting anyone who sees the issue in terms different, rather than upon innocent children; which was apparently too much for Ms Guthrie, who wrote saying that the article is ‘vicious and offensive’, and demanded that the article be taken down and an apology issued.

To say that Ms Guthrie has over-reacted is putting the case rather mildly. No rational person who reads Franklin’s piece would conclude that he was calling for an actual terrorist attack on the ABC, and if the risk really is of the magnitude assessed by Mr Krauss, undoubtedly at the expense of the Australian taxpayer, it is hard to see why the fuss is necessary. However it is one of those cases where Ms Guthrie’s actions speak louder than her protestations, for she instantly reached for the taxpayers’ cheque book and employed consultants to assess the security implications of the Franklin’s ‘inflammatory words’, and apparently spent some hours reassuring worried staff.

It must be nice to have an endless supply of taxpayers’ money to ensure personal safety and security, but those of us who are not so favourably placed rightly look at the growing body count in Europe and America and conclude that Islamic-inspired terrorism is a real threat, and that some security and policy changes are necessary to deal with it. Not that such a view would ever find its way to the air on the ABC, which is a regular platform for those who defend Islam, and pretend or deny that a relatively mainstream interpretation of its teachings apparently inspires certain of it followers to kill the unbeliever in as large a number as circumstances permit.

The ABC regularly shows a kind of indifference to terrorist attacks, by filtering from its reporting of terrorism events words like ‘Islam’ and ‘Muslim’ and calling onto the air so called experts to tell us that what we can plainly see is not what is actually happening. Who could forget the ABC coverage of the Martin Place siege, when the perpetrator called for an Islamic State flag, and held a gun to hostages to make them hold Islamic signs in the windows, as the ABC talking heads piously lectured the audience that the motivation was a mystery and that ludicrously asserted that it wasn’t a terrorist event. Today, the NSW Coroner has disagreed, although there is no chance that such a finding will cause the ABC to acknowledge its failings.

Franklin is not alone in feeling immense frustration at the ABC and its coverage of Islamic terrorism; and the rhetorical device that he employed eloquently makes the point that the only circumstances in which the ABC might grudgingly acknowledge there is a problem with Islamic-inspired terrorism is if the ABC is itself physically targeted. But they really don’t need to worry, much better to expend taxpayers’ resource watching for falling Kelvinators.