The Regressive Left (who largely valued #nevertrump hashtags over actually registering to vote Democrat to achieve their desired #nevertrump result) continue to reel over the fact that their apathy for democracy made them complicit in the rollout of the the most exciting populist movement in recent history. The Regressive Left have predictably sought comfort in hollow meaningless gestures that they always claim are about highlighting the plight of the marginalised flavour of the month, but in reality make it abundantly clear to the rest of us that it’s all about highlighting their own virtue and a level of tolerance that is well beyond the attainable levels of most mere mortals. 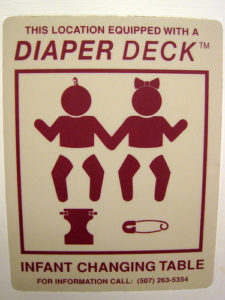 The latest of these hollow self-aggrandising gestures is wearing a safety pin. Apparently to show solidarity with anyone who feels betrayed and let down by ‘all of the white people’ and their outrageous act of voting out of self-preservation for once while they still have the opportunity, instead of in the interest of those who will eventually form a voting block so big and powerful that it will ensure that ‘all of the White people’ can never have a say in how their own country is run ever again. The safety pin first appeared after Brexit. A welcome distraction from the awkward fact that angry older conservatives turned out to vote in greater numbers than angry slacker millennials who stayed at home and hash tagged. They’ve just trotted it out again for the #nevertrump crowd.

The safety pin is the perfect symbol for the regressive left. Firstly, it’s easy and doesn’t require any real effort or outlay. They could’ve gone with, say… the Bleeding Heart flower pinned to their lapel. The Bleeding Heart flower is a deep pink at the centre, like a heart. The colour pours onto the crisp white petals. It symbolises wearing one’s heart on their sleeve, and pouring it out for all to see. But finding a florist, and one that sells Bleeding Hearts is just all too much effort. Kind of like voting in the most important election ever, which 90 million Americans (and presumably tens of millions of Clinton supporters) found equally bothersome. So the safety pin is an ideal option for lazy, low energy virtue signallers. You can probably even find one around the house.

The safety pin is also symbolic of desperately trying to hold something together that is torn, broken, or incompatible. Regressive left ideology is something that we’d all agree needs to be held together with safety pins to prevent the whole thing from falling apart under even the most superficial scrutiny. Feminism is awkwardly and uncomfortably pinned to Islamism. Climate alarmism is inharmoniously pinned to concerns for the welfare of those in the third world. Faux concern for blue-collar casualties of the loss of traditional industry is inexplicably hitched to globalist ideals. The safety pin is symbolic of trying to connect completely disparate and completely incompatible ideologies in a way that is anything but seamless, and desperately trying to hold such flawed ideology together when subjected to the free market of ideas.

Finally, we have the inescapable symbolism of safety pins and diapers. It makes us think of immaturity, tantrums, weakness, dependency, emotionally and intellectually undeveloped… the analogies are limitless. One has to suspect that subconsciously at least, the safety pin is not a sign of solidarity between Cultural Marxists and those they perceive as marginalised. It is an unspoken acknowledgement of a completely and utterly failed ideology that was only held in place over the fabric of reality by an ever weakening safety pin that was bent and twisted forever out of shape by a very clever candidate, and a media that well and truly overplayed their hand last week.