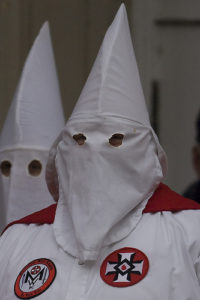 There is a new breed of white supremacist making themselves apparent within our Western democracies.

Unlike the white supremacists of the past, such as the KKK, these modern day supremacists do not believe their supremacy is brought about based on their skin colour or race, but upon the belief that their moral code of ethics, belief and thought, stand superior to all else that challenges or opposes that moral code.

While the white supremacists of yesteryear have been ostracised to the very fringes of our society and denounced by the mainstream time and time again, this new wave of those waving the flag of supremacy find support from mainstream media outlets, our nation’s universities and in many cases, the very Parliaments of our Western nations.

Once upon a time the supremacist would find grievance with anybody who possessed a different skin tone that crossed their path.

However, the white moral supremacist of today cares little for skin tone and instead finds grievance with anybody who crosses their path that dares to express a different idea, opinion or point of view to that which is accepted within the new supremacist’s global doctrine.

They become inflamed easily when challenged on their beliefs, usually resorting to insulting language or even violence toward those they believe are inferior.

The supremacist bullies harass and attempt to humiliate all those they see as inferior, and feel justified in their behaviour and actions due to the mis-guided belief that they themselves are superior beings of thought, intelligence and understanding, simply due to the doctrine that they choose to follow.

The white moral supremacist will on one hand, preach a high code of moral ethical behaviour, as per their accepted doctrine but then on the other hand, forgo such ethical standards of behaviour whilst carrying out their attacks upon individuals whom they perceive as morally inferior, in much the same way as the white supremacists of the past would preach the doctrine of the Bible but forgo such doctrine when lynching those of coloured origin.

Our Nation’s media not only condones such white moral supremacy but supports and promotes it at the detriment of free thought and debate.

Our Nation’s Parliaments and houses of Government legislate to support white moral supremacist ideas, in many cases against the wishes of their citizens, and due to the fear that if they don’t support the doctrines of the moral supremacists, they themselves will become victims of the supremacists’ vitriol.

Men, women, children, homosexuals, whites, blacks, those of ethnic or Asian origins, no one is safe from these moral supremacists if they dare challenge them or their doctrine, and although the moral supremacists say they stand against racism, sexism, bigotry and for many other causes, the behaviour and actions of the supremacists are more often than not, far more extreme and socially detrimental than anything said by those they act against.

Furthermore, on close examination of their global doctrine, it is in many cases, racist, bigoted and sexiest to levels of hypocrisy that even the KKK would be ashamed of.

Maximillian is just one of seven billion.
Twitter: @maximillian_77