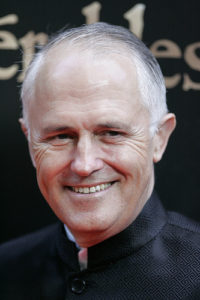 As the coup last September unfolded I was sitting at home with my wife listening to the updates on the radio. As it became clear that Turnbull would be our next Prime Minister, I pulled out my phone and started checking the usual political websites to see how people were reacting.

Of course the leftists were joyous, the man that many had been taught to hate since university, if not even earlier, had been thrown out by his own party. Their gloating, some of it patently absurd, was understandable and expected.

After all, these are people who uniformly believe that open borders are a wonderful idea with no negative consequences, that everyone who claims to be a refugee magically lost their documents, and that Islam is a religion of peace.

So I wasn’t expecting genius when I stopped by their sites or social media accounts.

What shocked me more was the supposed “right-wingers” who were also cheering.

The idea that a right-of-centre citizen might glumly see the elevation of a leftist media darling to the Prime Ministerial chair as a necessary lesser evil to ward off the return to power of the organised crime group masquerading as a political party that is the ALP, was something that although I disagreed with, I could understand.

The idea that Malcolm was some kind of saviour who would discard the clumsy club of social conservatism and take up the shining rapier of classical liberalism to get the budget back in the black and restore free speech unshackled from the mire of Abbottism was ridiculous.

I remember who these fantasists were, and so should everyone on the right.

The fifty-four traitorous offenders in the parliamentary Liberal Party are well known; many of them are now thankfully gone and will not be missed.

The main offenders in the media are also well known. Some of them, like the normally-sound Miranda Devine, were playing the usual political journalists’ game of supporting a faction for scraps under the table. Sadly she got it wrong, but not before amusingly naming the vast majority of right of centre Australians as “delusional”.

That the vile, nepotistic shrew Nikki Savva (traditionally seen playing the token “right-winger” on the ABC), hilariously believed herself to still have any relevance at all, let alone enough to help her husband’s boss, is a sad joke and a sadder reflection of the calibre of journalism today.

But the big shock was the reaction of one man I used to admire: Professor Sinclair Davidson, Professor of Institutional Economics in the School of Economics, Finance and Marketing at RMIT University, a Senior Research Fellow at the Institute of Public Affairs, a very lonely sane voice at the taxpayer funded leftist sheltered workshop that is The Conversation and the Doomlord of the highly popular and often entertaining libertarian blog Catallaxy Files.

His cheerleading, and that of a select few others from the world of think-tanks and universities, was downright mystifying. They held Abbott responsible for every failure of the still-infant Liberal government, while absolving the man who had done so much to undermine that same government from fault or blame.

Many people on the libertarian right, not least many associated with the prestigious Institute of Public Affairs, were very unhappy with the performance of the Abbott government, particularly on the vital issues of free speech and the ballooning government debt.

Abbott had come to government promising to overturn or at the very least alter the grotesque and vile statutes that limit freedom of expression in Australia, and had backed down in disgrace at the first attempt.

A few phone calls to wavering MPs from minority cultural and religious interest groups, and a concerted effort from the elitist left of the parliamentary Liberal party desperate not to be called “racist” at dinner parties, was enough to scuttle one of the issues most dear to conservatives, libertarians and everyone else on the right across Australia.

It was bitterly disappointing, but I was puzzled by the certainty held by many libertarians, as well as others with close connections to the Institute of Public Affairs or Liberal party politicians, that the man who embodies the worst of the establishment left-wing of the Liberal party would somehow fight harder for free speech than Abbott did.

Turnbull, after all, was almost certainly at the forefront of the opposition to proposed changes to the Racial Discrimination Act; why would he show a commitment to free speech when he has clearly been a member of the ideological left for his entire life?

Well, it turns out there may have been a reason the rest of us weren’t privy to:

Turnbull had committed to making changes to the controversial section 18C of the Racial Discrimination Act to persuade pro free-speech MPs in his quest for the leadership last year, it has been revealed.

The Daily Telegraph has confirmed that a number of MPs had been given assurances that Mr Turnbull as Prime Minister would revisit the issue of 18C, after it was jettisoned by Tony Abbott when it became clear it would be blocked in the Senate.

Two MPs, who refused to be named, said it was clear to them the commitment was made as part of the campaign to take the leadership last September, that he would look at changing the law rather than the Abbott plan to repeal it entirely.

“There was a deliberate impression left that he would put it back on the table,” one senior Liberal source said.

Another said intermediaries had assured several MPs Mr Turnbull would commit to changing it as PM.

On becoming Prime Minister, the issue fell off the government’s agenda.

I don’t doubt that before the leadership spill Turnbull was spinning all sorts of fantasies out of whole cloth.

Why those who should have known better believed him is a more pertinent question. As for the fantasy of getting some budget repair done:

“Australia’s debt could blow out by more than $100 billion if the budget is wrong in its prediction that the economy will return to pre-crisis growth and the Turnbull government is unable to win Senate support for all of its outstanding savings measures.”

I want to believe that the few prominent libertarians and classical liberals who initially supported Turnbull as the saviour of Free Speech and the enemy of red ink truly believed that his love affair with the media would allow him to get more done that Abbott, who remains a hate figure for not only most journalists but even most journalism students.

But the more realistic part of me suspects that academics and mainstream journalists just don’t make very good right-wingers. They sit inside an establishment that holds certain leftist worldviews to be inviolable, and then congratulate themselves and each other for giving the leftists’ noses a tweak without ever stepping far outside the leftist norm.

Ultimately, there is very little to differentiate those nominally on the right who cheered the rise of Lord Malcolm from the left at all.

“The creatures outside looked from pig to man, and from man to pig, and from pig
to man again; but already it was impossible to say which was which.”

Who else but a leftist, after all, would believe a politician? Let alone a leftist one?