Rio seems to be a third world s—hole masquerading as a hub of cultural enrichment. There, I said it. I never felt particularly inclined to visit, at least not since I stopped being young and foolish. The tale related to me by a friend of being robbed at gunpoint right in the shadow of Christ the Redeemer put a real dampener on the place for me. You don’t tend to get held up at gunpoint right in front of the Statue of Liberty, Buckingham Palace, or Uluru for that matter. 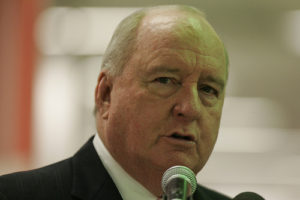 So I nearly choked on my coffee when I heard Alan Jones on the radio the other day running down an Australian Olympic official for imposing a curfew on our athletes due to security concerns. This from the man who would be falling over himself to cast the first stone if lax security attitudes resulted in a terror attack on our Olympic team. Jones in his old age is exhibiting many of the same chronic symptoms as your garden variety social justice warrior, and no doubt perplexes many of his listeners on occasion.

Like Malcolm Fraser, he has reaped the financial benefits of a career in staunch conservatism, yet in his old age seems to inexplicably want to make amends to the progressive gods by occasionally buying into their nonsense and kicking out the ladder that he has already ascended, in search of some form of approval by a section of society that, frankly, nobody should be enabling or seeking approval from.

Jones regaled us on how wonderful and friendly the people of Rio are, of the welcoming party atmosphere of the city. Of how safe he felt everywhere he went. How this particular Olympic official was being an alarmist, a negative Nancy, a killjoy. Of course Jones felt safe everywhere he went. He isn’t exactly slumming it over there. The guy has a net worth of millions. When he samples local delicacies like Brazilian Barbecue, of course it’s going to be real beef in a Michelin Star restaurant in a good area, not meat of unknown origin from an unscrupulous street vendor.

His whole diatribe against common sense, and gushing praise of the local culture sounded suspiciously like the usual politically correct Cultural Marxist claptrap. We’ve heard all of the same arguments before. “The Lebanese guy that runs the local kebab shop is lovely, so the Skaf brothers can’t possibly be the ones responsible for all these rapes”. It’s an argument of completely unrelated factors to try and justify a stance, and it sounds just as ridiculous coming from the lips of an elderly, out of touch cuckservative as it does coming from the mouths of triggered millennial snowflakes.

Had he taken a more realistic stance and said something to the effect of, “Hey, there’s some shady areas and shady people, but you have to let young Olympians full of beans make their own mistakes,” it would be a reasonable point. But paying lip service to cultural relativism and other regressive left themes was never going to be becoming of him, or do his credibility with a largely conservative audience any favours.

The slandered Australian Olympic official was vindicated days later when several of our Olympians broke curfew, and surprise surprise, were forced to withdraw a thousand dollars from an ATM at gunpoint. The lack of a large Alan-Jones-sized entourage and ability to attain entry into a more exclusive area where this may not have occurred will no doubt have contributed to these rule-breaking Olympians leaving Rio traumatised, and a thousand dollars lighter.

Will Alan Jones concede that his dressing-down of an Australian Olympic official concerned about the welfare of our team was extremely naive, unwarranted, and ultimately irresponsible? Unlikely. Alan Jones is wrong about a variety of things on a regular basis. His fact checking seems unrivalled by anyone with the exception of Q&A. And like the cult of Tony Jones, you’ll never see anything remotely resembling a retraction or an apology.

This is yet another sign that Jones really has seen his day in terms of relevance to a conservative audience in 2016. Baby boomers and the elderly seem genuinely confused, not only by his occasional (though increasingly frequent) dalliances into social justice themes, and his ABC-like insistence on forcing the elitist arts (ballet/opera etc.) onto the great unwashed in an attempt to make them appreciate ‘culture’ whether they like it or not. These days it almost seems that he’s angling for John Faine’s gig most of the time.

Younger centrists, conservatives, and libertarians just don’t find him genuine enough in any way, shape, or form. Incoming senator Derryn Hinch recently described Alan Jones as a “vicious nasty old queen”. A bit mean-spirited on Hinch’s part of course, but we get what he was saying. Younger centrists, conservatives, and libertarians are just fine with vicious nasty queens. Milo Yianoppolous has made a career out of it and is immensely popular.

I think what Hinch was getting at is that here is that a commentator whose trade is supposed to be about openness and transparency shouldn’t have any skeletons in the closet if he’s going to be throwing so many stones. So should 2GB and Jones’ colleagues. It was a bit rich of Ray Hadley to be calling for the head of Todd Carney a while back for committing a lewd act in a men’s room, when his highly-paid 2GB stablemate never lost his job or suffered any damage to his career despite being ARRESTED over lewd behaviour in a men’s room in London in 1988. Carney was a young dumb football player. They do this stuff. Jones was in his late forties, and should have known better.

The most common criticism of Jones I hear from people who listen to him, is that he conspicuously shies away from reporting on certain outrageous injustices, or if he reports upon them at all it is only in passing. The implication being that they hit a little close to home in regard to personal allegations that are all over the Internet. Innocent until proven guilty, of course, but if there was any basis whatsoever, it would make whatever Jones is outraged about on a particular day rather insignificant by comparison.

The moral of the story is that Jones is slowly making himself largely irrelevant and obsolete in much the same way as #NEVERTRUMPERS like Glenn Beck and other U.S. conservative commentators who failed to adapt to the changing sensibilities of their listenership. He has suffered the same pitfall as the Liberals. In much the same way as they have become diluted and largely indistinguishable from Labor, Jones has drifted away from his potential audience as they drift toward podcasters who more closely reflect their values. In a digital world, the likes of Alan Jones and Glenn Beck have been left behind because they’re still using dial-up when everyone else is streaming live and in the moment.