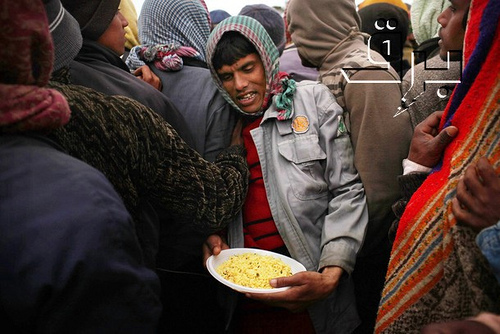 Here is a Thought for the Day:

In an overly sensitive world, with links drawn between various causes and effects, very often by a cottage industry of progressive academics and activists, I recently had time to reflect on a glaring omission.

Why are people seeking refuge and asylum? Have we studied this seriously? Sometimes we hear arguments that foreign aid is more cost-effective at maintaining security than military spending. Why?

Here is my attempt at an Al Gore Inconvenient Truth:

A high proportion of contempary migration is people fleeing from socialism or Islamism.

Those who flee socialism can only break the cycle by rising up in a capitalist economy and empowering themselves through education, hard work and personal discipline. Falling onto welfare in inner city ghettos, in a country which enacts socialist policies that hinder industry and starve opportunity and wealth creation, will not provide the refugee with safety. Very soon, they will be fleeing again as they find their circumstances recreated. Simply put – socialist welfare dependency is not a cure for socialist welfare dependency.

For those fleeing Islamism, it is astounding that no one from the left has stopped to consider if Islamic culture and society is what Muslims are routinely fleeing. I suspect that to propose such a thing makes one non-left. However, entertain this notion for a few moments. Imagine if, when seeking asylum, one was to shed their religious allegiance, like a German in 1945 shedding their NAZI horrors and just being a German.

In such a world, these refugees would be given a real chance for safety – seeking asylum and refuge from Islamic culture and society.

As it stands, we must not question if the refugees are importing with them the very oppression from which they flee. As we grow accustomed to terror, to submission to Halal and other Islamic social and cultural practices, it is an Inconvenient Truth to point out that there is a strong correlation between Islamic migration and domestic terror. Between practicing Islam in a host country and substandard outcomes compared to peer migrants.

The Inconvenient Truth is this: We are essentially running a battered wife’s shelter, where we deliberately house the battered wife and the abusive husband together forever. We turn a blind eye to the battering in our shelter. We call anyone who points out this battering a bigot. We perversely say that if you are battered, then you and your abuser are welcome – all the while insisting that battery simply does not happen in our society.

In such a situation, it would be madness to not separate the abuser and the abused. In the Islamic refugee crisis, we call it Islamophobic to think of such a thing.

Why can those who jump to ever more spurious offence at trigger warnings, micro aggression or even the use of the word “guys” not get it? Why is there such a selective myopia? Where is the critical debate? Why do we not discuss this openly in the mass media and show the merit or complete lack of merit of key topics.

If these concerns are true, where will there be safety from Islam in the near future – for both Muslims and Westerners?

Public institutions like the ABC have a charter and mandate to inform the public. Propaganda seeks to influence. We have too little of the former and too much of the latter at such a critical moment in history. It should be a scandal.