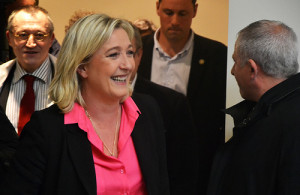 Marine Le Pen, whose political party, the National Front, just became the biggest political force in France, is representative of the interests and the opinions of the people, but the media and socialists oppose her politics. Ditto, very weirdly, US Republican front runner, Donald Trump.

Are we entering an era where the media, the Merkels, the bizarre social re-engineering projects, are so bad that despite the socialists controlling the media the people see through the sh!t?

The era of peak dissonance is over. Cultural Libertarianism is gaining the upper hand.

Many commentators appear to believe that Trump’s call to restrict Muslim immigration until appropriate controls can be put in place will alienate him from the electorate. But the point is, Trump’s message is supported by a vast number of Americans. As is Le Pen’s by the French. As is Farage by the British, and Wilders by the Dutch.

I think the socialists are losing the plot in spite of controlling the media.