Europe is setting new records. Just not the right type. If only they could create this many jobs.

“A monthly record of 218,394 migrants and refugees reached Europe by sea in October, the UN says, almost as many as the total number of arrivals in 2014.”

Speaking of which… what will all these people do? And the large families they will soon be reunitied with? 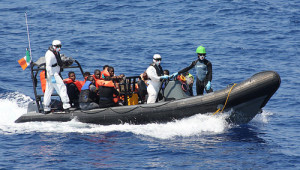 The Germans peddle half truths that there will be 800,000 migrants arriving this year – This is 218,000 to Europe (by sea alone) in one month. That tap is turned on and picking up in volume each month, even though the weather should slow the traffic. Thats 218,000 last month alone plus the land based migrants plus, for those who are successful (minus those who are deported) a multiplier effect of their families. Deary me.

In September, the EU came to an agreement on the settlement of 100,000 migrants, but even then that was a couple of week’s supply.

One last thought.  Also in September, The XYZ suggested that the tendency to portray as racist the idea that Europeans have a right to identify themselves ethnically as European, or to take any action which might stem the flow of refugees, risked a situation where the Europeans were being “Godwin’s Lawed out of existence.”  Consider this, then have a look at the last line in the BBC article.

“Mrs Merkel’s CDU party backs the idea, (transit zones to be set up to process arrivals near the country’s borders,) however Social Democrat leader Sigmar Gabriel is opposed to the zones amid concerns that they might resemble detention camps.”

And because it worked in Australia, saving lives and helping Australia raise its official migrant and refugee intake. Twice.