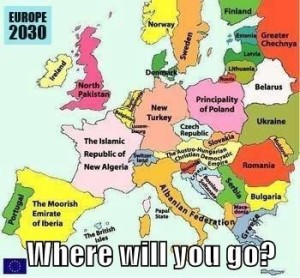 The world now knows what has unfolded in Paris in the last 24 hours. Here are five things we have learned so far.

The French authorities were already on high alert, having foiled several terrorist plots since the January Charlie Hebdo shooting. Their task has been made so much harder by the Wiki leaks affair, that exposed the methods being used to combat terrorism and enabled those seeking to murder civilians to evade detection. Consequently, the authorities were taken by surprise by these highly coordinated and well planned attacks. We trust the people at Wiki leaks and the likes of Edward Snowdon are proud of themselves.

The vacuous slogan “religion of peace” is exposed once again as lie and a fraud. Islam is not a religion of peace. It never has been and never will be. For more than century it has been an open question as to whether Islam can live peaceably in the west. It cannot. Unlike Christianity, Islam is without Reformation. It continues in the dark ages, untouched by the Age of Reason. To pretend otherwise is to indulge in a delusion the west can no longer afford.

The lunacy of uncontrolled and uncritical immigration from Islamic countries is exposed. This is where it leads – to the scenes of carnage and bloodshed pouring in from Paris right now. Those deluded crowds who cheered the arrival of thousands of mainly young men from Islamic countries into European cities in recent weeks were welcoming, with acclamation, the invasion of their own nations. The democracies of western Europe are committing progressive, corporate suicide, before our very eyes.

The denial of the appeasers and apologists is beyond delusional – it is downright dangerous. Even as fanatics were carrying out their bloody business, and even as Islamic State gleefully claimed credit, President Obama was on television clueless as to who might be responsible. The 9/11 attacks, the Madrid train bombing, the murder of children in Beslan, the Bali bombing, we could go on and on and on… none of these provide a clue Mr President? It is more than unfortunate that a weakling occupies the White House at this moment in history. The world is looking, increasingly, to a strong leader, like Mr Putin. The grim reality is, the way you stop the terrorists killing you is by killing the terrorists. It’s time the collaborators fell silent and the realists were heard.

Finally, those who the so-called “progressive” left continually shout down as “racists” are being proved right – again. The concept of cultural relativity is an insanity perpetuated by educated people in denial. It is not racist to assert that one culture, one political system, one religion, and one way of life, is superior to another. It’s just stating the obvious. It is a fact that liberal western democracy, that Christianity, and the way of life ushered by the European Enlightenment, is superior, far superior, to that of an unenlightened medieval death cult.