In a stunning development, North Korea has unilaterally declared war on ISIS, vowing to smash the Islamic State in a “glorious battle to save humanity from the scourge of violent extremism.”

According to one analyst of world affairs, “North Korea is a peaceful country, which hasn’t invaded anyone for over half a century. It has been invited in by the legitimate rulers of the region, who are unable to deal with the crisis posed by Daesh alone, therefore, this is legitimate military action made on behalf of the international community.” 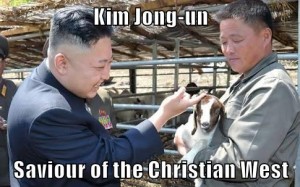 In one of the most dramatic developments, North Korea has reportedly moved its nuclear arsenal closer to its borders, and advised all non-essential personnel to leave the Middle East, in a sign that North Korea may be preparing to nuke ISIL!

The potential for nuclear war against the Death Cult has sent Western social media into rapture. Not to be outdone by other rival leaders shooting to hero-status via charisma & great marketing, Kim Jong-un has quickly surpassed other beloved dictators in the popularity stakes. Memes featuring the Dear Leader being adored by cute animals, and pronouncing him “Saviour of the Christian West,” have gone viral.

North Korean state television has proclaimed in its latest report that IS is nearly completely destroyed. In response, Islamic State militants have posted videos to Youtube declaring that they will “wipe the People’s Democratic Republic of Korea off the face of the planet in a glorious battle to save humanity from Communism.”

News that ISIS is preparing to annihilate the totalitarian dictatorship has sent Western social media into rapture, with Facebook users rushing to show their support for the pious organisa….wait…hang on….