Over the last few days, thousands have gathered in cities around the world, standing in defiance of Friday’s terrorist attack in France. The French people and those around the world have shown that they will not be cowered by these attacks.

“We are not afraid” has become the catch-cry of the French people as well as supporters of freedom and liberty around the world.

Immediately following the attack, French press responded with their own statement of defiance:

The French Ambassador to Australia said after the attack that it “will be a merciless response. [from France] That will be the first stage.”

Following the Islamic State’s claim of responsibility for the Paris attacks, France launched massive airstrikes on ISIS stronghold of Raqqa in Syria, an attack which has already significantly degraded IS. This is only the beginning of France’s response in the wake of the terrorist attacks. French aircraft carrier, Charles de Gaulle has been deployed and is currently on its way to Syria. 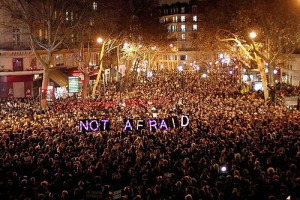 Furthermore, French authorities have carried out raids out through the nation, and caches of weapons stockpiled by Islamists have been seized by Police.

Friday’s terrorist attack may have finally awakened the West from its slumber. Once France and the rest of the West takes Islamic terrorism and expansionism seriously and commits to act decisively, it will be crushed and defeated.

The beginning of the end of the Islamic State has begun.