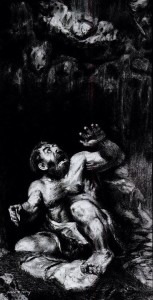 What despicable cowards the Paris terrorists are (were). As eye witness accounts of the horror inflicted on those inside the Bataclan theatre last Friday evening begin to be published, it has emerged that wheelchair bound patrons were executed first.

The depravity of Islamic terrorists, and their fondness for an easy target, is not new. Click here for a reminder of the terrible fate of cruise ship passenger Leon Klinghoffer at the hands of the PLO.

A genuine army comprised of actual human beings, fights its battles in uniform, not in masks. It wages war on the army of its enemy, not on innocent civilians, and not against those unable to fight back. A real army, made up of real men and women, tests its strength against its foe, face to face, on the field of battle.

In hindsight, coward seems the wrong word for the bottom feeders who carried out the Paris atrocity. It attributes them some humanity, albeit of an insipid and depraved variety, when they are deserving of none.