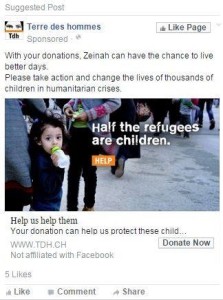 Welcome to The XYZ’s latest instalment of “What is wrong with this…” The latest doozy comes from Terre des Hommes, “a network of ten national organisations working for the rights of children and to promote equitable development without racial, religious, political, cultural or gender-based discrimination.”

Problem is, the figure quoted in this ad, stating that “half the refugees are children,” just doesn’t stack up. (Note that image they have used implies that it is half of the refugees coming to Europe, but both the wording and the image are vague enough to deny that they have deliberately misrepresented the facts.)

Here is evidence to the contrary, from the UN itself. 68% of the refugees coming to Europe are men, 13% are women, and a mere 19% are children.  (We know the UN is trying to push open borders on Europe, but not even UNHCR would stoop this low.) And we wouldn’t be surprised if half the claimed children were actually males between the ages of 16 and 17 years 11 months. Call it a hunch.

Furthermore, (and this may only be a quibble, but it is ever so grave,) but the ad also states that these migrants, who have travelled through multiple safe countries, with the sole aim of making it to Germany, are “refugees.” We didn’t think it was possible to pack so much wrong into so little a sentence.