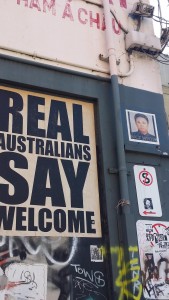 It is very difficult to put into words just how insulting this juxtaposition of imagery is. In a funky inner city suburb somewhere in Australia, a large poster proclaims that “Real Australians Say Welcome,” while a smaller poster cheekily hides off to its right, bearing a picture of North Korea’s former butcher and starver in chief, Kim Jong-il, with the caption “F!ck Whitey.” 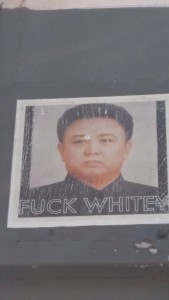 You could not get a starker example of the mixed messages afflicting people of European ancestry in the West. We are relentlessly implored to be tolerant, open minded, etc., toward people of other races, cultures and creeds, and to accept them with open arms into our countries. White Australia is out – the argument is made that for a country built on immigration, it would be racist to exclude any race. White Europe is out, too, but oddly we hear other self-serving arguments to explain why – somehow Europeans don’t deserve a homeland because they’re rich, or something. 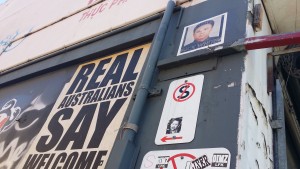 But it is also revealing. Usually, the deliberately confusing messages white people receive, about the fact that they are cursed at birth with the original sin of privilege, and should do everything they can to lift up the non-white “other” while demeaning their own identity, are more subtle. At least if this narrative is made more explicit, surely people will say enough is enough? Surely?

What we are seeing here is the literal definition of racism, against white people. It is also the third stage of genocide.