Since getting into the newspaper caper, we here at The XYZ have learned the hard way lessons which we had, until now, only read about. A key lesson has been the way in which stories we believe are of pivotal importance to the human race, and to the future course of history, become old news very quickly. It raises all sorts of questions about human nature and the human condition – are we as humans programmed to adapt very quickly to a new situation, whether it is one of immense leisure or happiness, or one of unimaginable tragedy? Is this adaptability one of the features which has made humans so successful? Does it also not lead us to accept misery when a better life is attainable, if only we would just make the right decisions?

Questions like this are, frankly, above my pay grade, but it has inspired this new series, entitled “The New Normal.” Let me present just one story which is no longer sensational, even though it would have been unthinkable, and ground breaking, beforehand.

The Middle East Migrant Crisis: Tens of thousands of refugees are flooding Europe every month.

2015 has seen a huge increase in what was already an alarming rate of uncontrolled migration across its borders, with 464 000 estimated to have arrived in the first 9 months. The associated drownings of people in the Medetteranean, the suffering faced by migrants as they live rough for months or years at a time, and the turmoil, logistical challenges, and threats to the cultural and demographic make-up of the destination countries, has risen too.

When the scale of the Middle East Migrant Crisis became apparent, the interest from the public spiked, especially when the footage of the drowned little boy on the shores of Europe became public. But it now appears that a large proportion of the population, and most of the governments of Europe, have accepted the new normal, that hundreds of thousands, and soon perhaps millions, of migrants are going to move across Europe’s borders every year, for the foreseeable future.

Places have been allocated for 200 000, at the expense of great political capital, but it will have to be done all over again in a few month’s time. 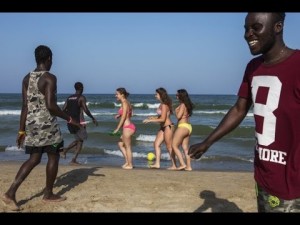 We should ask ourselves, is this an acceptable situation? Is it ok, is it normal, to live in a world where masses of people move every year from one region of the world to another, and the region to which they are moving should just let it happen, and adjust as best it can?

Or is there a way to stop this, to restore a semblance of what we once considered to be normality to our world? There is indeed a way. Australia is practically the only country in the Western world which has successfully halted the flow of uncontrolled migration. It has done it twice, and it achieved it the same way both times.

The Australian government made it clear that anybody coming to Australia outside of official channels would not be allowed into the country. It was a very difficult decision to make, and an even more difficult one to carry out, as it caused a lot of suffering in the short term, but it prevented far greater suffering in the long term. It stopped people drowning off Australia’s coasts, (as migrants are doing now by their thousands in the Mediterranean,) and Australia was ultimately able to increase its official migrant and refugee intake once its resources were no longer being wasted trying to cope with uncontrolled migration.

Europe can achieve the same result, if it is prepared to make a similarly difficult decision, and if it has the political and cultural will to carry it out. If it does not, then it will have to face the new normal that hundreds of thousands of new migrants will cross, uncontrolled, over its borders every month, and it will have to adjust to a state of permanent crisis, providing them with food, shelter, and medical aid in the near term, and permanent housing and employment, and a new demographic make-up in the long term.

What is going to be the new normal?

This is the first in a series of “The New Normal” articles The XYZ will be publishing. We hope to present a number of topics in this series, such as the eradication of Christians from the Middle East, or the growing invisibility of conservatives in Western public life, on which we hope to generate a mood of sustained, general discontent.

We welcome readers’ suggestions for this series. The bottom line is that “The New Normal” is simply not acceptable.