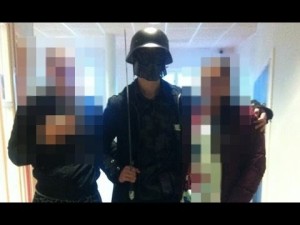 In a dramatic turn of events, the Australian Muslim community has accepted responsibility for yesterday’s murder in Sweden of a teacher and a student by a Swedish man brandishing a sword, after it was revealed that he was not a Muslim, but had a keen interest in Nazi Germany and Adolf Hitler.

After initially calling for more genuine dialogue, amid initial suspicions that the sword wielding murderer was a Muslim, a spokesperson for the Australian Muslim community said that “when the facts change, we change our mind.”  The spokesperson explained:

“If the Australian Muslim community is not responsible, but instead calls for more genuine dialogue from the government, whenever a Muslim commits violence against Western interests in the name of Islam, it is only logical that whenever a white person commits murder in the name of national socialism, the Australian Muslim community must be at fault.  It is with such irrefutable logic behind us that we must express our sincerest apology to the Swedish people for the murder committed by this white Nazi.

“On behalf of the Australian Muslim community, we are sorry.”

“We would also like to suggest that this sort of thing can be avoided in the future if the community can spend more time talking to white Nazis, not about them.”