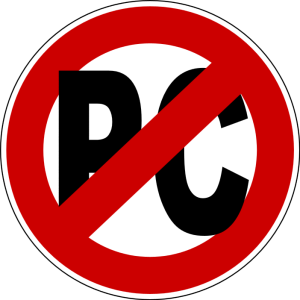 Readers may be familiar with the ‘Darwin Awards’ which are handed out each year to those homo sapiens who commit especially excessive acts of stupidity, usually ending with their deaths, and so ‘chlorinating the gene pool,’ as the Darwin’s website delightfully puts it. If there were a Darwin Award for institutional stupidity, we would be nominating the University of Wisconsin-Milwaukee (UWM), who have taken political correctness to an all new level of mind numbing nonsense, including the skillful act of denouncing, as a ‘microagression’ (we’re not making this up, really), the very term ‘politically correct’ itself.

Charming. But at least it’s clear who is included, and who will be off to re-education camp, come the revolution

Nonetheless, we are genuinely grateful to the University of Wisconsin-Milwaukee for giving us this fine moment of jocularity on a Friday afternoon (here in the non inclusive colony of Australia), by publishing this wonderful gem, and we quote…

“The university also claims the word “lame” is a microaggression that somehow both “ridicules and ignores the lives of amputees” and therefore shouldn’t be used.

Readers are invited to nominate other ‘microagressions,’ preferably after sinking one or two at a front bar or wine lounge somewhere in the free world (while it is still free). Cheers… if we can still say that, or is it also a microagression, excluding and humiliating the depressed?

When will the patent stupidity of political correctness end?