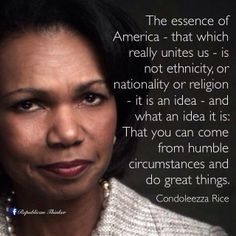 Our Quote of the Day comes from Condoleeza Rice, who served as the United States National Security Advisor from 2001 to 2005, and US Secretary of State from 2005 to 2009. We love this one, from a speech she made on August 30, 2012, at the Republican National Convention.

“The essence of America, that which really unites us is not ethnicity, or nationality or religion. It is an idea, and what an idea it is – that you can come from humble circumstances and do great things. That it doesn’t matter where you came from but where you are going.”

If we can quote her just a little more:

“Ours has never been a narrative of grievance and entitlement. We have not believed that I am doing poorly because you are doing well. We have not been envious of one another and jealous of each other’s success.”