Facetious title aside, today’s piece is a corollary to last week’s commentary on the detention and deportation of Brittany Pettibone and Martin Sellner, born from the news this week that Tommy Robinson was to follow through with the free speech event and deliver Sellner’s planned speech at Speakers Corner last weekend.

Amidst the usual media outrage machine and threats of violence and intimidation from the Left, the speech went off well, but more on that in a moment. Before I get into that, I wanted to take the opportunity to paint a picture of exactly what Sellner’s speech was originally intended to address.

Again this weekend I’ve had to read further sickening and troubling news from the UK, that once green and pleasant land, evidencing it’s government and public institutions’ complete capitulation to political correctness, the deliberate undermining of the rule of law, and the destruction of communities across the country, all in the name of appeasing Islam, that-which-must-never-be-blamed, that archaic and hate-filled ideology that no lesser luminary as Tony Blair once called “fundamentally incompatible with the modern world”.

Firstly, I want to mention Telford briefly in this piece, not to gloss over these latest disturbing events, especially not the murder of the 3 young girls in question, but simply because at this juncture Telford acts as a blip on the radar. It’s not unusual, not surprising, and will not be the last time this happens. It is merely representative of a litany of criminal negligence, a callow and indifferent police force and a justice system in the UK that has opted through cowardice to allow “social justice” and left-wing ideology to underpin a system which not only fails to prevent such instances as Telford but actively encourages them.

But it’s not just Telford; it’s Rotherham, Keighley, Newcastle, Rochdale, Peterborough, Oxford, Bristol and Aylesbury of the ones that I’m aware of or that have garnered some coverage in the media. Each of these should be reviewed in some detail and I’d urge any reader that hasn’t yet looked into these examples of unadulterated depravity that is this broken British culture, to do so. There’s no greater cure for the feel-good version of multicultural Britain (and what will be the future of Multicultural anywhere-else) than to take a good, hard look at the details of these cases and drink them in.

Thousands of vulnerable children, thousands of families, thousands of cases, thousands of reports, hundreds of perpetrators and who knows how many involved in the broader rape networks; all systematically covered up by the social services and ignored by local councils, aided and abetted by a police force incapable of acting for fear that they may be accused of racism against the majority Muslims implicated in the cases. Even now, several of those convicted are receiving legal aid to fight deportation orders – sound familiar?

The striking urgency of all this is best represented by the words of Britain’s Children’s Minister, Tom Loughton in 2012:

“We are only seeing the tip of the iceberg now. For too long it was something of a taboo issue in this country, little spoken about, little appreciated, little acknowledged or dealt with.”

That was six years ago.

Similarly, in hearings before the House of Commons in 2013, the Deputy Children’s Commissioner for England, Sue Berelowitz, noted:

That was five years ago.

What I find strange though is that while the mainstream media is largely all talking with one voice about this issue now, there’s seemingly still the need for senior government members and other commentators to speak out in support of the courts issuing tougher sentences and treating these cases with the severity that they deserve.

But it’s not just Muslim child-grooming gangs. Broken Britain is well represented in several other instances of criminality involving British Muslims and asylum seekers; there have been many of these but perhaps the most high profile was the “Justice for Chelsea” case.

Chelsey Wright, a young Sunderland woman, was gang raped by six “Asian men” in 2016; put through all kinds of hell during her ordeal, she managed to escape her captives, who were subsequently let off. The Rebel Media and Tommy Robinson organised a series of demonstrations during the course of 2017 to bring attention to the issue, to put some pressure on law enforcement and question their complete lack of action.

Although reported on via various independent news outlets, for example Daily Wire and Police Hour, what’s damning is I can find no link to either the BBC or papers like The Guardian that reported on anything to do with the case, until Robinson and Wright’s campaign started, after which the media focused a lot on denigrating Robinson and making much about the fact that the British National Party (BNP) had similarly taken up Chelsey’s cause; hence anti-Muslim racism became the central theme of the case.

Then there’s the issue of Female Genital Mutilation in the UK, where even such liberal dailies as The Guardian note that there are upwards of 144,000 young girls of east African, Nigerian and Middle Eastern origin at risk of FGM in England and Wales, despite it being illegal. Again, we could look through articles dating back several years to see not only the growth in the number of cases reported, thousands each year, but also the fact that no one is being prosecuted, as this Politico piece makes clear. Indeed, adherents of the “most feminist religion” in the UK are also known to take a lovely package holiday back home to Sudan, Somalia or other shithole country of origin to mutilate their young daughters under the guise of “attending a special ceremony” or some such cultural norm.

It’s interesting watching this report from the BBC back in 2012, and realising that despite the obvious issue and the urgency with which those interviewed speak, Britain has tiptoed around the issue of FGM for six further years.

One could add the rise of Sharia Law in Britain over the past decade as one further example of submission – with Sharia tribunals becoming the norm amongst particular Muslim communities despite reports a decade ago that the majority of British Muslims actually want nothing to do with Sharia of any kind. To me however, the striking figure is that even in 2008, upwards of 35% of British Muslims wanted it in some form or another, which should have been a cause of major concern to the British establishment even then.

These days of course, we have media in the UK celebrating the fact that the UK’s Anglican Archbishop has finally made a statement that Sharia is incompatible with Britain, fully ten years after the Spectator survey, while the BBC meanwhile stays true to its current SJW form by promulgating the ‘Britain is getting more racist and islamophobic’ trope instead of reporting anything of actual merit.

The examples that I’ve recorded here are but a small sample size – collated over the course of several hours. I’m hoping that from these the reader is noticing the theme – an obvious problem, an obvious root cause, a religion that is subverting the rule of law, and the British authorities remarkably clueless and ineffectual in their attempts to tackle it.

Lately I’ve tried increasingly to apply the principle of Occam’s Razor – the idea that when faced with a complicated problem with seemingly disparate causes, it is often the most obvious one which is correct. In this case, looking at the situation of Islam in Britain today, it strikes me as increasingly obvious that the issues are not just the result of a naive approach to multiculturalism or incompetence or a reluctance by the government to act, but are due to a concerted effort by those on the Left to demonise any and all criticism of Islam and the societal baggage that comes with it, and prevent those that otherwise would from speaking out.

The Left’s Social Justice has replaced the justice system and its Identity Politics has infiltrated the organs of state, rendering those whose job it is to manage – I dunno – such issues as paedophilia, the mutilation of young girls or the application of the law to women seeking to escape an arranged marriage, without the moral authority to do so for fear of the stigma of bigotry.

All of which brings me neatly back to Martin Sellner, and Tommy Robinson’s reading of Sellner’s planned speech yesterday at Speakers Corner. It’s a good speech, well attended. It sets out quite eloquently the free speech argument for Britons, but there’s one excerpt which resonates with me:

“We are being replaced, conquered by radical Islam, and we are not allowed to talk about it!”

I’ll leave you with this thought; given I’ve not read too much from the rabid “#metoo-patriarchy” feminists about any of this, can you imagine what the Left would be making of these grooming gang cases if the defendants had been majority white males, and the victims majority Muslim girls? Doesn’t even bear thinking about, does it. 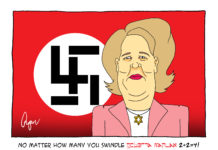