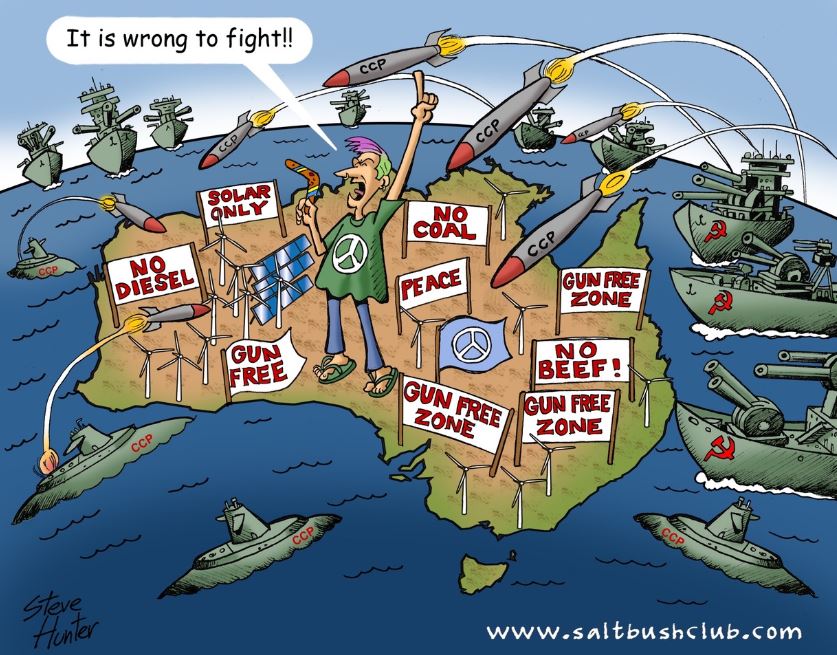 Australians are living in the latter days of the Anglo/American Empire.

For centuries now, world power centres have been moving west – from Mongolia, to Europe, to Britain, to North America, and now Asia beckons.

The Anglo/American Empire today resembles the decadent dying days of Rome. Europe is becoming a green energy wasteland, the British Empire died with Churchill, and America has dodderers and adolescents in charge.

Australia plans to defend the outback with battery-powered Bushmasters (good for battlefields with plenty of power points). The new defence minister has restored “rainbow morning teas” (banned by Peter Dutton). And an Australian iron oligarch and green hydrogen speculator, Andrew Forrest, aims to de-power Xi Jinping by inviting him to the Climate Summit.

Every chapter of history ends with a flood of barbarians.

Australia has not yet seen the campfires of an invading army – but our wealth and our powerful friends have bred a dangerous complacency in this fat lazy land.

Australians have always been sustained by hunter-gatherers, farmers and miners.

But now green dreamers think we can afford to destroy our processing and manufacturing industry with solar/wind dreams, shut the gate on mining and exploration, and turn farms, forests and grassland into industry-free world-heritage and first-nations wilderness.

The Comrade Societies have mastered one thing – conscripting all their resources to construct colossal war machines. And naive democracies are easily lulled into inaction by paper treaties such as the Munich Pact of 1938 signed by Hitler, Mussolini, Chamberlain and Daladier.

In November 1938, just after the signing of the Munich Pact, John Curtin (Leader of the Labor Party in the Australian Parliament, and later Prime Minister), made this statement:

“. . I say that any increase in defence expenditure appears to be an entirely unjustifiable and hysterical piece of panic propaganda.”

Just ten months later, in September 1939, Germany attacked Poland. Then Japan attacked the US base at Pearl Harbour in 1941. By 1942, the British Navy had lost their prized battleships “Prince of Wales” and “Repulse”, Singapore had fallen, Darwin had been bombed and Japanese troops crested the Owen Stanley Ranges and looked across the shallow sea to Australia. Surrender of Australia north of “The Brisbane Line” was discussed.

Then US General Douglas Macarthur came to Brisbane with men and weapons.

Of the billions of people who live in the Asia/Pacific region, less than one percent are Australian. Australia has enormous natural assets with identified but undeveloped resources of uranium, oil shale, green metals, coal, timber, sea foods and gas. Our only real title to this land is our willingness to use it and our ability to defend it.

Australia is surrounded by a marvellous moat – we need bayonets on the beaches, eagles in the sky, killer whales on the seas and lots of savage piranha underneath.

And we need an armed population. John Howard needs to be forever condemned for disarming honest people and then destroying all those confiscated guns. One day we will need them. (No gangsters or terrorists surrender their arms.)

In 1181, Henry 1 made it obligatory for EVERY able bodied man to keep arms, and America won the war of independence with armed militia. In the early days of WW2 the British trained with shotguns and broomsticks and Churchill pleaded with America for arms. Yet Australia pretends we have decades of time for labour unions to build our own submarines and some politician felt secure enough to scrap and bury 23 old but airworthy F111 aircraft at Swanbank in Queensland.

Politicians love costly high-tech stuff. But numbers play a key role in any battle. Thousands of armed drones controlled by scattered individuals may be more effective than one massively expensive high-tech fighter plane. Soon a sailor with a rocket in a row boat may be able to threaten an aircraft carrier.

If today’s Australia was involved in an armed engagement we would rapidly exhaust fuel and ammunition supplies. For these there are only two options – make it here, or store it here. It is too late to look for it even one day after a war starts.

Australian politicians have “solved” the looming fuel famine – they negotiated to buy crude oil stocks. But we will need a very long fuel delivery hose because these stocks are in America, part of their strategic stockpile. And is anyone keeping an eye on what Biden is doing with that oil?

Australia at war would soon face a manpower crisis. We cannot find people to harvest our food, so the flat-white brigade is unlikely to line up for military service. Hopefully we can rely on bikie gangs to step up? They can probably bring their own guns.

The cadet movement has been a valuable prep-school for recruitment and training for the armed services since 1903. But it has been gutted. Gough Whitlam disbanded the cadet corps in 1975 and since then it has been a political plaything. Judging from its web site, it is now a toughened-up girl guides unit.

Officialdom has also been largely hostile to rifle clubs which teach small arms skills, the Army Reserve is just a plaything, and today’s youth are told it is wrong to fight, no matter how provoked.

Timid Tim was taught
“It is wrong to fight,”
But Roaring Bill who killed him,
Thought it was all right.

Undoubtedly there is a place for women in our armed forces, but NOT in mixed-sex units where some men are likely to be either over-protective or over-amorous to the female members. An Aussie Amazon Battalion armed with machine pistols and lasers could be a formidable force, but no bi-sexual platoons thanks.

Russia and China recently signed a defence alliance. Will we take notice when they are joined by Iran and North Korea, or even Turkey, Afghanistan, Argentina, Syria or Pakistan?

Australia is a ripe melon defended by a small population, many of whom are chatting on social media, basking at the beach, or drinking in the pub. We waste resources in pointless climate wars, pacifists infect our Parliaments and Green politicians want to slash defence spending by 50%.

We need international friends and allies. The recent treaty with Japan and the AUKUS treaty are worthwhile, and good relations with Indonesia are essential.

But when the chips are down, we will have to defend ourselves. That will require tough troops, with big guns, little guns, motor fuels, ammunition, allies and treaties.