So, a year ago, we moved out of the city and into a coastal town with wetlands and farmland nearby. One day a couple of ducks wandered onto our front lawn.

“Oh how cute!” My wife exclaimed, and proceeded to feed them. By the end of the season “Daisy” was eating out of her hand, but “Duke” was just there for the free oats and was still suspicious of authority.

They went away for the autumn and winter but as Spring rolled around they came back to get more welfare. This would have been fine if one of the lucky ducks hadn’t quacked to his mates. I suspect Duke, the ungrateful entitled bastard, but I have no proof. Because after they had established that the handouts were a sure thing, one day we had four ducks at our front door instead of two.

Now ducks are messy fuckers at the best of times and to try and reduce the amount of Duck shit on the welcome mat, my wife stopped feeding Daisy from the hand at the door (where the ducks had taken to banging on the fly screen to let us know they wanted their welfare cheques… er, I mean, food stamps, er, I mean free oats) and just left a mound of oats on the front lawn and a bowl of water for them.

Then they started fighting.

Also, instead of just drinking the water they kept using it for a bath and a toilet. Dirty duckers! (I meant to say something else, but for once the auto spell correct seemed appropriate!).

Then the wood pigeons came!

Leaving oats on the grass attracted the attention of other birds. Wood pigeons came in numbers.

And started having sex.

The birds are the size of my hand, but the mating call of the South West Wood Pigeon is louder than the local beach shark alarm. 5am and “WHGGRWHOOL! WHGGRHOOL!” For Gods sake, GET A ROOM!

We used to have Wagtails. Tiny little things that used to hop around on the grass and shake their tail feathers whenever Ray Charles was singing the Twist on the radio. But mass non wagtail immigration was driving them off their ancestral land of front lawn.

The ducks would stretch their necks and lower their beaks to charge any bird that came near the mound of oats. Other ducks or other breeds of birds. Crows would caw, the odd seagull would screech. The pigeons would wait until the ducks were busy chasing their brethren and then sneak behind their backs and peck their prize.

For my wife it was all about the ducks. So to stop them fighting each other she put four mounds of oats down instead of one. It reduced the fighting but didn’t eliminate it.

A few days after this.

Eight ducks turned up on the front lawn!

It was time to shut down the aquatic avian welfare program. Sure, Ducks are a disadvantaged minority in this dry, hot land. Sure, wagtail supremacy had seen ducks excluded from front lawns for centuries of oppression and garden diversity is its strength, but our oats budget was unsustainable and grass change was threatening a total garden collapse.

So we cut the oats program for good.

Then war broke out!

A terrorist campaign of infiltration, subversion and destruction of vital infrastructure. Quackings of mass destruction.

The evening after we had cut the oats welfare program a lone, suicide duck, waddled into the house!

Driven by desperation and his craving for his next grain fix, Duke came with a mad plan of revenge. All we had done was tried to love him. Do you think he was grateful? No! Not Duke! No matter how much you gave him, he only expected more. His addiction was our fault! And we were going to give him his next hit, or pay!

I was eating a bowl of chilli cheese fries, when Duke waddled in. We locked eyes. I stood up. Duke took to the air.

He first panicked and tried to abort his mission. But he missed the crack in the sliding glass window and went into the glass itself.

He let go of his first poop bomb.

It left shrapnel all over the window.

He realised that he was done for, so he decided to complete his mission.

He flew back into the house.

Over my chilli cheese fries.

It was a direct hit!

With the mission a success he saw a light at the front window and tried to escape that way. But the window was solid. His pay load wasn’t and there was still plenty more bombs in the loading bay.

There was no point in trying to bring down Duke. It would only have led to mutually assured destruction. So I opened up the back glass sliding doors fully and guided Duke out of the house. His suicide mission was a complete success. He achieved everything he wanted, with no consequences whatsoever. He came prepared to die. He left with eternal life and 72 duck virgins in a pond in heaven.

That evening I went onto the front lawn to try and water it. But word of Duke’s success had spread.

I was confronted with a scene straight out of an Alfred Hitchcock movie. Birds everywhere! I tried to spray them with the water cannon. Tuned the hose onto “jet”. The birds just waddled or hopped, or flapped away a few feet, whilst others flanked me and moved back in.

Eventually I fled back into the house.

The ducks rule the front lawn now. The wagtails are gone. We thought we were the elites. We thought we could favour the ducks over the wagtails without consequence, but we only caused our own downfall in the end.

There is a wider lesson in all of this somewhere. A message about aboriginal welfare, immigration, economics and elites. But this is just a simple tail of quackonomics and the consequences of feeding wild ducks on your front lawn. 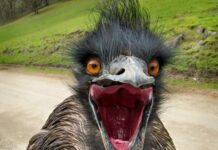