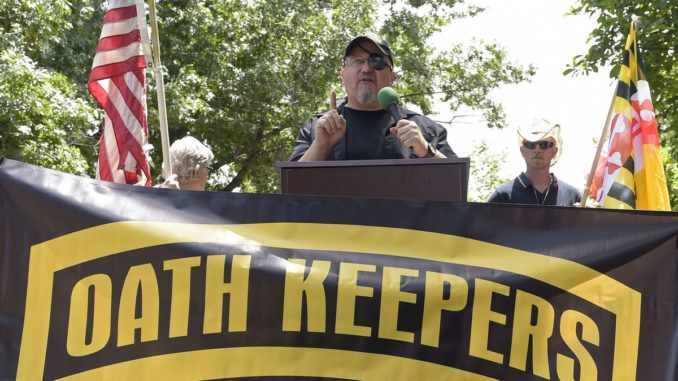 The role of FBI agitators in the January 6th incident has been the subject of significant controversy.

Some conservative political commentators hold that federal agents and paid agitators incited protesters and ushered members of the crowd to walk into the Capitol building, but so far evidence has been largely speculative.

The vast majority of January 6th defendants have opted to take plea deals rather than going to trial, where the use of informants to entrap people could be unearthed and publicized, leading to the matter remaining unexplored.

Representatives of the FBI and Department of Justice have largely dodged and ignored Congressional inquiries from Republicans on the matter, while the mainstream media has dismissed the prospect as a baseless conspiracy theory. The issue did not come up during the January 6th Committee hearings, which was commonly perceived as a Democratic Party publicity stunt.

Recent court filings in the ongoing seditious conspiracy case against Stewart Rhodes and alleged members of the Oathkeepers suggest that the federal government is anxious about the general public knowing the full extent of the undercover agent and informant presence inside the pro-Trump groups accused of organizing to enter the Capitol to prevent the certification of the 2020 election.

A September 21st motion by federal prosecutors in the case has asked Judge Amit Mehta to hide the identity of Confidential Human Sources (CHS) expected to have to testify at trial.

In federal parlance, a CHS generally refers to an individual providing intelligence or actionable information to law enforcement, usually in exchange for money or reduced punishment for unrelated crimes. Usually, a CHS is a paid informant dispatched to spy on a group or individual’s activities, though the term can also cover Cooperating Witnesses (CW), or individuals who have decided to testify against their associates in exchange for a plea bargain.

The use of the broad term, CHS rather than CW or CI (confidential informant), to describe subjects in the court filings suggests that the government plans to present a mix of confidential informants (infiltrators and spies) and Cooperating Witnesses for testimony in the Rhodes, et al. trial.

Though not a “smoking gun” in piecing together the puzzle of whether the FBI played a central role in the Capitol incident, the federal prosecutor wants to make sure no smoking gun ever appears.  The motion specifically expresses concern about the prospect of journalists and the public potentially identifying state assets involved in the Oathkeepers’ alleged actions on January 6th, as well as their involvement in potentially hundreds of cases of defendants who have been prosecuted, tried, or are currently under investigation:

The document also infers that the FBI had undercover assets, not just post hoc cooperating witnesses, inside of the Oathkeepers as the alleged conspiracy and actions unfolded.

Two of the three demands in pursuit of asset anonymity are centered on preventing defense attorneys from questioning witnesses about “FBI’s CHS program and the training and methods used by the FBI as part of their undercover operations.” Continuing: “Apart from the instant investigation, the defense shall be prohibited from asking any questions about the witnesses’ participation in past or pending investigations or undercover operations,” which reveals concern for the exposure of a broader intelligence operation in the events leading up to January 6th.

Legally speaking, the government’s argument that the court should suspend a defendant’s right to confront his accuser because the government-backed accuser is afraid for his safety is weak, but Judge Mehta has shown himself to be strongly predisposed towards granting the government’s motions so far.

For example, a ruling made on September 23rd granted federal prosecutors the right to skirt Brady requirements, which in theory compel prosecutors to disclose all pertinent evidence held by the state to the defense, by letting the Department of Justice decide on its own what potentially exculpatory civilian witness information in their possession attorneys for Rhodes and others can see and use.

The DOJ’s bad faith motions claiming “safety concerns” and adamant lack of transparency in the Rhodes case suggests, at minimum, a conspiracy against the public interest to know the full story about what transpired before and during January 6th.