The recent election in Italy has seen the elevation of the nation’s first female prime minister. This should not be a cause for celebration. Her victory might seem to be a blessing, given that the media is doing its very best to scream, “far-right dictator!” to the heavens, but such a reward is merely a distraction at best. She is just another bump in the road on the ever present downward trend.

Robert Malone has examined Meloni’s background, as well as her behaviour during the recent Covid fraud. She has direct ties to the WEF through her being an open member of the Aspen Institute. That in itself is enough to damn her as being controlled by the string pullers. Perhaps they simply desired to extricate their own men who have done all of the damage now that the four horsemen of the apocalypse seem to be knocking at the door, and thus Meloni will be their convenient scapegoat, the one left standing when the music stops.

Most Italians that I know refused to vote as they no longer wish to participate in a corrupt system that is now openly the enemy of the Italian people. Italy has not been an independent nation in control of its own destiny since 1945; it is firmly subjugated and directly controlled by Langley. However, events in Europe do seem to be taking a life of their own, and in such extraordinary times it is possible for some individuals in positions of power to find their courage and decide to act.

Malone quotes a letter from Archbishop Carlo Vigano on this topic dated the 27th of September 2022. It is worth reading in full, but it is his conclusion which is of the most importance.

The dystopian world of globalism must be rejected and fought against not only for our own sakes, but also for the sake of our children, to whom each of us wants to leave a peaceful future with solid economic prospects for raising a family, without feeling marginalized or criminalized because we do not accept resigning ourselves to subversive plans that have been made by those who want to make us eat insects and force us into slavery, with the sole purpose of making us poor and controlling us in every aspect of our daily lives.

But this – I say this as a Pastor, addressing myself in particular to Catholics – will be possible only if Italians recognize that the justice, peace, and prosperity of a Nation can be obtained only where Christ reigns, where His law is observed, and where the common good is placed ahead of personal profit and the thirst for power. Let us turn to the Lord, and the Lord will know how to reward our faithfulness. Let us turn with confidence to Mary Most Holy, our Heavenly Mother, asking her to intercede with Her Son for our beloved Italy.

As stirring as this is, how does it equate with Isaiah 3:12:

As for my people, children are their oppressors, and women rule over them. O my people, they that lead thee cause thee to err, and destroy the way of thy paths.

Father Z has brought our attention to the various logos of the Church Synod. I will post only one as an example. 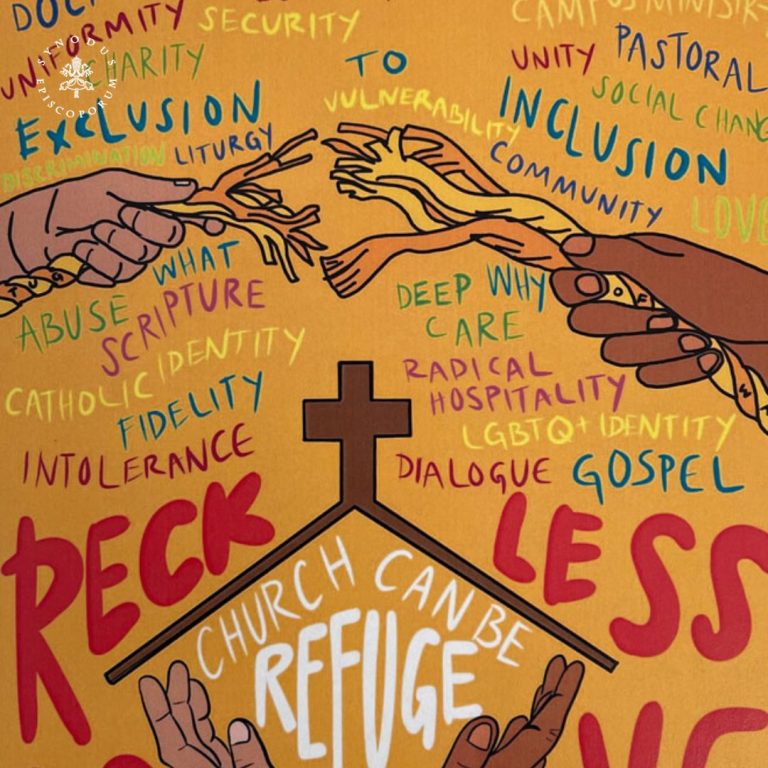 This sort of thing has become commonplace in the Church of late. The childlike writing, the simplistic artwork, the general incoherence present, all of these point to a dumbing down of the message. It is infantile and this it is a strategic effort to infantilize us. So we have children oppressing us while women rule over us. It seems that our paths are well on the way to being destroyed.

But Vigano is right in his plea for the nation to return to its Catholic roots. But such an act would be in direct conflict with modern materialism. It would seem that we are stuck and that by ourselves we won’t be able to extricate ourselves from our predicament.

But those four horsemen are indeed knocking at the door.