In a recent article for the World Economic Forum website, entitled “‘My Carbon’: An approach for inclusive and sustainable cities”, Kunal Kumar, the Mission Director of the Smart Cities Mission, Ministry of Housing and Urban Affairs of India, openly confirms what many of us have been saying for years, and what I have mentioned in previous articles, that the COVID-19 “pandemic” was nothing more than a global experiment in behavioural psychology and test of mass compliance. He also admits another prediction of ours; that all of this is based around furthering their magnum opus of social transformation; the great Global Warming con, and the drive to introduce digital Carbon credit scores.

Writing in a manner that could be ripped straight out of a Computing Forever video or a Piers Corbyn speech, the article lays out how, following the draconian measures that the public were forced into complying with during the COVID scamdemic, they can now be easily manipulated into accepting the Climate Con:

“COVID-19 was the test of social responsibility – A huge number of unimaginable restrictions for public health were adopted by billions of citizens across the world. There were numerous examples globally of maintaining social distancing, wearing masks, mass vaccinations and acceptance of contact-tracing applications for public health, which demonstrated the core of individual social responsibility.” 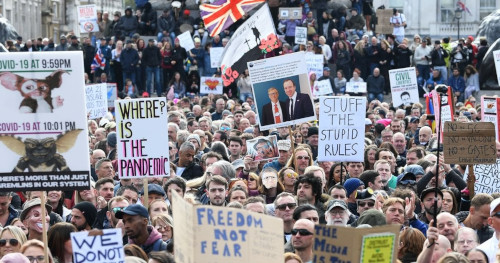 In a previous article, entitled “Normalising the Collapse”, I wrote about how the regime has “spent the last 2 years carrying out the global behavioural psychology experiment known as the “COVID pandemic”, to gauge the public’s reaction, to stress test their levels of obedience to a clearly deceitful and lying mass media machine, and also, to see how effective their various manipulative “nudge tactics” would be at corralling the masses into complying with an ever increasing number of bizarre and nonsensical rituals, while shaming those who didn’t toe the line.” Our analysis and the WEF’s own statements basically mirror each other at this point.

Continuing, the article delves into how “Fourth Industrial Revolution technology breakthroughs” such as AI, smart meters being installed in everyone’s homes, and the widespread usage of smartphones and QR scanners, can be utilised to track people’s carbon emissions, basically confirming that Carbon social credit score systems are on the agenda, something that we have been predicting for years, but something that the Green lobbyists have been advocating for even longer.

In 1996, environmentalist and Green Party activist David Fleming proposed the idea of Tradeable Energy Quotas (TEQs), a personal carbon trading scheme that would set annual limits on each individual citizen’s carbon footprints per year. It would set carbon limits on the amount of energy you can consume, the electricity you use, the petrol you buy, and the food you purchase. There would be a set number of credits issued by the state per year in the National Budget, and people who run out of credits would be able to buy other people’s unused credits on a quota marketplace, hence the “Tradeable” part. In essence, a kind of Marxist wealth redistribution. Not to mention, the number of credits available would decrease annually, in order to meet “net zero targets”, meaning with each passing year, you would have fewer and fewer ration points to spend (i.e., you will get poorer and poorer per year).

This isn’t just an idea restricted to a few eco-cranks however. Following his work being promoted by the Tyndall Centre for Climate Change Research, Fleming was invited to give evidence to the House of Lords Select Committee on Science and Technology in 2004, and Labour MP Colin Challen, founder of the All-Parliamentary Group on Climate Change and a man who wanted 2 hours of climate change propaganda to be made mandatory on primetime TV every week, attempted to introduce this scheme in Parliament that same year.

In 2006, David Miliband, influenced by Fleming’s work, commissioned a study into this idea, stating that “a personal carbon allowance and trading system has the potential to achieve emissions savings in a fairer way than carbon taxes, and would reward people for leading low-carbon lifestyles”, and in May 2008, the Department of Energy and Climate Change presented the pre-feasibility study stating their support for the proposal, and that their only opposition was that it was “too ahead of its time”. The Environmental Audit Committee also expressed their support for the proposal that same month, reporting that “personal carbon trading could be essential in helping to reduce our national carbon footprint”.

Three years later, in January 2011, the UK All Parliamentary Group on Peak Oil published a report on TEQs, authored by the late David Fleming (who had died in 2010) and fellow eco-Marxist Shaun Chamberlin, and contributed to by the likes of Agenda 21 supporter Jonathan Porritt and “Transition Towns” activist Rob Hopkins as well as a range of sitting MPs including: Lib Dem MP John Hemming; Caroline Lucas, leader of the Green Party of England and Wales and MP; Labour MP Colin Challen; and Conservative MP Tim Yeo, all of whom attended a meeting in the Houses of Parliament where they gave speeches endorsing the proposal. Fascinating how all of the varied mainstream parties agree on the introduction of such draconian measures.

In September 2018, Green Party MEP Molly Scott Cato chaired a meeting in the European Commission, along with Riccardo Mastini of “Friends of the Earth” and other Green agenda lobbyists embedded within the Commission demanding that this system be imposed across the entirety of the EU. Bear in mind that the EU Emissions Trading System (EU ETS) has been in place at the nation state level since 2005, setting a cap on national carbon emissions across the bloc and forcing nations that exceed their limits to purchase spare EU allowances from other nations, with the aim of a 55% reduction in emissions by 2030, and net zero by 2050. In other words, a scheme to deindustrialise the entirety of Europe and plunge Europeans into poverty and deprivation. Now, these Climate Crooks want this regressive system to be imposed on a personal, individual level. And the 2008 Climate Change Act in the UK already has provisions for such a scheme to be implemented in the future.

The idea did seem to die off for a few years, until the COVID scamdemic, when in August of last year, a study was published in Nature Sustainability, following the latest propagandist report from the IPCC. In it, the authors celebrate how the idea of Personal Carbon Allowances (PCAs), once considered “ahead of its time” and “politically impossible” could now be easily implemented following the public willingly complying with the COVID lockdowns and mass behavioural changes like mask wearing and social distancing, the widespread acceptance of contact tracing apps and QR code passes in public life, as well as with advances in AI and digital surveillance technology.

The proponents of this technocratic nightmare claiming that it would be a “fair and just system” compared to Carbon taxes conveniently ignore the fact that the rich would easily be able to bypass such a scheme (just as they do now), as they could simply purchase large numbers of excess credits or buy carbon offsets in order to cover for the huge carbon footprints given off by their private jets, security convoys and massive mansions, or the mining of the lithium needed for the battery in their Tesla or Polestar. While you are forced to spend thousands having a heat pump installed in your home, are priced out of using your car, and are unable to put food on the table. 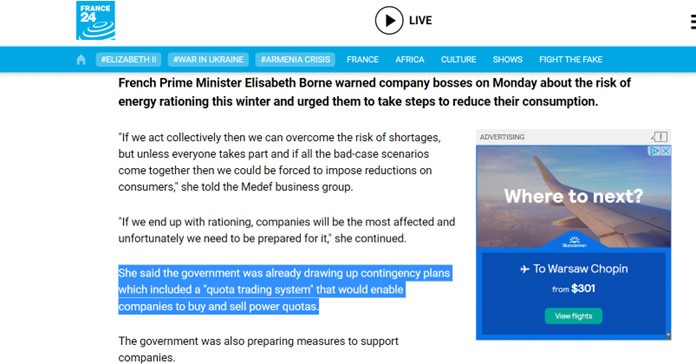 When you look around and see what is going on with the global energy crisis and “cost of living”, you can begin to see how this agenda may play out. Talk of “energy rationing” is already permeating into the mainstream, and many European countries are already doing it. In fact, the French PM recently stated that an energy quota system may be implemented over the winter to deal with the energy shortages. Wouldn’t it be just convenient for them to implement an energy rationing system out of necessity, only for it to eventually morph into Carbon allowances? We are also seeing companies like Swedish fintech firm Doconomy teaming up with Mastercard to develop a credit card with a Carbon spending limit.

This is the end goal of the climate agenda that is being forced down our throats 24/7. This is where this insidious, anti-human scam was always intended to go. You see, the Climate Change Hoax is about more than just the government taxing us more, a few Green lobbyists lining their pockets, and their hidden financiers robbing the planet blind. It’s about more than just China hoovering up the last few industrial bases in our lands. It’s about the imposition of a new form of Communism, and the total enslavement of our people to technology and a mass surveillance state. While for the likes of George Monbiot, Greta Thunberg, AOC and Roger Hallam, the climate agenda is simply the perfect stalking horse for them to impose their varied social justice crusades upon us all, while they LARP around as some kind of Poundland John Muir, hyped up on a diet of consuming “An Inconvenient Truth”, “The Day After Tomorrow” and “Don’t Look Up”.

This is why the proponents of the Green New Deal rarely talk about the massive pollution coming out of China or India (and when they do, surprise, it’s still our fault), while tiny corners of Europe like the Isle of Man are being ordered to become “net zero”. This is why so many climate activists and propagandists like Caroline Lucas oppose nuclear power, the only truly reliable form of “low carbon energy”, because it would provide a solid base load, and would eliminate the need for the implementation of their Green Communist agenda. They point to the cost (ignoring the cost of all of their green subsidies) and the issue of nuclear waste, but surely if you think the planet is going to burn, those problems are minor in comparison. I mean, that’s the excuse they give us when we point out that their policies will only make us colder, poorer, hungrier and less free.

And of course, they’ll never discuss the issue of mass immigration encroaching on the countryside and raising the “carbon footprint” that these watermelon environmentalists love to complain about so much. Interesting how that is never a priority for these people. But of course, that is thanks to vested interests astroturfing these environmental groups, as happened with the Sierra Club.

We do need real environmentalism. One that is rooted in the protection and conservation of our natural ecosystems, ensuring a natural balance to the world’s population, and that we are as self-sufficient as a nation as possible. But we also must reject this Climate Con in whatever form it may take, as it is nothing but a Trojan Horse for the Great Reset.