I know, right? Whatever.

Except the Australian Lying Press blew up the story and defamed the group, yet went strangely silent when the story reached its violent climax.

Thomas Sewell has provided a detailed summary of the events in this livestream on Odysee. Below is a more generalised account, plus some brief analysis.

On August 2, 2022, Jimeone Roberts visited the Irish Times pub with a couple of other nationalist activists to show support for Neil Erikson in an upcoming court case. The homosexual bartender did not like the look of them and queried them regarding their political beliefs. 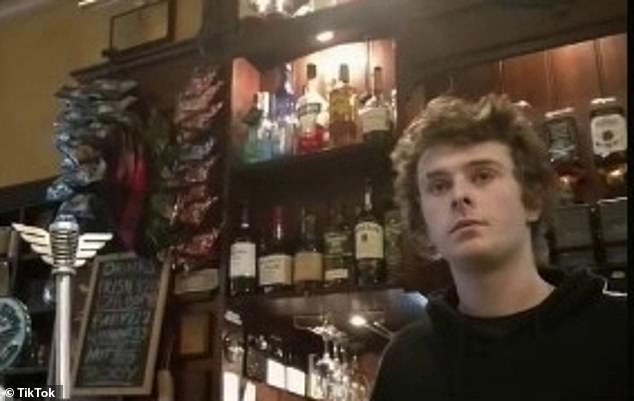 The bartender escalated the situation to the point that he openly spat in Jim Roberts’ beer in front of him. One of Roberts’ friends demanded their money back, the barman complied, they were asked to leave, which they did.

Spitting in someone’s beer is a crime in Australia, and if proven to have been done deliberately and with malicious intent, and particularly by those who served it, it carries severe financial and criminal penalties.

A friend of Roberts contacted the owner of the Irish Times and communicated this fact, making it clear the intention to take the matter to court but offering the opportunity to settle the matter out of court.

The owner of the Irish Times understood the seriousness of the matter, having already fired the two staff involved, and settled the matter for several hundred dollars.

It was at this point that the Australian Lying Press stepped in, misrepresenting and lying about events. I have not read any of their articles on the matter and neither should you. The key point is that jewish journalist Nick McKenzie defamed the nationalists by claiming that they had “extorted” the owner of the Irish Times. 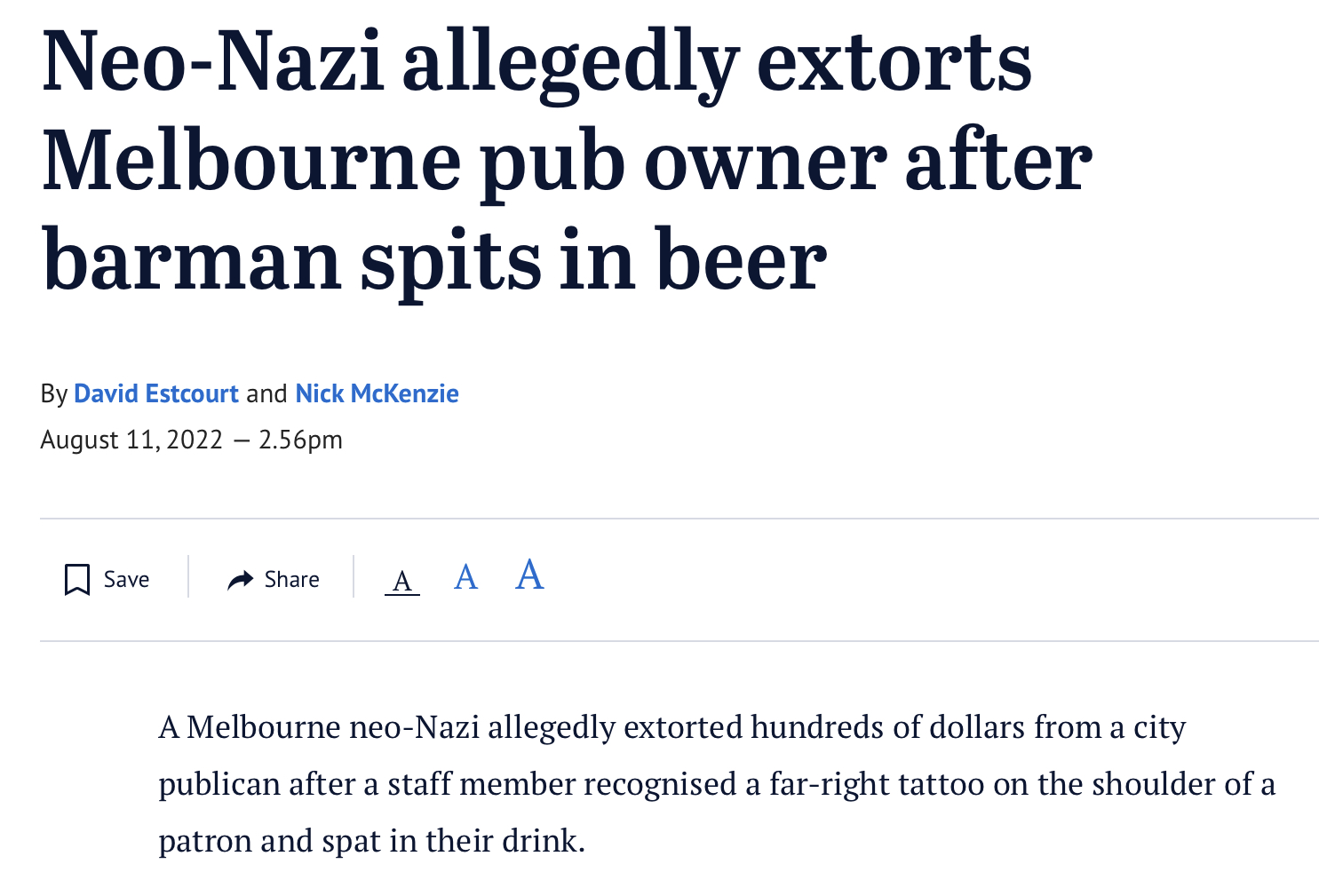 When the pub owner was contacted to find out what  had actually been said to the media, it was claimed they had not spoken to The Age. However, the owner claimed that Australian security services had asked leading questions, asking if they “felt extorted”. This indicates that police may have fed the information to McKenzie.

It appears that the police and the Lying Press were colluding to frame a narrative around the incident with the possibility of setting up a prosecution for “extortion”, which as these facts clearly show, is completely ridiculous.

As was demonstrated by our analysis of the Channel 9 mole affair and the events which led to Thomas Sewell being imprisoned for 7 months without trial, a pattern of collusion between Australia’s intelligence services, police and Lying Press to frame nationalists as belligerent is well established.

This matters, because Sewell was presented as having launched an unprovoked attack on an unlicensed security guard outside the Channel 9 officers on March 1, 2021, despite the footage which he released demonstrating he acted in self defence. The fact that the security footage from Channel 9 has never been released bolsters the self defence case.

These factors are important to consider when examining the events of the night of Saturday 13 August, 2022. Jimeone Roberts, Thomas Sewell and several other activist friends from the EAM went back to the Irish Times, put the compensation money on a bar tab and had a night out. All attendees left without incident, most before midnight, but Roberts and one or two others kicked on at another venue.

Police attended, pepper sprayed both Roberts and his friend who was with him, and allowed the attackers to escape.

Very little is known about what happened between then and now, however what we do know is that Jim Roberts has been in an intensive care unit in hospital, under an induced coma for several days.

At the time of publication there has been absolutely no mention of this fact by the mainstream Lying Press.

This constitutes the most violent assault against an Australian nationalist since Ryan Fletcher was assaulted by antifa terrorists at the Melbourne Showgrounds in 2016. As with the latest incident, Victoria Police appear to have displayed wilful incompetence in allowing the attackers to escape and in failing to investigate the matter properly.

The impression is given that enforcement of the law is not the priority for the political police, instead the aim is to disrupt the activities of ordinary Australians who just want their country back. The violence committed by antifa terrorists and the local diversity against Australian nationalists is given a free pass.

In conclusion, questions must be asked of the role played by the Australian Lying Press and particularly by Nick McKenzie. After spending several days defaming a man and his friends as an ‘alleged extortionist’, the target of their unsubstantiated attacks now lies in a coma.

Were the attackers incited by lies written about Jim Roberts?

Furthermore, as was demonstrated by an examination of the extremely poor evidence presented against Thomas Sewell in 2021, it is reasonable to believe that the Australian Lying Press colluded not only with intelligence and security services, but with antifa terrorists.

It is reasonable to believe that this collusion is ongoing. Was information passed between these four groups about Jim Roberts’ whereabouts on the night of August 13, and if so did this have any part to play in the assault against him?

We simply do not know the answers to these questions. There needs to be a thorough investigation, however given the factors outlined here, such an investigation is highly unlikely.

If you would like to donate to Jimeone to aid him financially when he recovers, you can do so at GiveSendGo.