On Wednesday evening we streamed the second XYZ Live reboot show. I was joined by Fenian and Nolzy from The Racer’s War On Everything. We covered a lot of material, and sorted out the tech and format issues with which we struggled last week.

The title of the show is a dig at the NSW Liberal Party, who came up with an ingenious method of saving $25 million for an aboriginal flag on the Sydney Harbour Bridge, by simply scrapping the NSW flag. 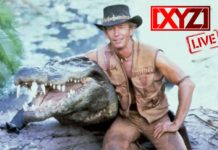