If you can give up citizenship of a country just because someone hurt your feelings, doesn’t that prove that the modern conceptualisation of citizenship is meaningless?

Writer and activist Yassmin Abdel-Magied says she may never return to Australia and can’t even bear to hear an Aussie accent more than five years after she fled the country to escape the backlash from her infamous Anzac Day Facebook post.

Living in self-imposed exile in London since July 2017, Ms Abdel-Magied has only been back to Australia a handful of times, sometimes only for visa reasons to stay in the UK.

The Sudanese-born, 31-year-old told an interviewer in London that if she even hears an Australian accent now, ‘I will leave’.

Yassmin whatshername is Sudanese. She is not Australian. She is triggered because this fact was made explicitly clear to her when she insulted the Anzacs several years ago. 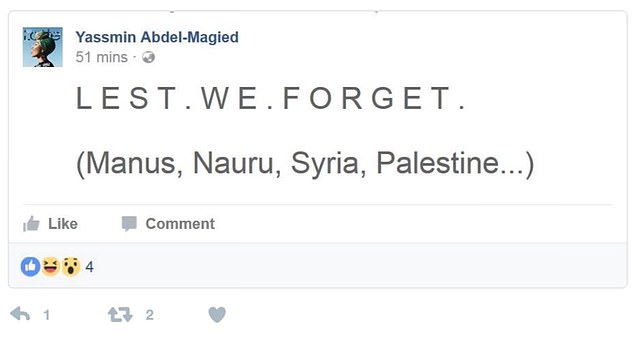 Her entire schtick was that she was an immigrant who wanted to invert what it meant to be Australian. Her book is an admission that she is a revolutionary:

In her new book, Talking About A Revolution, Ms Abdel-Magied wrote about giving up her Australian citizenship after deciding that Britain or perhaps the US would be her permanent home in the future.

Notice she doesn’t want to go back to her shithole home, she wants to keep country shopping. She’s little more than a globalist traitor to her own people who is determined to further subvert Anglo countries.

Yassmin was the worst kind of fake Australian “citizen”, the type who gets to this country and then demands we change precisely because they are different, while simultaneously gaslighting us that we are all the same or something.

As reported this week, fake Australians who campaigned explicitly on antiwhite platforms have now entered the federal parliament. Yassmin only stuck out though precisely because she was so odious.

This is proof that bullying works and we should keep it up. Making life difficult for fake Australians is how we can encourage them to leave of their own accord, which is why so many laws have been passed trying to stop so-called “racism”. The government wants fake Australians to stay for economic and Great Replacement reasons.

So, we’re going to have to bully the government a little as well.