Can you imagine a more sickening, disgusting, evil that would try to ban the world’s oldest symbol of Divinity, Prosperity and Wellbeing? 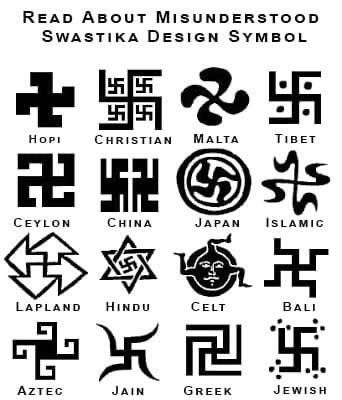 The oldest Swastika was found in the Ukraine and is over 12,000 years. Our people revered this symbol and used it all over Europe, Eurasia and around the world. All the religions created by Aryans such as Paganism, Jainism, Hinduism, Buddhism, etc., cherish this ancient symbol.

Christians, Taoists and many other religions including American Indian tribes feature and respect the Swastika too.

Long before the Dutch arrived in Bali our symbol was carved onto their houses of worship.

Can you imagine moving to someone else’s country and spending the last 5 years lobbying to outlaw their symbols?

What kind of human would do such a thing? Only pure evil would see a symbol that represents Divinity, Prosperity and Wellbeing as bad:

‘This is a war between good and evil, and we have to win this war.’

If we ban a symbol because it was used in wartime, then we will have to ban every symbol in the world, starting with the hammer and sickle due to the millions who died under it.

Even just the Ukrainian Holodomor where over 8 million White Christians were genocided by Jewish supremacists such as Genrikh Yogoda and Lev Bronstein (Trotsky) should be enough to get every associated symbol banned. The hammer and sickle, the Menorah, the red 5 pointed star and the 6 pointed star that was appropriated from ancient Aryans and renamed the ‘Star of David’.

If you think that evil will stop at the banning of one symbol then you have another thing coming. It will just move to the next thing and the thumb screws will get tighter. Evil may have a win but Good will win in the end. Keep your head held high and may Divinity, Prosperity and Wellbeing guide you to victory.