People say that voting will not save us. They say that the establishment media including the ABC only promote the Pepsi and Coke parties and the Greens and Nationals just cling to their hosts like parasites so voting is a waste of time. True, but if there was ever a possibility of change in an Australian election, this is the one.

Never in Australian history has the establishment and their parties (Liberals, Labor, Nationals, Greens) ever subjected us to two years of home detention, experimental medication coercion, job losses, bankruptcies, forced medication mandates, police raids for Facebook posts, rubber bullets, choking, pepper spray in the face, tramplings, prevention from visiting dying relatives across borders, suicides and relentless media propaganda to divide families and friends. If Australians still vote for the major parties then voting will not save us.

Interestingly if you put a major party anywhere but the bottom of the list they still have a chance of getting a place in the election with your vote. This is where the brilliant work of the Put the Majors Last campaign comes in. Please share their videos and website far and wide. They explain how the system works and how we can beat the majors. They even have an interactive page to create your own how to vote card by inputting your preferred candidate.

To my knowledge there are no freedom friendly minor parties running in the election that are interested in stopping Australians from being erased by third world immigration but we need to create openings. This election could create real change but if it fails the only solution will be to legally infiltrate the Nationals and Greens to change the Nationals back to a nationalist party and the Greens back to an environmental party that stops clearing the bush to build houses for their migrants.

White people make up just 8% of the world’s population so if you flood all White majority countries with nonwhites you permanently erase White children forever. There will still be a billion Africans in Africa, a billion Indians in India, and 2 billion Asians in Asia. Multiculturalism is just a code word for White Genocide. 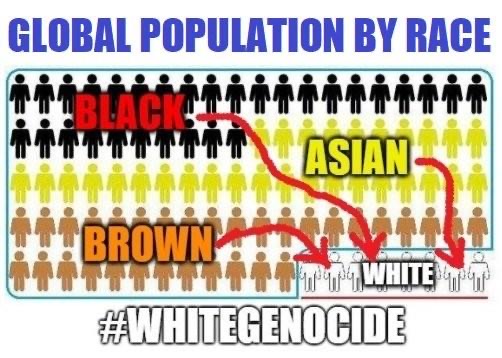