Have you noticed when you’re out and about that aside from Asians and elderly Boomers, the only people who wear masks are White women who would otherwise be nominally pretty?

My theory is that they understand at least subconsciously that so-called “liberation” is a con which requires them to be sexually available anywhere and everywhere. It’s why in the 2010’s they were obsessed with refugees. 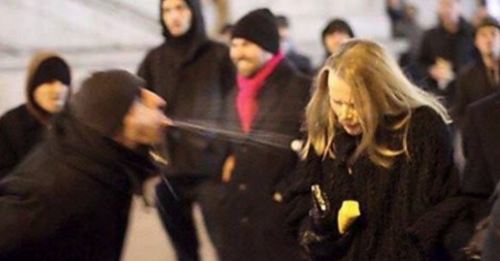 The Islamic dress code offered them the protection which the modern church now refuses to provide. White women may become less enthusiastic about Islam now that Covid restrictions give them the excuse to cover their faces.

As an added bonus, they get to keep their clitoris.

There are calls to reinstate a mask mandate in Victoria ahead of a predicted winter surge in COVID and flu cases. #9Today pic.twitter.com/p9ZiWL31XG

Note the gravity with which the reportress uses the term “settings”. Apparently, a supermarket is a “setting”. The masses are being conditioned to use bureaucratic language for every…. setting:

The Australian Medical Association says Victorians should voluntarily don masks at the supermarket, indoor theatres and anywhere else where there is a high chance of spreading winter viruses.

Conditions in the state’s hospitals have been deteriorating worryingly in recent weeks. Wards are full and ambulance ramping is widespread. Doctors have declared emergency departments to be dangerous, and epidemiologists expect the pressure on the health system to worsen as the temperature drops, with a further surge in COVID-19 cases and a growing flu season.

The president of the Victorian branch of the Australian Medical Association, Dr Roderick McRae, said the doctors group would be supportive of a move to reinstate some “moderate, but sensible [COVID-19] requirements” such as masks in supermarkets, theatres, concert halls and football stadiums.

But with such a decision politically fraught and not expected in the short-term, McRae instead called on people to take their own precautions for the good of the community, including avoiding mass events and getting a third vaccine.

The Andrews government is getting slammed because the hospital system, and in particular the ambulance system, is at breaking point. Given that Dictator Dan is secretly fronting up to corruption hearings every other week, he doesn’t need Victorians remembering that he was elected on the back of unrealistic promises to the Ambulance Union.

He’d love to lock us all down again but he can’t, because it’s an election year. Victorians hate Covid restrictions only slightly more than they hate Daniel Andrews himself. He narrowly avoided a revolution last year, and if he is to have any chance of retaining electoral support in the suburbs and the regions he must keep Victoria open.

It’s quite fun to watch him squirm. With the option of brutal dictatorship temporarily shelved, he’s been reduced to begging.

The flu is back…and he won’t “tell you” but he will “ask you” apparently to get a flu shot now. It’s the health system under pressure, again. pic.twitter.com/ZYzwCpZI4g

If he is to bring back any kind of restrictions, he needs to make it look as though there is at least some skerrick of community support. So, he’s lent on the AMA to call for mask restrictions and make it seem like it was their idea.

However, the public is rapidly losing respect for all our public institutions. No amount of collusion between the government, the medical sector and the Lying Press is going to be able to create the illusion of consensus in favour of compulsory face masks.

The people will only take so much.