Bernie Finn is one of the few men remaining in public life who is prepared to state the bleeding obvious about the totalitarian lockdowns and vaccine mandates, the grooming of children and the ritual sacrifice to satan of the unborn.

For this, he has been labelled an “extremist” and has been effectively banished from any position of authority within the Victorian Opposition:

Bernie Finn came under fire last week after posting on Facebook he was “praying” for abortion to be banned in Victoria as it emerged the US Supreme Court could overturn its landmark Roe v Wade decision.

In a follow-up comment, he told a user he did not support abortion, even in cases where a woman is sexually assaulted.

There is nothing controversial about what Bernie has said. Indeed he represents the views of the vast majority of Victorians:

The entire political class is dedicated to satan: 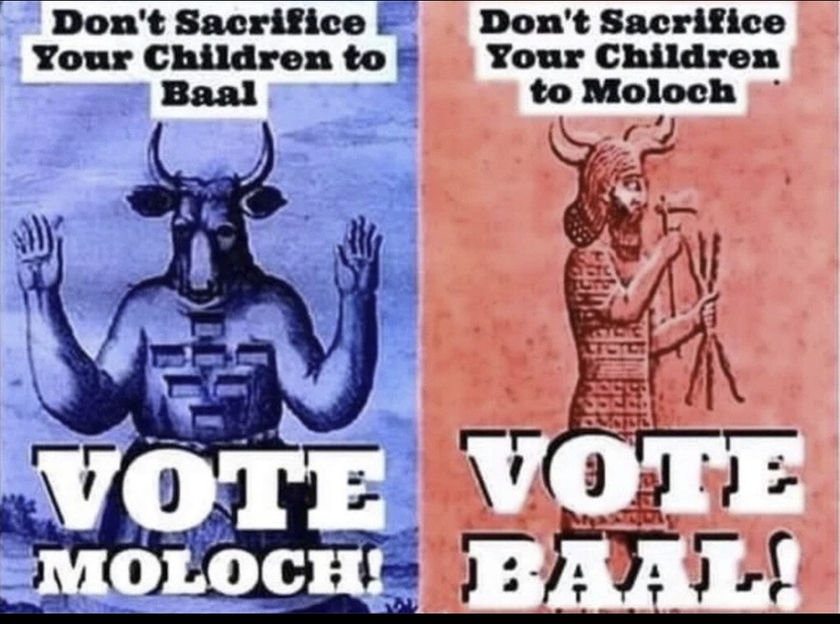 Anybody who opposes this must be expelled:

Finn wrote to colleagues on Monday to notify them he had resigned as opposition whip in the Legislative Council.

A whip’s job is to ensure fellow party members are present for votes.

Gordon Rich-Phillips was elected as Finn’s replacement after a partyroom meeting on Tuesday morning.

After the meeting, Finn declared he did not feel abandoned by the party, but “there was a degree of disloyalty involved”.

The upper house MP has not spoken to Guy in months and doubled down on his belief rape victims should not be allowed to have an abortion.

“It’s a question of deciding who should live or die and I think everybody should be given their chance,” he told reporters at parliament.

The argument of ritual sacrifice advocates is basically: “Because your mum was raped we have to kill you.” It is also a Trojan Horse, as the vast majority of so-called “abortions” are conducted with no questions asked.

Finn doesn’t believe his views will cut the Liberals’ vote at the November state election and wants to remain in the party ahead of facing preselection in coming months.

Of course it won’t. His views are normal. Most people oppose the ritual sacrifice of children.

He has repeatedly stoked online controversy, calling the state’s police force a “despot’s militia”, describing Premier Daniel Andrews in an indecent position with a goat and posting a meme about a Chinese rocket falling on the ABC or his political rivals.

He is practically the only State Liberal MP who had the balls to call out the totalitarian lockdowns and the brutal actions of Victoria Police for what they were. He also recently pointed out that Victorian children who manage to avoid ritual sacrifice to satan are being groomed by degenerates at school:

Upper house crossbencher Fiona Patten said women were getting “very tired of this rhetoric coming out of the wannabe (US) Republicans like Bernie Finn”, while Greens leader Samantha Ratnam called the views “abhorrent” and said the Liberals were facing questions about their identity.

The icing on the cake comes from Dictator Dan himself:

Daniel Andrews has slammed Bernie Finn, saying his “extreme” views, pose a threat to Victorian women, who are “sick” of blokes telling them what to do with their bodies.

This, from the man who forced Victorians to choose between injecting poison and keeping their jobs.

What we should remember about the hypocrisy of satanist groomers is that they are consistently hypocritical, and they consistently fight for the destruction of everything which is good, beautiful and true. Thus they flip from superficial argument to superficial argument. They don’t care if their arguments contradict each other from day to day. What remains consistent is their determination to defy God and destroy human life.