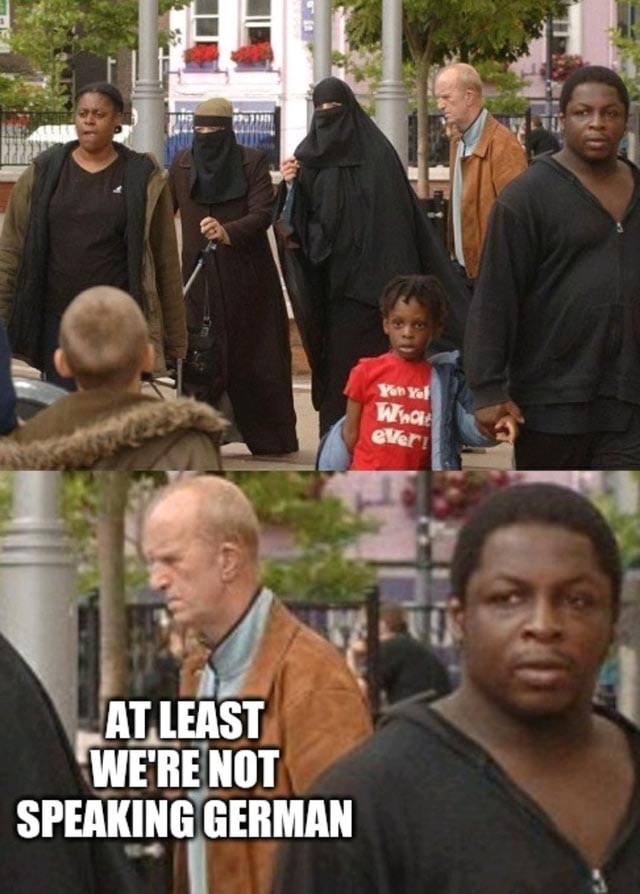 Before any person gets good at swimming, they must suffer their heads going under water and their mouths filling up with the fear of drowning. Before any person gets good at driving, they must suffer their heads getting the thought of “maybe I might crash” and their mouths filling with either screams of fear or excitement. Before we learn to achieve White Power and White separation, we must allow our heads to be beaten in with the sight of so many invaders and traitors around us, with our ears being filled with lies about how being stabbed in the back is good for us and that our isolation is good and that doing nothing is good and that doing something is an act of a Fed. Only by living through the lies and through the dead and dying world we already live in can we truly forge a new world out of the ashes.

Every day I am surrounded by invaders, not immigrants, invaders. Because as far as I know, I never asked for them and neither did you. You were told that they would enrich us, that they would bring our culture, that these people would keep up with an ageing population. You were drowned in the lies, I was drowned in them, we all were. The series Go Back To Where You Came From on SBS was nothing less than a Two Minutes Hate session not for the people on the screen, but ourselves. Oh, what a shock it is for Australia to defend its borders! Oh, the horror of realising that this country and its people have a fucking spine! I should have raised my voice or my concern at this guilt-tripping session. I should have said that it is not wrong to put a foot down in protest!

The Christian sensibilities have always been at the heart of the struggle for racially naive Whites. Many cite how Jesus, Mary and Joseph fled from their homes to Egypt as a reason as to why Christians have to accept refugees and nonwhites into White countries. What they fail to mention, whether they are maliciously omitting it or they are simply retarded, is that Jesus and his parents returned to Palestine upon Herod’s death. In other words, they returned to Nazareth. They returned to the lands that they belonged to once it was at peace. It should have been the process that the Vietnamese, the Lebanese, the Arabs, the Africans, the Latinos, the Asians and Pacific Islanders should have followed when they all came here into this country during their struggles. After all, Australia was established for the White Race and in the span of a hundred years or so became one of the great outposts of the White World.

What should have been a great inculcation of my ancestor’s labour and values instead becomes a great ethereal, arbitrary mess of words, jargons and slogans that are neither recognisable, enforceable nor acceptable to anyone in this country. The concept of mateship only works if every man is alike and it means nothing if cultural sensitivities from ten thousand miles away make themselves known. The sight of Ramadan signs at the nearby supermarket, the presence of Arabic in the library of the TAFE, the presence of women in burqas or niqabs, it all makes Melbourne into Mecca or Beirut in an instant. The hearing of several languages unknown makes for an easy headache. The cosmopolitanism of the last couple of decades allowed for this to happen with breakneck speed and with absolute ruthlessness.

The victory of the free world over the Axis Powers (AKA where Jewish-led Whites and nonwhites slaughtered the only Whites that could have saved our race) meant that the Jews in power had license to do whatever they wanted. Mix that with the Holocaust hoax and it led to a long process of drowning the White Race with irrelevant shit, paranoia, gaslighting, hypocrisy and self-condemnation. The cosmopolitan dreck took the spilled blood of our ancestors and used it to justify policies that our ancestors would have been appalled by. And the consequences of those policies led to more laws and policy that went even further in the wrong direction. Not only were our warrior ancestors’ names used in vain, but so were their kids who had the chance to build something for this country. Their efforts were tarnished and are still being tarnished for every second that gays and trannies walk about the streets, that nonwhites babble in their barbarian tongues and that women and men think not on the blood spilled at Beersheba but on the latest TikTok video or the latest drummed up drama. Such as Will Smith being a cuck or the War in the Ukraine. They have been guilt-tripped into thinking that there is no other option. There’s a reason why “Oh well, at least we’re not speaking German,” is not a excuse for the filth that is being peddled to children, peddled to women and peddled to men in this country.

Being around the “normal people,” it does nothing but remind me of the ever-present, ever-lurking danger of my absence or my failure to contribute to the cause. It reminds me of what will happen if I drown, so to speak. I do not want to fail, I do not want to see this country give way to a rotten corpse. I will not allow it and I will not speak of it with joy. No one does when men and women sink beneath the waves. Eternity among the stars means nothing when the Earth is one confused and turbulent mess of races awaiting a pitiful end. When it becomes one useless, pitiful husk of a thing. And there are people out there that would sooner worship their lack of living standards, their lack of community, their lack of racial unity, their lack of a spine if it meant that they would never face God in the face, never face the truth before them or face the wrath of those that stand and fight.

The people I see in the day to day life have nothing in common in me or any Australian. They are not White, they do not present the same racial kinship I would have with my brothers. They don’t speak English or their register is not good, they do not present one of the unwritten requirements of being in an English-speaking country. They have a different culture that is antithetical to ours, they don’t present the same feelings we have to Australia Day or Christmas. And yet, day after day, I am expected to call them my fellow citizen. At the end of it all, I gradually hate it even more.

And throughout this agony, there is the constant feeling that there are those who are indifferent to it all. That they freeze up or they panic and simply tread where they are going under. They accept the absurdities, no matter how contradictory or farcical or over-the-top and condone the system for what it is. No matter how much the system hates their guts, they return in the belief that if they give in now, it will save them from any South Africa-style racial attacks. And once the event occurs their fellows will mourn aplenty and ask “Oh why did it happen to her? She did nothing wrong.”

Just as men and women learn to swim and to do backstroke and freestyle, so I would learn to weave through the racial jungle that I now see before me. It will be a blessing for me to see the world for what it is. A rotten, disgusting, festering carcass worshipped by rotten, disgusting slaves. I just need to learn how to swim through it, so to speak.

You can find the Australian Nativist at Telegram.