This is called a Long Range Acoustic Device. 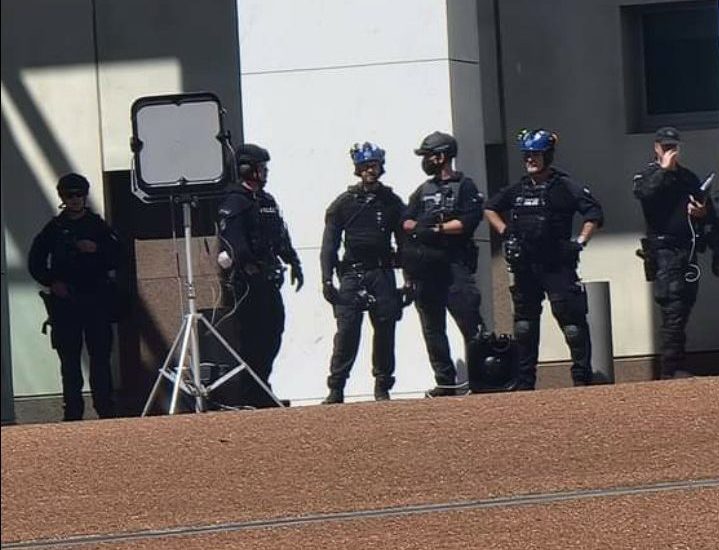 This should be the biggest news story in the country, and the subject of a criminal enquiry.

The photo above was taken in Canberra on Saturday, February 12, 2022 as ordinary Australians protested outside Parliament House against vaccine mandates. Note the head gear worn by some officers, and either the headphones or ear muffs worn by the officer closet to the device.

It is likely a screenshot from a livestream by Aussie Cossack, who pointed out that the LRAD’s were being used against protesters.

He also pointed out that the police lined up in phalanx formation closest to the protesters were wearing earplugs, as though they knew the device would be used, despite the fact that there were children in the crowd.

Another eyewitness has testified that he was experiencing symptoms consistent with those caused by an LRAD on the day of the protest:

In a meeting of the Senate Legal and Constitutional Affairs Legislation Committee held this week at Parliament House, PHON Senator for Queensland Malcolm Roberts asked Federal Police Commissioner Reece Kershaw if the LRAD’s were used against protesters on 12/2/2022:

Kershaw looked extremely uncomfortable and said he’d get back to him.

It’s pretty obvious that they were used. The devices pictured look exactly like those from a 2016 article by the ABC which revealed that Australian Federal Police had indeed bought the weapon: 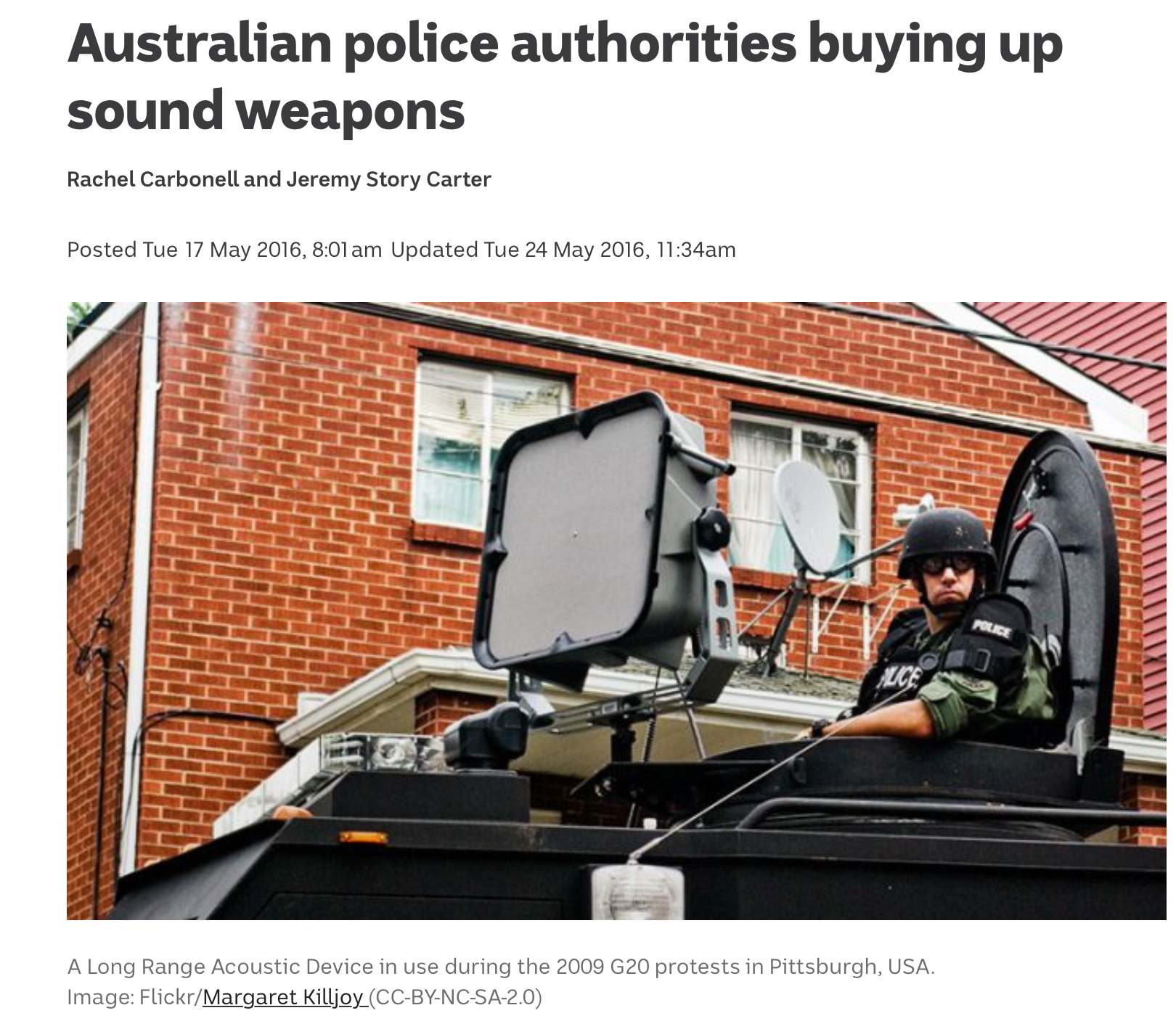 Australia’s police forces are buying up devices capable of causing long-term hearing damage from a distance.

The controversial Long Range Acoustic Device, or LRAD, has been used to disperse crowds in protest situations in the US.

Its use at a Pittsburgh G20 protest in 2009 left University of Missouri English professor Karen Piper with permanent hearing damage.

‘We had seen these machines there [that] looked like an armoured vehicle with a satellite dish on top,’ says Piper, who had been observing the protest from a distance.

“Then this machine emits this long piercing noise. It’s a very high frequency, it really hurts your ears.

‘I started to not feel well immediately after that. I felt dizzy and nauseous and disoriented.’

The LRAD is billed as a non-lethal method to disperse a crowd. Given its unpleasantness, one might be able to justify this on the grounds that it is only used to prevent death or serious injury, yet the side effects on those in its path, like the mandated vaccines against which they are protesting, are permanent:

Piper’s hearing continued to suffer in the following days and months. Tests eventually revealed the effects caused by her exposure to the LRAD were permanent.

‘It’s actually nerve damage, and those nerves will never recover,’ she says.

The AFP has them in their arsenal:

The Law Report contacted all of Australia’s police forces and found more than half now own LRADs.

Victorian, West Australian, South Australian and Queensland police, as well as the Australian Federal Police, admitted to purchasing the device, while New South Wales and Northern Territory police would not comment.

The AFP have the weapon, they were pictured outside Parliament House, wearing earplugs, and were pictured with a weapon that looks exactly like an LRAD. No wonder Kershaw looked like he wanted to get out of there in a hurry.

Melbourne University sound and law expert James Parker says potential use of the LRAD in Australia is deeply troubling.

‘The secrecy of the state around the tools, the weapons that it has and is capable of using on its population is something to be really, really concerned about,’ says Parker.

‘It expands the nature of police/state/military authority in a certain kind of way. It makes sound itself part of the arsenal that police and military and state institutions have.

‘I think there’s a question about whether or not we want sound to be used in this way at all.’

Academia and the ABC used to care about this sort of thing back when they were the apologists for the paramilitary Antifa terrorists who essentially had the run of the streets, meaning that only Marxists could protest without getting beaten up. Now that ordinary people are protesting against the implementation of Communism 2.0, academia and the ABC have been noticeably silent.

It is also telling that Australian police forces felt these weapons were necessary a few years prior to the government putting the entire nation under house arrest to stop the sniffles. Like so many aspects of the plandemic, the infrastructure was already in place well in advance.

Note that the LRAD has military applications. (The fact that it has an acronym should be a dead giveaway):

The LRAD is marketed as a communication device, and was first used at sea by the US Navy and commercial shipping companies to ward off pirates.

Later, the device was deployed by the US military in Iraq and Afghanistan to clear buildings.

‘They could play the LRAD’s alert function at high volume, people wouldn’t be able to stand it, they would run out and the snipers could pick them off,’ says Parker.

Parker says LRADs have since been marketed ‘quite aggressively’ to military and police forces around the world.

None of Australia’s state police forces would provide The Law Report with guidelines for LRAD use, though some said they would only be used for communication, such as in siege situations.

Yet Parker says the nature of the technology and its ability to cause harm to bystanders means it should be the subject of much broader debate.

‘Police and military have been able to hurt people for a long time—they have batons, they have guns—[but] the LRAD is indiscriminate,’ he says.

‘Whoever happens to be in the way of the soundwave is equally likely to be affected, no matter who you are, no matter why you are there. At least a baton should in principle be aimed at somebody, while the LRAD is aimed at everybody.

‘Whether or not my hearing is damaged at a protest because the police use the LRAD, I think there’s something malevolent about the fact that I’m just being compelled through sound to act in a certain way. I’m being treated as a brute biological entity.’

So there you have it. The Australian Federal Police are using a military grade weapon on ordinary people who refuse to inject poison into their bodies. This should be the biggest news story in the country, but naturally the Lying Press are silent on this matter.

Our struggle is not simply about removing the vaccine mandates, nor ending the replacement immigration program which was used to weaken us in preparation for the current global depopulating program. The governments which are implementing Covid Tyranny must be entirely removed, as must the Lying Press which covers for them, the security forces which protect them, plus the organisations and people that our purported “democratic” governments ultimately answer to.

Hint: It’s not us. We get the sound weapons.