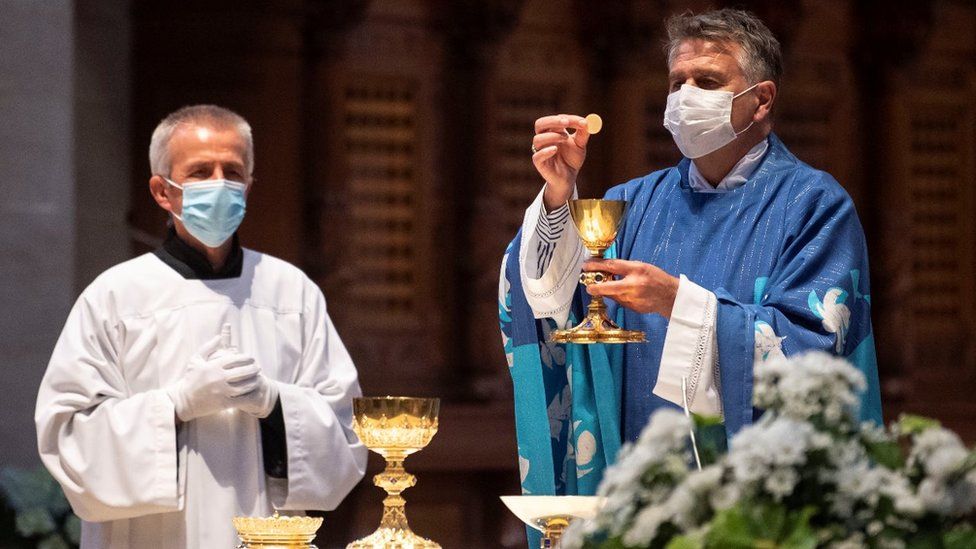 Let me tell you a story about a church. Yesterday I went to a Latin Mass service in a Catholic church in The Hague. It is not my usual place of worship but my little church has services this week for All Saints but no service was scheduled for that Sunday. But I had heard about this church from a good friend so along I went yesterday morning.

To put this story into a proper context it is necessary to speak briefly about my usual church. My usual church is tiny – it barely holds two dozen worshippers. A third of those worshippers are young children. They will help you if you are unfamiliar with the Traditional Latin Mass. They know and understand the rites, the prayers and the ceremony. Two of the young boys often serve as altar boys. They can recite all of the prayers in Latin. They are both under ten years of age.

The mass is the form that the church has practiced for almost two thousand years. The priest faces the altar, not the congregation. The ceremony is full of pathos and meaning. It lifts you up spiritually. Everyone present is there to glory in God and to humble themselves for their own unworthiness in His presence. It is an edifying experience.

It seems that my attendance at this mass for the last eighteen months has spoilt me.

Let me tell you the story of a church that performs the Novus Ordo mass with parts of it in Latin. The call it a Latin High Mass. It is Vatican II with fancy words. The pomp and ceremony of the priest, deacons and acolytes is contrived. Their reverence is a show, put on to please those present as opposed to pleasing God. It is a completely hollow thing in comparison with that which I know and am now familiar with.

All this is bad enough. All of this left me with a sour taste in my mouth. But I remained and persevered. I was there for God, not for myself. The mass was well attended. The large church was perhaps at half capacity which is something I suppose for these secular times. But I got a sudden suspicion of the true nature of things when we got to that part of the Novus Ordo mass where worshippers are to shake hands with one another in a show of community.

There was no shaking of hands. They waved at each other; turning to face each person and raise their hand in a fresh greeting of contrived brotherhood. Because they cannot shake hands because of the Covid. They were well conditioned to this amendment. I looked on in some shock. People waved at me. The most that I could do was to nod. I did not turn around to those behind me. I was frozen in my stupefaction that people could be so blind and ignorant.

The priest was young, in his late thirties. He had the corpulent look of self satisfaction. The time came for the blessing of the host. One of the attendants came forth with something unfamiliar to me. He presented it to the priest in a holy manner.

It was a hand gel dispenser.

The priest made a big show of cleansing his hands of the unholy Covid germs. Only then could he prepare the Host. With that small manner taken care of we came to the next act in the show; the giving of the Holy Communion. Two attendants carried a plexi-glass screen to the side of the dais. I realised that there was a similar screen already in place on the opposite side. I knew what was going to happen but I still could not believe it. The priest and his assistant dispensed the host to the faithful by sliding it under the screen, like a bank teller would pass money to someone affecting a withdrawal. There was a rush of the congregation to be in line to receive such a wonderful blessing.

I stood up. I moved to the aisle in the middle of a line of people. I knelt at the side of the pew. I made it a deep kneel. And then I stood up and turned my back on the altar. I purposely walked out of the church along the right hand side of the main aisle. A man moved hurriedly to get out of my way. A woman who was sitting in the very rear pew glanced at me in understanding. She had a sad and worn look on her face.

I reached the outside and I took a deep gulp of air. I felt that I had not left a house of God so much as I had departed a house of shame. I felt dirtied by my presence in such a place. It bore no resemblance to the deep feeling of spiritual satisfaction that I receive each time when I depart from my tiny church.

That was not a house of God. It was a house of charlatans and imposters. Of lukewarm Christians who will go along to get along. Who put in the appearance as long as there is no substance. It is, I fear, the state of the vast majority of parishes today.

You are not just wasting your time in such places. You are aiding the enemy. It’s time to let the whole rotten structure come crashing down.