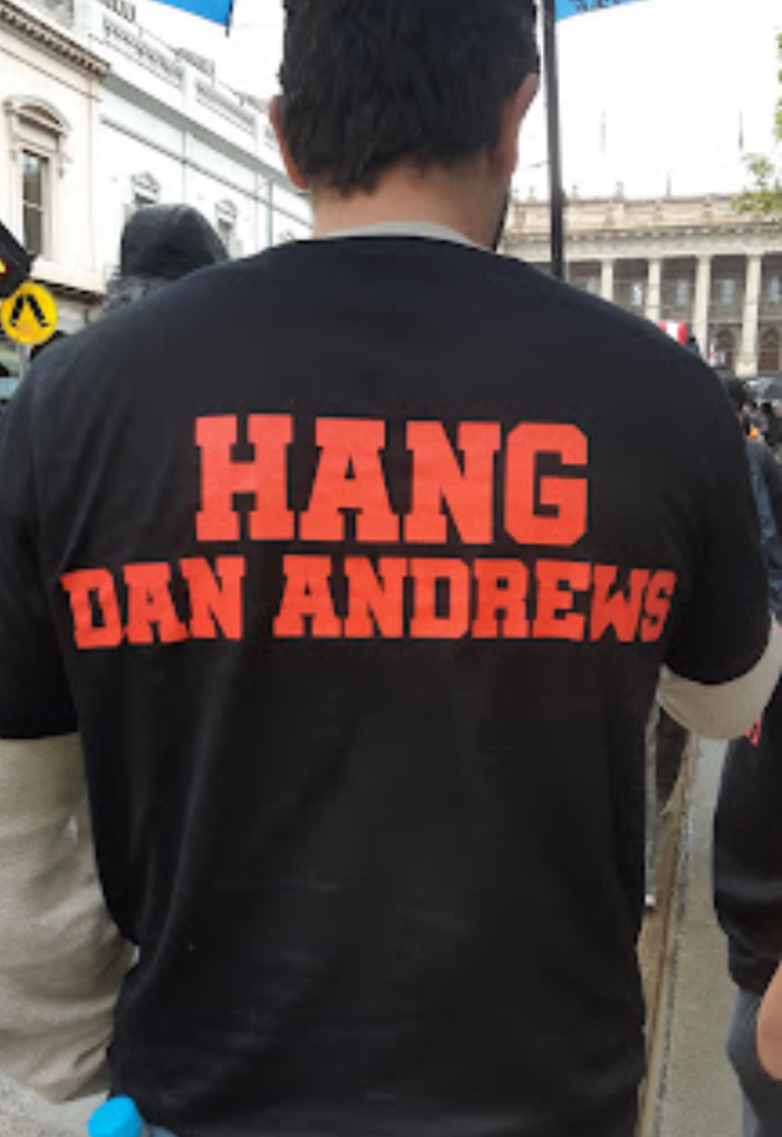 On Saturday the 13th November 2021 I went to the Kill the Bill rally in Melbourne, Australia. The rally was to the ‘Kill the Bill’, meaning it was organised to stop The Public Health and Wellbeing (Pandemic Management) Bill 2021. The bill has already passed the Lower House of the Victorian Parliament. It is to go before the Upper House later this month. I hadn’t attended any of the previous rallies and I was feeling a bit guilty about it. I had two friends who were going and I said that this time I was going. But on the day I was feeling a bit lazy, with the weather outside not helping. It was typical Melbourne weather, sunny, followed by rain, which alternated. Then around midday I got a phone call from one of them saying that he and his teenaged son were in the city and asking ‘where are you?’

I had to admit that I was still at home but as he was there I would get moving and meet him near Parliament, which is where the rally was taking place. On the way I received another call from my other friend asking if I was going in. I was, he was also running late so I didn’t feel so bad now. But it took over an hour to get into the city, the traffic was back to how it had been before the lockdowns. I finally got in, parked at a $10 all day carpark and walked to the corner of Bourke and Exhibition Streets. Which started the game of phone tag between me and my two friends.

I started walking down Bourke Street as the crowd which was to gather at Parliament was heading away from Parliament. No one seemed to know why, but we were happy to do as the organisers wanted. I decided to sit down and wait so that I could catch up with one of my friends. I didn’t have to wait long as within minutes my friend and his son had caught up with me. We then stayed together until the rally ended. The crowd was big, very big, easily in the thousands, possibly in the tens of thousands. It’s hard to estimate when you’re on the ground in the middle of it all. 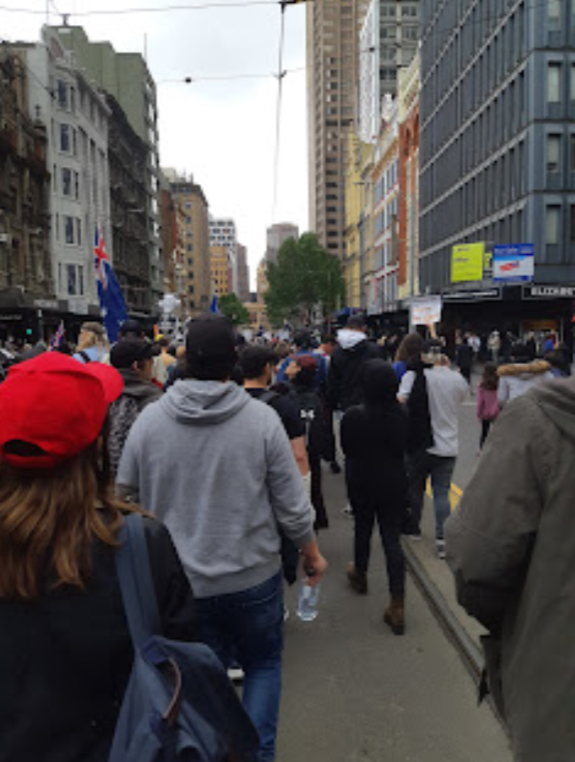 I started to regret my decision to wear a jumper and a heavy coat, but it had been raining when I set out and now the sun was out and it was getting warm. Within 10 minutes of me voicing my concerns it was raining, hard. It continued to rain hard at least three more times during the march, it may have dampened our bodies but it did not dampen our spirits. The crowd was overwhelmingly White, boisterous and very happy to be amongst fellow-thinkers. There were lots of signs and chanting, and whenever a car blew its horn in support it aroused a great cheer from the crowd. They were happy warriors.

We turned from Bourke Street into Elizabeth and headed down towards Flinders Street Railway Station. Someone joked to me that ‘it looks like we’re all catching the train home’. But before we reached the station they turned us around and we headed back the way we had come. But this time we went up Collins Street and headed towards the old Treasury Building and then came towards Parliament from the side.

The three of us decided to move back towards Bourke Street which was much less crowded than Spring Street, which is where Parliament and the old Treasury Building are located. We could hear the speakers quite well, although I have no idea why we had to hear some guy’s bad rap song. The crowd seemed to like the speakers. About 3:30 the rally ended and my friend and his son left, I said that it was good to catch up and then I realised that this was the first time I had seen his son in two years.

Along the way on Collins Street I saw Peta Credlin, the Sky News commentator. On Bourke Street I saw Avi Yemini and his crew interviewing people. After the rally I saw Craig Kelly, the Federal MP who has left the Liberal Party and who has joined the United Australia Party. All of these people were friendly and people could and were talking to them, shaking their hands and getting pictures with them. 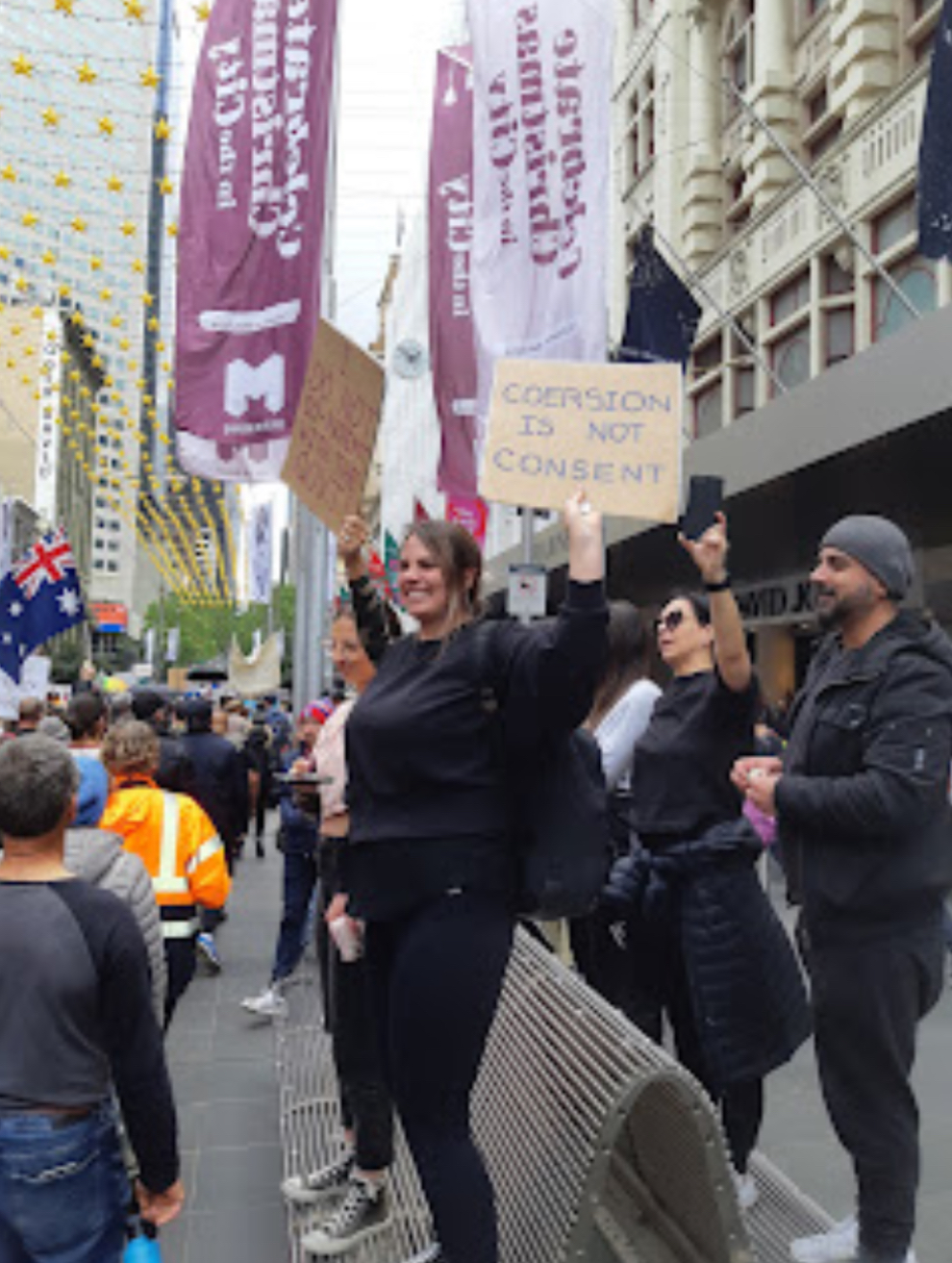