How to pack total reassurance and doubt into the one headline.

Those in the thrall of the Lying Press who have worn their masks faithfully at all times, harangued Covid deniers at every turn and been first in line for the vaccine, are likely to drop to the ground and beg for the booster at the sight of such a mush of contradictions. Nobody’s brain is able to stand up to that kind of multi-pronged barrage:

The first full trial of the jab as a booster found that the additional shot raises immunity by a further 95.6 per cent.

Among 10,000 volunteers followed for almost a year, those who only had two injections were far more likely to test positive and fall ill than those given three.

The thing is, we’ve heard this before.

This is exactly the same as what they told us about the first vaccine. They told us it was 95% effective to get us to take it, then they whittled down its effectiveness to prep us for the booster. The game plan is right out there in the open.

Pfizer admitted that protection from the initial two-dose regimen wanes to about 84 per cent within six months.

The study also found that the booster shot was found to be safe with no safety concerns or severe adverse events reported.

Pfizer’s findings are in line with real-world data from Israel, which found people were 20 times less likely to be hospitalised with Covid if they were boosted.

The key question now is how long the boost to immunity from a third dose lasts, and whether people will need to be revaccinated again at a later date.

I’d give it six months. Covid is forever and boosters are forever. We’re being fed this narrative because Australia’s Covid Regime is hitting us with a one-two combo: Yay we can all go free now but you have to take boosters. 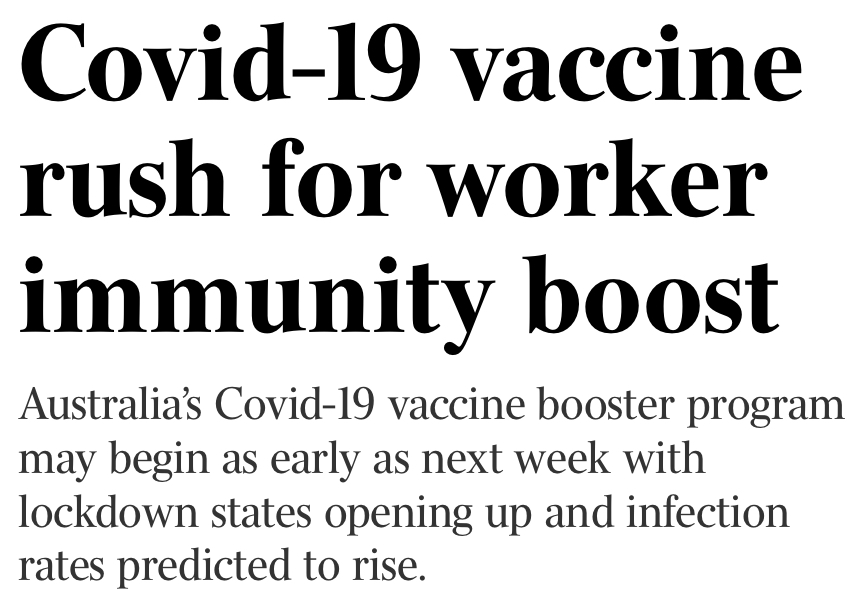 Booster vaccines against Covid 19 will be rolled out to the aged care sector within weeks, with the government expecting to offer third shots for all vaccinated Australians by the end of the year.

The announcement comes as Australia reaches the 70% double-dose vaccination rate for those over the age of 16, meeting a key milestone under the national plan whereby the country transitions to phase B and restrictions begin to ease.

The federal health minister, Greg Hunt, said the government was “in advanced consideration” of an application from Pfizer for the use of its booster shots, and he hoped third doses would be rolled out to the aged care sector in the second week of November after a “critical” meeting next week.

“We’re ready, we’re in a position to commence, and to make sure that that additional protection is provided,” Hunt said.

We’ll give you what you want but you just have to do this one thing for us first. Seems legit.

Then again, maybe they’re right. Maybe we should just trust them, take the boosters and eventually this will all go away.