When multiple police will sit on you for being further than 5 km from your house or for not wearing a face mask, little double standards can become rank hypocrisy very quickly. 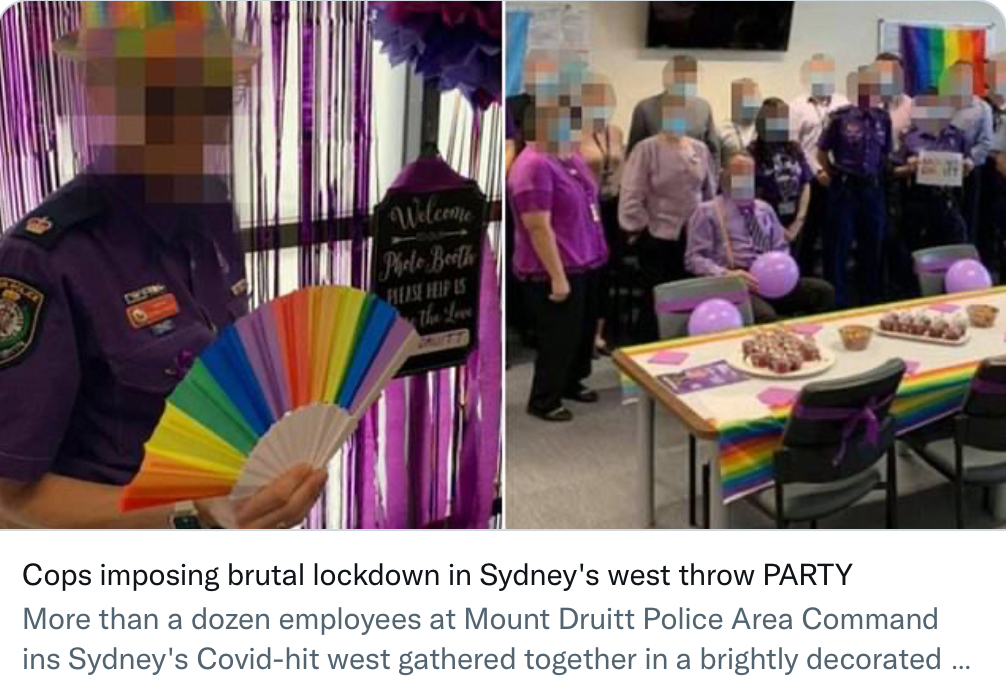 Police officials are reviewing a staff party held at a western Sydney station in July while the city was under strict lockdown to determine if public health orders were breached.

They had the whole month of June, but started to feel left out the moment it was over.

On Friday more than a dozen employees at Mount Druitt Police Area Command gathered together in a brightly decorated common room to share buffet platters of food.

Pictures from the event posted online show staff around a party table at the station, located in one of the 12 Covid-hit LGAs of concern, as they celebrate Wear It Purple Day to support the LGBTQIA+ community.

While emergency services are exempt from the no gathering rule, the exemption was designed so they can carry out their work.

Office functions, however, are discouraged under public health orders and the state’s chief health officer has repeatedly said office workers should not gather in lunchrooms or tearooms.

The police would have known very well they were not acting within the spirit of the law. The Victorian government banned the use of playground equipment for a time because authorities knew that people were using it as a “loophole” to meet up and chat during lockdown.

Chatting to your neighbour down at the park while your kids play on the swings is a “loophole”, apparently. Now you have to “check in” to use the playground. Because ‘loophole”.

A little thing like this matters because of the pettiness with which Australian police have been treating minor or imagined infractions.

This man had a exemption for not wearing a mask , do you think the police bothered looking at it pic.twitter.com/1uPFxNrjcU

It matters because of the brutality with which Australian police have been punishing people who dare to publicly protest against their imprisonment.

Five coppers on one woman, once the police were ready to serve and protect their community. Sadly now it appears it’s to harass and bully the citizens. pic.twitter.com/MY5ptK2ANc

It sends the message to ordinary people that there is one rule for the elites and another rule for the rest of us. That’s not the sort of thing that goes down very well.