A cyber army of nationalists have successfully shut down a network of feminists and American-style leftists on Weibo, the Chinese equivalent of Twitter.

More than a dozen prominent accounts belonging to purple haired women preaching homosexuality, hatred against men, and attacks on the traditional family were banned from the site for violating Weibo’s policy on promoting hate.

The confrontation began when US supported Chinese feminist Xiao Meili posted a video of a woman harassing a random man for smoking a cigarette near a restaurant. The man responded by throwing his drink in her face.

Meili attempted to paint the incident as a social indictment of Chinese men, but instead online users swarmed her comments and began protesting her “xenocentrism” — a term used against people attempting to import American and European Union values to China.

When several prominent Chinese “social justice warriors” rallied to her defense and accused the critics of “intimidating” her, the dispute spiraled into an all out cyber war. Eventually, the feminists were all banned.

The banished accounts include women who promote sexual boycotts of men and marriage, lesbianism, attacks on the Confucian ethic of caring for the elderly, and frivolous sexual harassment accusations.

Western media is up in arms about the affair, blaming the Chinese government for having a role in “silencing” or “censoring” these women. Article 35 of the Chinese constitution guarantees the right to free speech, but Weibo is a privately owned company, meaning that it wouldn’t even be censorship under American law. The feminists have filed an impotent lawsuit against Weibo similar to ones filed by Americans against Silicon Valley monopolies in hopes of being reinstated.

“Human rights” groups, US/European controlled media, and NGOs attempting to spur a political response for merely banning users engaged in what the Chinese perceive as hate speech contradicts their position on online speech in America. Every powerful institution in the West supports ruthlessly suppressing pro-normal beliefs in America and Europe, including affirming that men cannot be transformed into women through drugs and mutilation. As politicians, corporations and feminist activists in the United States like to remind us, the right to free speech is not a right to a platform.

Under Xi Jinping, the Chinese government has sought to avoid a looming demographic winter by increasing national birth rates. Defending the dignity of the traditional Chinese family, which includes a husband, a wife, children and often older relatives, has been made a national priority by president Xi. This embrace of tradition is a drastic departure from Mao Zedong’s Marxist campaign to “liberate” women from marriage and force them to go to work instead.

China is quickly becoming a photo-negative of America. Billionaires who try to exert political influence have their monopolies busted instead. Anti-social people are bullied and humiliated. Chinese manhood is celebrated and the Han majority is taught to be proud of their race rather than ashamed of it.

History will soon decide which civilizational model is superior. 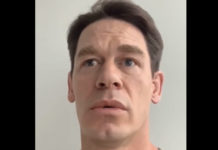 John Cena was always a cuck