This Lying Press outlet should probably remove the photos, people may start to recognise a pattern. (The identity of the Lying Press outlet has been removed from this screenshot, and we will not link to it, so as to avoid amplifying harmful misinformation and dangerous conspiracy theories spread by the Lying Press.)

Aside from the photos, particularly the one on the right, being rather bizarre, the situation itself is rather bizarre. Several weeks ago when ten black men allegedly pack raped two teenage girls at a quarry in Queensland, the Lying Press claimed it could not publish images of the alleged perpetrators for legal reason, and just showed a Google Maps-sourced image of the alleged quarry. Here too, we see a pattern. 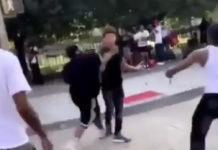 In the jungle your skin colour is your uniform